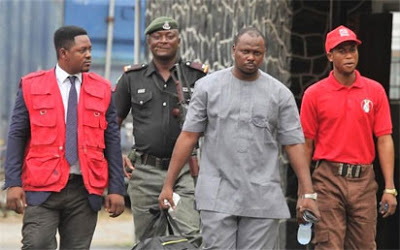 He was sentenced today by Justice Mojisola Dada of the Lagos State High Court, Ikeja, Lagos. The convict, who was arraigned by the Economic and Financial Crimes Commission on February 26, 2018, on an 11-count charge, was accused of altering instructions and falsifying signatures of customers to transfer money into various accounts outside the bank.

The money was allegedly transferred in tranches into through two banks accounts.

Delivering her judgment , the judge sentenced him to seven years imprisonment on each count of the charge.

The sentences are to run concurrently from the day of arrest. The Judge further held that all properties traced to the defendant be confiscated till it amounts to the sum of N700million and should be restituted to the plaintiff, Coronation Merchant Bank.