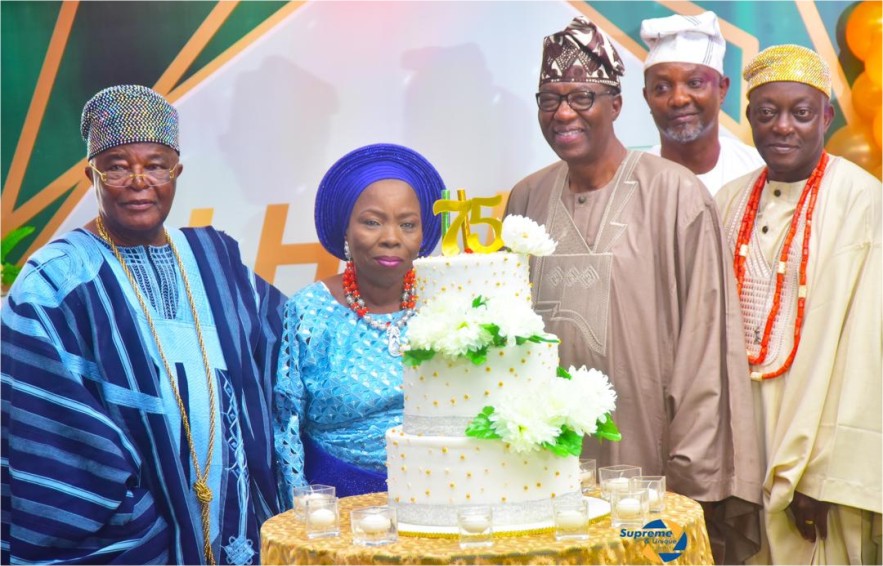 On Friday, 16th of November, Abeokuta stood still for ex-Ogun Commissioner for Youth and Sports, Bukola Olopade as he hosted the who is who in and outside Abeokuta for his mom, Alhaja M. A. Olopade’s 75th birthday. The event was held at The Marquee, Olusegun Obasanjo Presidential Library and an after-party was held at the brand new The Underground Lounge, at the new Conference Hotel, Abeokuta. Alake of Egbaland, Oba Adedotun Aremu Gbadebo was the chairman of the day, dignitaries at the event were Oba Babajide Bakre, the Agura of Gbagura land, former Governor Gbenga Daniel, Senator Gbenga Obadara, Chief Rotimi Williams to mention a few, with popular high life band, Faith Band on bandstand, BUNMI MUSTAPHA brings you gist from the 75th birthday.

ALAKE OFFICIATES CUTTING OF THE CAKE

The Alake of Egbaland, Oba Adedotun Aremu Gbadebo was not only one of the special guests at the occasion, but he was also the only paramount ruler at the event, and he also played a huge role. He was the Chairman of the occasion and also the one who officiated the cutting of the celebrant’s cake. He came with his entourage and they spent quality time.

The new Agura of Gbagura land, Oba Babajide Bakre also came to celebrate with Mama Olopade, he was among dignitaries who came early and spent quality time too.

OTUNBA GBENGA DANIEL NOT LEFT OUT

Former Governor of Ogun State, Otunba Gbenga Daniel, under whom one of Mama’s sons Bukola Olopaded serve as a two-term Commissioner for Youth and Sports during Otunba Gbenga Daniel’s administrative also came. It is no longer news that the former Governor OGD shares a strong bond with Bukola Olopade and the relationship continued after a new government took over and till date, they remain inseparable. This explains why OGD came early and didn’t leave till evening.

Jokotade Odebunmi was the running mate of Prince Gboyega Nasir Isiaka otherwise known as GNI, in the 2015 gubernatorial race. Although she is not a party person, she chooses the functions she attends. But she was at this event with her husband, Tokunbo Odebunmi a prominent businessman in Egbaland. Jokotade Odebunmi was one of Otunba Gbenga Daniel’s Commissioners during his tenure as the Governor of Ogun State.

Former Speaker of the Ogun House of Assembly, honourable Titi Oseni Gomez was also at the event with her husband. Not many people know that the former lawmaker is a good stepper on the dance floor. She enjoyed every bit of the party while dancing all through to the beautiful tunes from the DJ.

CHIEF ROTIMI WILLIAMS NOT LEFT OUT

Lagos socialite and Owu prominent son, Otunba Rotimi Williams, the new Jagunmolu of Owu Kingdom also came to grace the event. He was among dignitaries on the high table with the celebrant, and one can tell he is close to Bukola Olopade. He was also among the first set of people to step on the dance floor.

WITH LOVE FROM NILAYO CREW AND STAFF

Nilayo Sports Management Company is a company owned by Bukola Olopade, one of the celebrant’s son. The staff and crew of the company troop out en-masse to celebrate with their boss.

Aare Remilekun Bakare is one of the veteran politicians and a prominent son of Egba, he once aspired to run for governorship 8-years ago. Aare, as he is fondly called, was also at the event.

Chief Tosin Fadare, the Seriki of Egbaland was also among Egba high chiefs who came to celebrate Mama. He came with his friends and they all enjoyed every bit of the party.

Hon Femi Ilori and Hon Nike Osoba are best of friends. they are both also onetime special advisers to Governor Amosun. They hardly attend functions separately, those who are close to them can tell they are both party rocker. They were at the event to celebrate with Mama.

THE THREE CELEBRITIES WHO CAME

Not many people know that Senator Gbenga Obadara is related to Bukola Olopade. This explains why he did not only come as a special guest. But also had a table reserved in his name and his friends also came to the event.

DJ MJAY ON THE WHEEL OF STEEL

Ogun finest and number one Female Dj, Dj Mjay was on the wheel of steel. The event will remain memorable for guests as she kept them on their feet all through the event and no doubt they enjoyed every bit of it as they were yearning for more. She was also the Dj at the after party which was held at the Conference Hotel.

Seyi Johnson is the project manager of Nilayo Sports Management Company. He is in charge Lagos Marathon, Abeokuta Marathon and the upcoming Remo Marathon. He is very close to Bukola Olopade and people refer to them as brothers. At the event he was very supportive and everywhere, ensuring guests were well taken care of and no one was left unattended to.

Bukola Olopade’s wife, Yetunde Olopade is known to be a very stylish woman. The pretty ebony woman did not disappoint guests at the event as her family aso ebi was perfectly styled and she looked beautiful with her simple and flawless make up.

Lekan Olude is the special adviser to governor Dapo Abiodun on job creation and youth empowerment. He is very close to Bukola Olopade. Their relationship dates back to when Bukola was still Commissioner. Lekan Olude was the only Special Adviser to Governor Abiodun at the event.

WHAT MAMA’S FIRST SON SAID ABOUT HER

The celebrant’s first son, Kayode Olopade, in his speech eulogized his mother. He called his mother the best mother in the world. In his speech he said “My mom has always been a prayerful woman and disciplinarian too, she is always praying for us, and evidently you can see her prayer to God on her children have been answered, and still being answered to the glory of God. She is a mother to a lot of people, including our friends. She has children across the country, she is very hospitable as a lot of you here can testify and confirm.  She is also a very good companion as my wife will say, as she can engage you with meaningful gist. Mummy can gist, even when you are feeling low, she is very loving and accommodating. She speaks many Nigerian languages, amongst which are Igbo, Hausa, Itsekiri, Urhobo, Ora and even Jetu dialect, my mother is an all-rounder. Like I said obviously she speaks Yoruba and even Egba dialect, which makes people find themselves, easily relaxed with her. She is a good manager of resources, including human resources. My father never attempted to build any of his numerous houses without her impute at all levels, both design-wise and financial management, we are also enjoying her wisdom, as our own properties and business decisions too enjoy same ingenious impute from her. She makes sure she leaves you better than she met you by bringing the best out of you, that is my mother. We love you dearly Mummy, our spouses, children and grandchildren also love you too. You will enjoy a good life to the very end of your days in Jesus name, and you will become a great grandmother in the mighty name of Jesus. God bless you, Mummy, as such, to a mother who protected us and supported us, instructed us and was loyal to us all through and true, we thank you because you are the world’s best mother. To all young mothers here, I will advise you to protect your kids, support them and teach them the way of the lord, scold them when necessary, and remain loyal to them. Don’t give up, because our mother never gave up on us, thank you very much for joining us to celebrate her today, remain blessed in Jesus name”.

NIKE OLOPADE’S TOAST TO HER GRANDMOTHER

Nike Olopade is the first daughter of Bukola Olopade, and she was given the role to represent the other grandchildren in presenting a gift to their grandmother and she also made the toast to a long life, and for mama Olopade to be there for them many many more years to come as they celebrate her 75th.