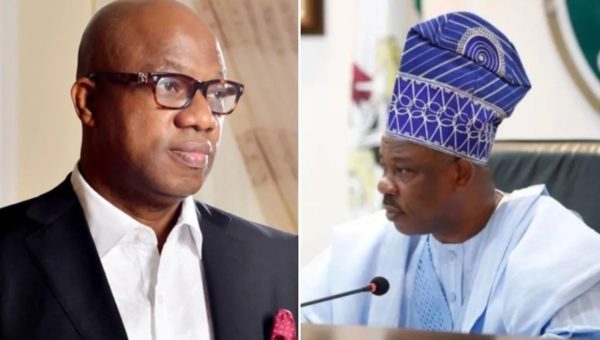 Political gladiators and spectators were in shock after a news report held that the newly elected Governor of Ogun State, Prince Dapo Abiodun met empty treasury on his assumption of office as the executive Governor.

Prince Abiodun, who was silent on the amount he met in the state’s account, said he had to borrow money from his friends who are Managing Directors in some commercial banks, in order to pay May salary, which he puts at over N7billion. He, however, vowed not to make issues out of his predecessor, Senator Ibikunle Amosun’s actions or inactions

The ex-Governor, for reasons best known to him, deemed it necessary to respond to the allegation in a long text, made available through Mr. Adewale Oshinowo, Amosun’s Commissioner for finance (2015-2019), to counter the allegation and set the record straight

Our attention has been drawn to the widely circulated reports in the media that the Prince Dapo Abiodun-led administration in Ogun State inherited an “empty treasury” and its only recourse was a bank loan of N7 billion in order to pay workers’ salaries in May 2019. Nothing could be further from the truth!  Indeed, during a political parley in Abeokuta on  24 June 2019, ostensibly convened to discredit and denigrate his predecessor, Governor Abiodun was widely reported in the media to have made the infamous comments reproduced below:  “So, I picked my phone and called my friends who are MDs in different banks. I told them I needed to pay salaries and this is the little I have; almost nothing in the state account. I requested for a credit facility to allow me to pay over N7bn which is the state wage bill. That day, my intention was that may be one or two will oblige me, but the five banks I called obliged me.” Contrary to the “empty treasury” slogan, the Dapo Abiodun led government inherited over N8.218 billion, comprising N5.735 billion from the Federation Account (FAAC/JAAC) and N2.483 billion from the Ministries Departments and Agencies (MDAs). What is more, the N10.6 billion refund for Pay As You Earn (PAYE) due to Ogun State, which the Amosun government had labored for three years to obtain, and which was due to be paid in May 2019, should have been part of the amount inherited by the Dapo Abiodun led administration. Ironically, the then ‘incoming’ government did everything possible to frustrate its release and create an enabling platform for the futile “empty treasury” campaign unveiled after taking over the reins of government. The N10.6 billion, which is the third highest amount refunded to some States among the country has since been released to the Gov. Abiodun led administration. Therefore, the Amosun administration can validly assert that it effectively left N18.8 billion in the coffers of Ogun State Government. Notwithstanding its covert campaign against the release of the N10.6 billion in May, the Dapo Abiodun led government had no justification for borrowing a dime from banks to pay May salaries as the amount left in the government coffers and the normal tax remittances due by the end of every month were more than enough to significantly offset the monthly wage bill.  The government of Dapo Abiodun would, therefore, need to explain to the public the reason and motive behind the N7 billion loan he claimed to have obtained on 30 May 2019 (with undisclosed interest rates) a day after his inauguration!

It is the usual practice that for such large sums of money to be borrowed from financial institutions, the Ogun State Executive Council must debate and ratify it and the concurrent approval of the Ogun State House of Assembly must be obtained. At the National level, both the Federal Ministry of Finance and Debt Management Office (DMO) must also give written approval as part of the process for obtaining a loan. Clearly, none of these mandatory approvals were complied with before the said suspicious and questionable loans were “supposedly” taken. Indeed this calls to question the compliance level of the Dapo Abiodun led administration with extant laws and financial regulations. Gov. Dapo Abiodun’s claim that there were discrepancies and variances on the state monthly payroll is another area of concern that requires clarifications. In a statement on 25 June 2019, one Kunle Somorin, Chief Press Secretary to Gov. Dapo Abiodun said inter-alia … “They aren’t talking about the inflated wage bill. Amosun claims to be paying N2.5billion higher than what was borrowed to pay in full”  What the present Government has clearly failed to comprehend is that in addition to the salary obligations of the Civil Service, the State also pays emoluments and allowances for the other two tiers of Government; the entire Public Service consisting of various Parastatals, Agencies, and other auxiliary workers. Also noteworthy is the fact that Government as part of its monthly obligations pays for other essential services.  Therefore, the current administration should endeavor not to play politics with the State accounting processes as it will have grave  consequences and  economic implications for stakeholders, such as investors, donor agencies, international and multilateral financial agencies, all of whom by the twilight of the Amosun Administration rated Ogun State as the Number One destination for sub-national investments in Nigeria. A house destroyed may be difficult to rebuild. We therefore advise the Dapo Abiodun led administration to focus on germane economic fundamentals and strategies that will uplift the State and concentrate on building on the solid foundation laid by his predecessor rather than chasing shadows.

INSECURITY: CAN Furious With Govt As Gunmen Another Pastor & Kidnap Wife In Kaduna