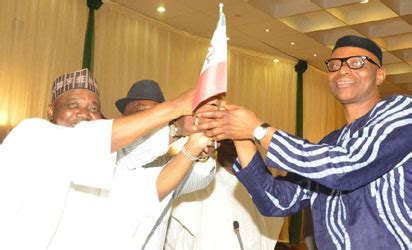 The Ondo state chapter of Labour Party (LP) has presented Olusegun Mimiko, former governor of the state, with a membership card.

Mimiko defected from the Peoples Democratic Party (PDP) on Wednesday, saying he left the party for “personal reasons”.

However, his move to return to LP was opposed by Mike Omotosho, national chairman of a faction of the party.

At a press conference in Abuja on Wednesday, Omotosho said the party was not interested in having Mimiko under its umbrella.

“We urge politicians like the former governor of Ondo state to stay clear of the new Labour Party because we are aware of their gimmicks to lure the Labour Party in the direction of other political parties with the hope of rehabilitating their dwindling political relevance,” he said.

He had accused Mimiko of abandoning the party a few days to its national convention in October 2014, saying that “such a treachery and betrayal of a party that gave the former governor succour in the darkest hour of his political career especially as manifest in his two-term victory on the ticket of Labour Party is to say the least, cheap and callous”.