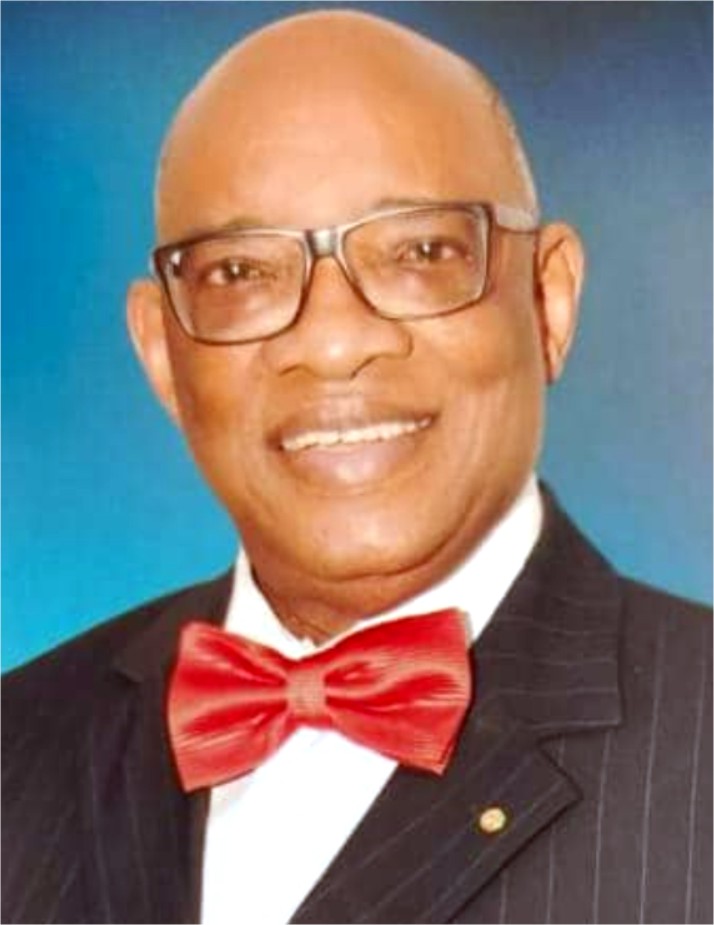 These are not the best of times for the Ogunjobi family. They recently lost a dear one. A father, grandfather and man of God. Elder (Dr.) Olabisi OGUNJOBI, OON, FNES was an accomplished Development Economist, Consultant, Public Policy Analyst, Author and Philanthropist.

He was born on 6th January 1947 in Ikare Akoko, Ondo State, to Chief Aliu Fele-Jobi, Baba Ewe of Ikare, and Mrs. Bilikisu Kaliat Fulani Fele-Jobi. He was a descendant of the Iyofen Family, an extended Fele-Jobi family in the Ishakunmi community of Ikare. His father was a wealthy flamboyant businessman who traded in Cocoa. He was nicknamed ‘Fele’. ‘Jobi’ was taken from his actual surname, Ogunjobi. Thus, he was known as ‘Fele-Jobi’. This accounts for why some of his siblings have ‘Jobi-Fele’ or Jobi as a surname, while others maintained ‘Ogunjobi’.

Elder (Dr.) Ogunjobi enrolled in Emmanuel Anglican Primary School, Ikare in 1953 and completed his primary education in 1959. He proceeded to Victory College, Ikare in pursuit of his Secondary Education and later was admitted as one of the pioneer students to the newly established Ado-Ekiti Grammar School in 1960. He passed out of Ado-Ekiti Grammar School in 1965 and proceeded to Ibadan Grammar School for his Higher School Certificates (HSC) where is interest in Economics grew.year. He gained admission to study Economics at the University of Ibadan in 1967 as a direct entry student, and graduated from the University of Ibadan in 1970.

Olabisi Ogunjobi met his wife, Mercy Olabisi on 22 October, 1977. They got married on 3 February, 1979 in Ondo State. Their marriagewas blessed with three sons.

After graduation, he worked briefly in the private sector before joining the Central Bank of Nigeria in January 1971 where he quickly rose to become a Senior Economist at the Research Department of the Bank.

He started his international professional career in 1975 when he was seconded to the Conference on International Economic Cooperation (CIEC), better known as the North South Dialogue in Paris, France as Adviser on Finance and Development to the 27 developing countries negotiating with the developed countries.

This international exposure provided the opportunityfor him to join the African Development Bank, in Abidjan, Cote d’Ivoire as an Economist in 1978 in the Research Department of the bank. During his 28 years of service at the AfDB, he worked in several Policy and Operations positions.In 1983, he opened the first Regional Office in Southern Africa, as the Regional Representative for Southern Africa based in Harare, Zimbabwe; he was promoted to Director, Country Programmes North and West Africa; Director, Economic Policy, 1997-1999; Director of Operations; and Adviser to Vice-President Operations, before being appointed as Vice President Operations West and Central Africa. As Vice President, he was responsible for the Bank’s strategic and operational policies and supervised the management of the annual lending program of about USD 1.5 billion. In 2005, he was Nigeria’s candidate for the Presidency of the AfDB.

After retirement as Vice President of the AfDB, he was the Focal Point for Islamic Development Bank in Nigeria and served as the Chairman of the Federal Mortgage Bank of Nigeria (FMBN). He held several Corporate Board appointments including the Boards of Directors of Zimbabwe Development Bank, Development Bank of Zambia, African Export-Import Bank, and Global Trust Bank Ltd in Uganda. He was the Lead Partner, Mcfeley Development Associates; Chairman, SeedVest Microfinance Bank, Chairman of Pearl & Apricot Limited; and Vitachem Nigeria Limited.

He was the Maiyegun of Okeagbe, Ondo State; Tamanji (Pathfinder) of Bamenda, Cameroon and Kobori of Aiyedun Oke Ekiti State. He was fluent in English and French.

He founded the Bisi Ogunjobi Foundation (BOF) a youth education empowerment NGO, started in 1993 that has provided scholarships to over 1,000 university students and. many physically challenged recipients. The BOF Community Medical Initiative focuses on support for Sickle Cell Disorder, High blood pressure and Diabetes.

Hereceived awards from several organisations including: (i) Honorary Doctorate Degree in Business Administration from AdekunleAjasin University (ii) University of Ibadan Life Achievement Award (iii) Fellow of the prestigious Nigeria Economic Society (iv) 2010 Kwame Nkrumah Leadership Award for Youth Empowerment and Development (v) National Association of Ondo State Students for Philanthropy; (vi) Christian Association of Nigeria (CAN) Integrity Award and (vii) National Association of Nigeria Students (NANS) Humanitarian Service Award Chief Bisi OGUNJOBI was a recipient of the National honour of Officer of the Order of Niger (OON) of the Federal Republic Nigeria. He also received national honours from several other countries including: (i) Chevalier de l’Ordre National of the Republic of Burkina Faso (ii) Chevalier de l’Ordre National of the Republic of Mali; and (iii) Officier de l’Ordre du Mérite of the Republic of Niger.

In July 2022, he was honoured with a Festschrift of great accolades and respect initiated and accomplished by the Department of Economics, Glorious Vision University, Ogwa. It was an honour given to himfor meritorious service in the academic institutions, corporate world and public sector.

Dr. Bisi Ogunjobi was an Elder in The Apostolic Church Nigeria (TACN) and Baba Ijo of Emmanuel Church Ikare Akoko Ondo State. May his gentle soul rest in perfect peace.

Unveiling The Guys Who Tie Gele For Celeb Women

How The FULANI People Came To Control ILORIN