Family and Friends in Tears as Popular Nollywood Actor, Olumide Bakare is Buried in Ibadan (Photos) 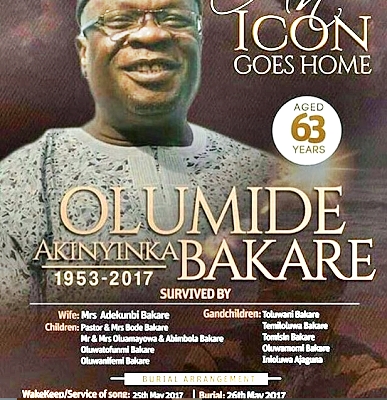 With heavy hearts and eyes full of tears, the family of late award-winning Nollywood actor, Olumide Bakare, has laid his remains to eternal rest in Ibadan.

Popular Nollywood actor, Olumide Bakare, who died after a prolonged heart ailment in the early hours of Saturday, April 22, 2017, has been finally laid to eternal rest in his hometown of Ibadan, the Oyo state capital on Friday.
A funeral service was earlier this morning, held for the late multi-award winning actor at St. James Anglican Cathedral Church, and afterwards, he was buried at St. James Cemetery, Ijokodo, Ibadan. A wake-keep / service of songs was held on Thursday, May 25, 2017, at St. James Cathedral, Oke Bola Ibadan.
Before his death, Bakare was ill for over a year. He was discharged from the University College Hospital (UCH) in 2016. On April 22, Bakare was rushed to the hospital after his health got worse, but he was declared dead on arrival.
The late actor was popular for his role in “Edun Ara,” “Edun Ara,” “Gbogbolomo” among others. Olumide Bakare is survived by his wife, Adekunbi Bakare and four children.
more photos below…. Photo credit: Goldmyne TV
Family and Friends in Tears as Popular Nollywood Actor, Olumide Bakare is Buried in Ibadan (Photos) was last modified: May 26th, 2017 by Arinze Ago

Where Are These Celebrity Big Boys?