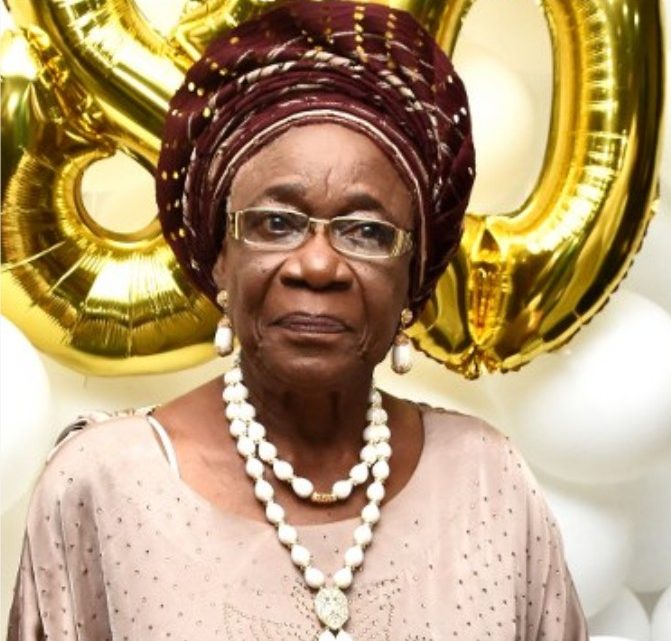 On Saturday, 21st May, 2022, all roads led to the Eko Club in Surulere, Lagos where the Grandi Margarzzini Founder, Mrs. Modupe Gbadamosi celebrated her 80th. The party had all the trappings of royalty and people really came out to celebrate the octogenarian, in spite of the heavy rain. Few days after the party, City People’s Contributing Editor, IYABO OYAWALE caught up with Mrs. Gbadamosi for this short chat, in which she reflects on her life at 80. Enjoy it!

Now that you’re 80, are there things you want to stop doing?

I cannot stop doing stuff. I’m so active. If I stop doing what I’m doing now, age will tell on me. So, I must be on the road. I’ve been a workaholic from day one. I don’t want to age at home.

How do you get the energy to do everything you do? I watched you at the party going up and down.

It’s by the grace of God. Yes, I was very active at the party and was told to go and sit down but I refused. If I sit down, all my invitees will feel as if I just abandoned them. They must be all right now.

So, how do you get the energy at this age?

I don’t joke with my vitamins, almost 10 every day. See all my vitamins. I’ve been taking them for over 15 years. Every day, I take 10 different types of supplements.

When you look back at your life, do you think you have any regrets?

No, I just thank God for keeping me alive because everybody has her own ups and downs. I thank God that in every situation, I’m on top. I give glory to God.

What are some of the ups and downs you have gone through?

In my husband’s family, it’s one of the turbulences you must go through. When I was also doing the bead business and travelling to Italy and the US, I used to carry heavy loads and that made me develop backache. At times, you carry your load on your head, no alaaru (paid load carrier) but I thank God that all my children. I’m a single mother. I spent all my time investing on their education.

So, how did the idea to start the bead business come?

I was a beader in the 60s. I started beading in 1968. I was the first to get into this business before those Balogun people came into the business. During that time, people weren’t really into wearing beads. I was the first person to bring the idea.

I’m surprised at the name Grandi Margarzzini because it’s not Nigerian.

So, you trained as a beader?

No, it’s a gift o. In those days that I used to travel to Italy, I used to put my eyes on those beaders over there. I used to watch what they’re doing. That’s how I started. At times, ideas strike me while I’m sleeping. I will wake up immediately and start beading. Today, all my children and grandchildren know how to bead. I was the first person to start the bead business. I used to make single beads and then started making double. Balogun bead sellers will come and buy plenty from me. I also trained people who also trained others. I started a school for people who wanted to learn how to bead on Adeniran Ogunsanya in Surulere at the time. In those days, people thought it wasn’t lucrative but I got into the business because if you put on bead and another person puts on gold, it’s the person wearing beads that will attract maximum attention.

So, that bead you wore on Saturday.

I did it myself now. It’s called sea pearl. It’s the same as the earring I’m wearing now. I even gave some out at the party.

Now that you’re retired from Grandi Margarzzini, how do you spend your day?

I’m doing turban for women. You can see what I was doing when you came in. It’s a customer that asked me to make them. It’s an order. The woman is going to America. I still go to Dubai. That dress I wore at the party was made in Dubai.

You have friends in powerful places, how did you cultivate those friendships?

It’s through this beading business. I used to bead for the Obas. The Alake of Egbaland and Olori Tokunbo are family friends. I used to bead for the late Oba Sijuwade too. I knew Abike Dabiri since her NTA days. The late Otunba Kuforiji-Olubi also patronized me. So also are former and present first Ladies of States. I mostly deal with clients who want beads that are unique; uncommon. I have genuine stones.

You have a charitable spirit; you do charity a lot. How did that part of you develop?

The charity I used to do in those days, if you’re having a function, I’ll participate. I’m a giver.  Nothing is too hard for me to give out. The more I give, the more God blesses me with. The Pacelli school of the Blind, I used to take stuff there once a while. I’m a giver, there’s no doubt about that fact. There’s nothing big for me to give out. I gave out 30 of these turbans at the party.

Earlier, you said something about being a single other.

Yes, I raised my children singlehandedly. I lost my first marriage but my second one was a Muslim and he kept marrying wife upon wife so I checked out.

But the first man is called Gbadamosi.

No. His name was Adenle, the son of the Ataoja of Osogbo. The second one was Gbadamosi and he’s also dead, about 12 years ago.

Now, tell us the story of your life. Where were you born, etc?

I was born in Aba.

I also wanted to ask about your Eastern roots because some people from the East were recognized at the party.

We’re from Ajase. My father is an Egun man from Abina side, Itakose. He just went there to work and I was born there.

Looking back, would you say you’ve lived a fulfilled life?

Yes oo, thank God for the gift of life. All my children are doing fine. There’s no emergency call. I also don’ have any sickness, except the backache I earlier told you about. When I was doing the bead business, carrying luggage, that caused me a backache. Aside from that, I’m a workaholic. I can walk from here to Adeniran Ogunsanya, my friends would complain and I’ll tell them to just leave me. The more I walk, the more healthier I become. Some people are fat and cannot lift themselves up. They’ll be breathing heavily. I don’t want that. Didn’t you see me at the party, going up and down? Some people asked me to sit down but I refused. If I sit down, how will I satisfy my guests?

So, this turban business you’re presently doing, did you give it a name or it’s an extension of Grandi Margarzzini?

It’s an extension of Grandi Margarzzini. I got this order I’m preparing from the ones I gave out free at the party. The lady is going to America. When she saw the ones I gave out, she requested that I make different styles for her.

How I Was Spiritually Attacked – Veteran Actor, ALAPINNI OOSA