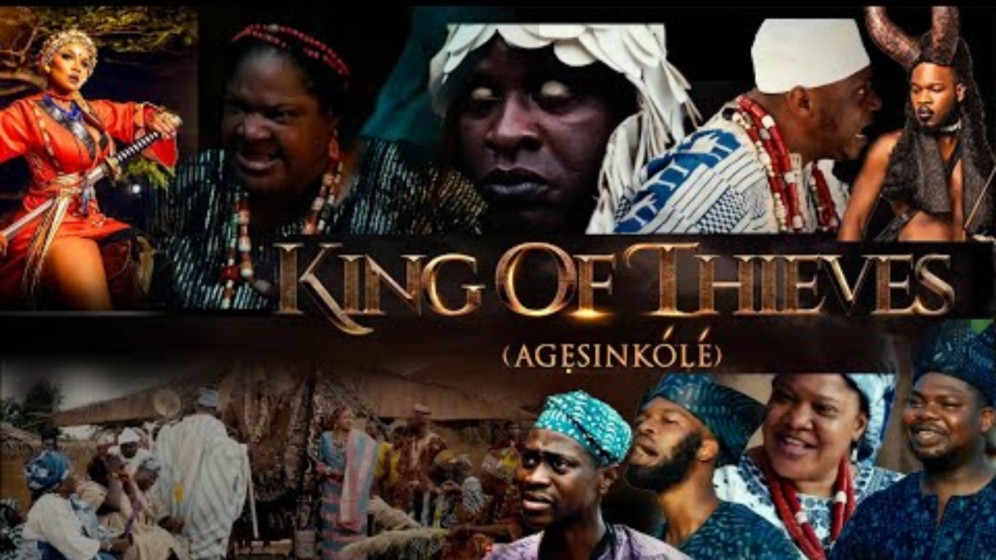 The Yoruba movie was also co-produced by Niyi Akinmolayan. “King of Thieves” opened with the highest ticket sales for a Nollywood film in 2022. It is also the highest-grossing indigenous themed film and only the 10th Nollywood film to hit past 200 million within a month at the Cinema. According to the ace actor, the epic thriller showcases the creativity of the Yoruba culture to the entire world and announces the crop of talents existent in the Yoruba genre. The movie features Toyin Abraham, Lateef Adedimeji, Adebayo Salami, Broda Shagi, Femi Adebayo, and Segun Arinze among other A list stars.

In the history of Nollywood, no movie has ever made 43 million naira within 3 days of its opening at the Cinema that is an amount of money some movies will make in three months. This movie has actually paved the way for many filmmakers producing indigenous content.

According to the Award-winning filmmaker. “When I was much younger, I had the opportunity to see the beautiful works of Hubert Ogunde, he showcased that beauty in Yoruba culture being a Yoruba man”. He also said he had to embark on wide research on Ifa as a Muslim, also finding a location to shoot the film which took a lot of time, was one of the many challenges, he faced during the production of this great movie.

He disclosed that the movie took him more than a year to produce. Also, the plan was to do a huge movie “that will remind people of the beauty of Yoruba culture and I waited till it was time”. He said the movie was his first traditional film, adding that it has always been his dream to produce that kind of movie for so many years in the industry. Hear him: “My intention was to showcase the beauty of Yoruba culture to the entire world and at the same time to be able to say one or two things about the society, especially our leaders.” Speaking further of the challenges, he revealed that finding a location to shoot the film took them a lot of time, but eventually he saw everything he wanted in the location, the village, the river and other vital things.

The movie which is star-studded was not an easy task to conquer. He said it was challenging to get them all on set together, waiting for them to have a uniform timing took almost one and half years to plan the movie.

The movie “The King of Thieves” is an epic tale of Agesinkole, an all-powerful bandit and his reign of terror in the prosperous kingdom of Ajeromi. Concerned by his pillaging, the kingdom moves to destroy him, through the hunters, witches and priests, thus beginning this adventurous saga of revenge, bravery and glory. Many were not surprised at the massive success the movie has recorded, considering the hardwork put into the production, and the quality of the casts, who all interpreted their roles so perfectly. From acting to production to storytelling to props quality, the costumes, effects, the acting, soundtracks, and background chanter music, the movie has been able to prove that the Yoruba genre has improved drastically.

Ordinarily, most of our highly talented Yoruba stars cum filmmakers only believe, they can only make a name for themselves in the Yoruba movie industry, then go to the English sector, to produce a Cinema standard English movie and make good money but with this great movie, Femi Adebayo has changed the narrative, so Yoruba movie producers can also produce award-winning cinema movies in the Yoruba language. This movie has not only increased Femi Adebayo’s rating in the industry but also serves as a breakthrough for the Yoruba filmmakers, who will want to sustain the standard. Femi Adebayo has remained one of the outstanding filmmakers in the industry, producing and featuring in blockbuster movies back to back. He is also one fo the most successful stars in the Yoruba movie industry. He has excelled as an actor, producer, and politician. A lawyer turned actor who has remained an inspiration to many upcoming stars in the industry.

He didn’t rely on his father’s success in the industry. Instead, he worked so hard to make a name for himself. He and his siblings often work together to produce and direct outstanding movies. The Adebayos no doubt are a force to reckon with in the entertainment industry.

FEMI ADEBAYO’s New Movie, King Of Thieves Is The Hottest In NIGERIA was last modified: May 17th, 2022 by Biodun Alao

What I Have Done Differently For Mushin People – Lawmaker, Hon. OLAWALE SOBUR