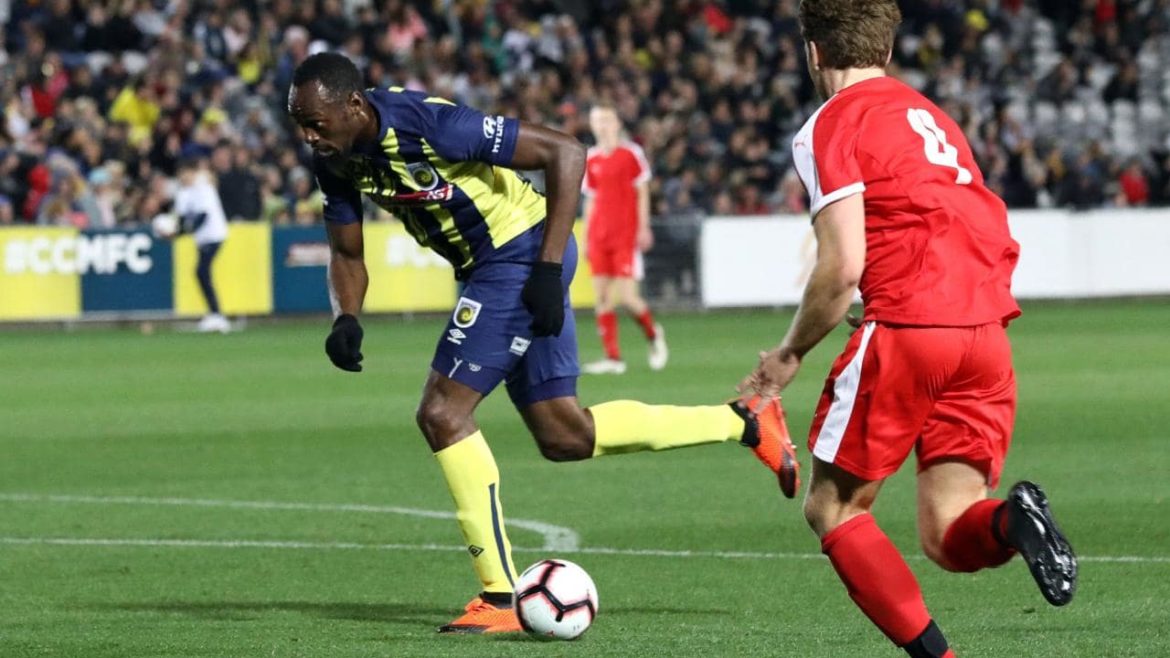 Coast Mariners, fights for the ball with a player from a Central Coast amateur selection team during a pre-season practice football match in Gosford, New South Wales on August 31, 2018. Andrew Murray / AFP

Olympic sprint champion, Usain Bolt, came off the bench to commence his football career with Australia’s Central Coast Mariners in a pre-season friendly at Gosford on Friday.

However, Bolt later conceded that he would need more time to get up to speed.

The 32-year-old Jamaican, who is hoping to win a professional contract ahead of the Mariners’ 2018-19 A-League campaign, was greeted by a crowd of nearly 10,000 as he stepped onto the pitch.

The match played at the team’s base north of Sydney, saw Bolt coming in as a substitute in the 72nd minute against an amateur select side.

With the Mariners already leading 6-0, a relaxed Bolt pulled off a few step-overs on the left wing and was inches away from connecting with a close-range tap-in.

There were a few heavy touches and the occasional loss of possession in the final few minutes, which showed Bolt still has plenty of work to do.

After the Mariners sealed a 6-1 victory, Bolt acknowledged that he would need at least, four months to build up his fitness levels and perform at his peak on the football pitch.

“Probably four or five months… to get fit, two months. Four months from now, I’ll be playing like one of the guys,” he said.

“It was good; it was what I expected. I was a bit nervous, but as soon as I got on the field it went away.

“My fitness is much better. The more I play, listen and train the better I’ll get,” he said.

Bolt’s attempt to transform himself from global athletics superstar to professional football player has generated huge publicity for the struggling Mariners, who finished bottom of the 10-team A-league last season.

READ ALSO: “I’LL BE ONE OF THE GREATEST MANAGERS IN THE WORLD” EVEN WITHOUT TITLES – MOURINHO