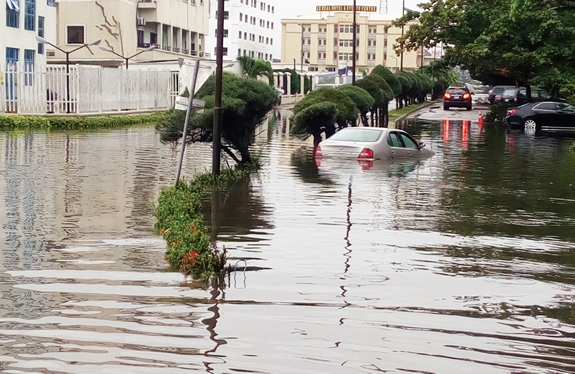 Hundreds of people in areas of Lokoja, the Kogi State capital and other parts of the confluence state, have been forced out of their homes as rising water levels continue to encroach on residences.

The unprecedented rainfall has brought untold hardship as families are driven from their homes.

The situation, it is predicted, could worsen if water from the Lagdo Dam, in Cameron, is released, a scenario in which the people of Kogi pray not to happen.

In Adankolo, residents whose homes have been overtaken by the flood, continue to move out in droves, while others yet to be affected, are not taking chances.

Hundreds of residents of Ganaja village, in Ajaokuta Local Government Area, are also facing a similar situation, having been rendered homeless by the flood.

Aside living houses, shops, and other commercial buildings have been affected by the flood, even as the water level continues to rise.

The state government has however commenced the distribution of foodstuffs and other relief items to the flood victims in IDPs camps across the state.

He noted that the National Emergency Maintenance Agency (NEMA) had also supplied some relief items, including mattresses, blankets, and mats, to be distributed to the flood victims.

In addition, the state government procured food items for the victims to enable them to feed in the camps.

According to the commissioner: “This is just the first batch of the distribution. More are still coming, because His Excellency, Governor Yahaya Bello, has approved the release of fund to get more foodstuffs.”

He appealed to individuals, corporate organisations and professional bodies to come forward and assist the flood victims, saying that government cannot do it alone.