Home News FOR CHANTE CAMPELL, NOW IS THE TIME TO CHASE CLOUT WITH NED NWOKO LOVE AFFAIR THAT ENDED 14 YEARS AGO
News 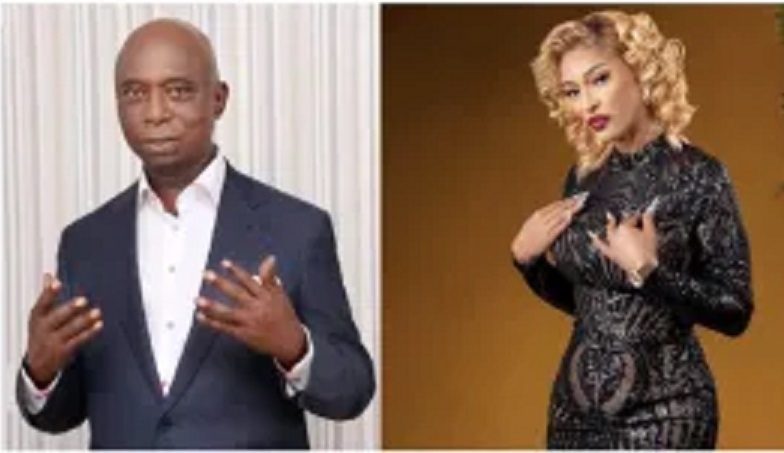 Not a few high society Abuja celebrities, especially those who attend gigs and know who’s dating who were taken aback a few days ago when a report came up about Chante Campbell and her relationship with Billionaire philanthropist and politician, Ned Nwoko. In the report, published by an online outfit, Chante claimed she was the fourth wife of the billionaire and claimed her kids were being maltreated because she had issues with Ned.

Many who knew her in the city’s social circles years back, especially before and after she had her first child for Ned were aware that there was never any marriage anywhere. Chantel was and still a beautiful babe and between her and the politician, there was the chemistry that metamorphosed into producing babies. Even when the relationship went sour and Chante went to the media, back in 2008, Ned kept quiet all through.
It is instructive that both of them went their separate ways emotionally while Ned took up the responsibility for his kids. Nothing was heard from her until recently when she started these tantrums which even friends close to her have warned could cost her dearly. For instance, Ned Nwoko at no time paid any dowry on her neither did the formalities of a wedding whether traditional or, Islamic or church perform.
Yet, sources close to her acknowledged that the kids have not at any point in time lacked anything good, indeed they are said to be in some of the most expensive boarding schools in Abuja. He is also believed to have given them a house in Life Camp, providing every support they need.
A source, close to Chante revealed that the relationship died fourteen years ago and the man has been doing more than enough for the kids but Chante is ‘always high,’ and once in a while she switches off completely from reality and might have in such moments of delusion called himself a wife to a man 14 years after they parted ways and also in a bid to court attention, claim that his kids were being maltreated while the opposite is the case.
What makes the whole story more curious is the fact that this is the first time any of the women who have children for Billionaire Ned Nwoko will come out and accuse him of negligence.
Recall that some of the earliest pictures of his actress wife, Regina Daniels Nwoko that leaked to the media were those of her teaching some of his kids how to swim and sharing intimate experiences together. Even though Ned Nwoko is yet to speak over the recent controversy it is believed that he does not find the issue funny because, according to sources close to him, he tries to keep issues relating to his kids off the social media as much as possible.

FOR CHANTE CAMPELL, NOW IS THE TIME TO CHASE CLOUT WITH NED NWOKO LOVE AFFAIR THAT ENDED 14 YEARS AGO was last modified: September 16th, 2022 by Reporter