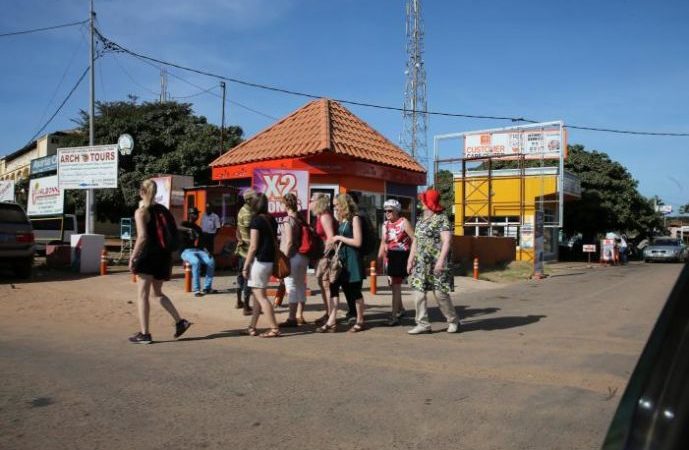 Gambian President Yahya Jammeh looked determined to cling to power on Wednesday as his mandate came to an end, while tourists packed onto planes in an exodus sparked by the country’s state of emergency.

Jammeh said Tuesday the emergency measure was necessary due to the interference of foreign powers in the country’s December 1 election, which the president of 22 years lost to opponent Adama Barrow.

Barrow, who is currently sheltering in neighbouring Senegal, maintains his inauguration will go ahead on Thursday on Gambian soil, putting the country on a collision course.

Jammeh’s declaration immediately triggered travel advisory warnings by Britain and the Netherlands, with around 1,000 British tourists expected to leave on special flights on Wednesday alone.

“It’s because of the uncertainty and the likelihood an ECOWAS standby force will have to be deployed,” a diplomatic source told AFP.

The 15-nation Economic Community Of West African States (ECOWAS) has repeatedly urged Jammeh to respect the outcome of the vote and step aside, a call backed by the UN Security Council, African Union and others.

In Washington, the US State Department urged Jammeh to “peacefully hand over power” to Barrow, but a military option is becoming more likely by the hour.

A source at Nigeria’s military HQ told AFP a deployment to Senegal, whose territory surrounds The Gambia, would happen “very soon”.

Under the Gambian constitution, a state of emergency lasts up to 90 days if the national assembly confirms it — which the legislature did late Tuesday.

Brian and Yvonne Souch, a couple from Witney in southern England, told AFP they were unaware of the potential risk of flying to the country 10 days ago and felt tour company Thomas Cook should have kept them better informed.

“We didn’t know anything until we came down for breakfast,” Brian Souch said, sitting in shorts and sleeveless T-shirt in the lobby of a hotel in the Kololi tourist strip.

A return visitor for the last six years, Souch came back for “the weather, the people, the beaches,” and was disappointed to be put on a hastily scheduled extra flight organised by the package holiday firm.

Thomas Cook said in a statement Wednesday a programme of additional flights into Banjul airport would bring home the 1,000 package holidaymakers it has in The Gambia, followed by up 2,500 more at the “earliest possible flight availability”.

Holidaymakers were told that Thomas Cook flights would stop completely in a few days time, leaving them at risk of being stranded.

Some tourists were unfazed by the news as the state of emergency, however, as their countries have not issued travel alerts.

“We have over two weeks left and we are staying,” said Mariann Lundvall, who flew into Banjul to escape Finland’s freezing winter.

“If the Finnish government decide we go, then we go,” she added, but with a pained face added “the climate in Helsinki… it is so cold now!”

Others expressed concern for The Gambia’s future. Barry Curley, a 70-year-old pensioner, he felt “a bit aggrieved” to return home straight after arriving, but added: “I just hope that things go well for the country because they seem lovely people.”

The panic caused by the state of emergency could prove devastating for the country’s economy, which experts say relies on tourism for up to 20 percent of the economy.

Gambians were taking precautions and stocking up on food and supplies in the few shops that remained open in districts close to the capital, Banjul, with roads quiet and the street hawkers that sell phone credit and tourist accessories on the streets notably absent.

Fatou Sarr, a resident of the fishing community of Old Jeshwang, said: “Only a few shops had bread this morning and they ran out of stock very early. If this stalemate drags on for a week or two, the country will run out.”

Citizens continue to pack their bags and stream out of Gambia — a small, narrow enclave of Senegal except for its coast — by road and ferry heading for Senegal, Guinea-Bissau and Guinea, taking as many possessions as they can carry.

“My two children and I are staying with my aunt. We don’t know what will happen tomorrow,” said a 50-year-old woman who recently took shelter in Senegal, adding that she hoped to return home soon.

Gambia’s Jammeh clings on as tourists flee was last modified: January 18th, 2017 by Arinze Ago