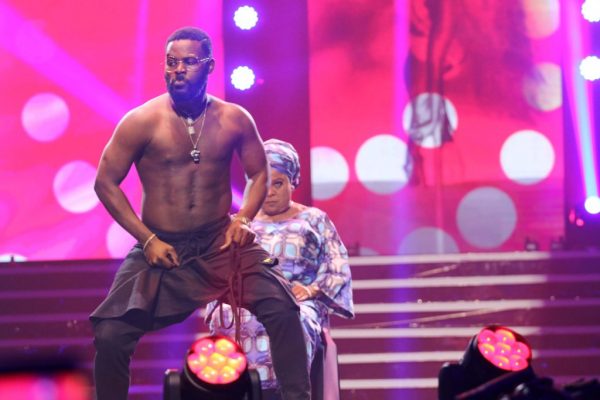 It was a night filled with a lot of fun and no dull moment. Falz had his second Experience concert in Eko hotel and suites, the event was put together by live sports media. 8 of June is a day that will never be forgotten by Falz because the way he wishes to see his event was the way it turned out from the support from all the sponsors like Mtn, Trophy, Hennessy, Gtbank, RedTv, and Topmint.

One of the first events that kept to time, the red carpet started at 6pm and the main event started at 8pm. At 8pm the hall was already filled with other fans outside trying to get their tickets to get into the hall. So many celebrities and politicians came out to support Falz.

Let’s say the event was basically for all the Artiste that Falz had on his song or featured him because 70% of the artiste that performed Falz had a song with them, they performed together and thrilled their fans giving them 100% entertainment, Falz experience 2 was a very anticipated event because he killed the 1st experience his fans wanted to know if he could do more than what he did last year but Falz didn’t give them the wrong impression he put all his best from the artist lineup and the timing.

No one could actually say what Falz had in store for his fans because the artiste we never expected was coming on stage to surprise their fans. 3 beautiful girls from the sweet girls association gave the Falz experience another face as their event was the best performance and guest were all thrilled that ladies could have so much energy on stage. If you missed this event not to worry because we at city people magazine also get to bring you exclusive gist from the event. Read for experts.

Demmivee who is one of the flyboys INC big boys came out to support Falz the bad guy. It was a night filled with lots of fun. When Demmie was called to stage to perform all his fans in the house screamed out loud, let’s say Demmie is one of the ladies’ man because of his voice. He uses his amazing voice and classic lyric to melt his female fans. Before his performance we had met Demmie at the backstage talking to him, it was confirmed that he had a little issue with his voice but Demmie didn’t let that hold him down he still did what he knew how to best and his performance was one of the best as he performed Hypocrite with Falz the bad guy.

Simi stormed event with her squad looking pretty with her yellow Jumpsuit. Simi’s performance was the one that thrilled fans from when she came on stage with Falz to perform Mind your business a song Simi featured him on and other songs they had together. The guest was thrilled by all the drama the put on stage by these two as they are really good together with music. She gave her fans some songs from her album that fans were really crazy about.

One of the sweet girl association babes came on stage to thrill the guest at the event wearing a Black beautifully made dress, when she came on stage her fans were all happy to see her with so much energy on stage. She performed her hit tracks like Tonight and Yolo. As she performance Yolo she came down from stage all her fans were screaming so loud because the could get to make a close video of her as she dances with her fans, Yolo had a particular dance step 2 of her fans danced with her before she went on stage and told her fans she loved them and signed out.

Niniola thrilled her fans with an amazing performance

Only hearing Niniola’s song the quest were all screaming then 4 dancers came on stage before Niniola came on stage in grand style as to tell the reason why they are really called sweet girls association. She strted with performing Bana as she came close so that her fans could make close videos of her as all the camera lights were on, she danced so well as she is a good dancer, not forgetting her costume she wore a black short dress with a waist bag and made a green hair.

Nini twerked on stage and this made her fans scream as her energy is always on point. Her performance was one of the best performance,. She called one of her female fans to come on stage and dance with her, the fan danced so well that Nini hugged her and she won a bag home with so much excitement. Talking of when she performed Maradona her biggest song the fans were almost screaming out their lungs she danced to this song and showing all the attitude the song had and left the stage telling all her fans she loves them.

Skibbi who is one of the hottest things in town right now came on stage to perform Sensima and then performed How stars do a song he had with Falz. It was a really nice performance from the handsome guy all his fans were happy to see him with his wonderful energy wondering where the energy comes from. Especially when he performed how stars do the way he did how stars do step made his fans put on their cameras and scream so loud.

Amazing performance from the Ace rapper Ice Prince Zamani. Do you now understand when we said earlier that we didn’t know what exactly Falz had in store no one expected Ice prince on that stage but Falz surprised everyone as he comes on stage all his fans were happy he performances few of his songs then Falz jumps on stage to join him thrill fans together as they made a wonderful one on stage.

dice just had a song with Falz and the song is already gaining massive airplay everywhere. Dice came on stage with the light mask as some people were wondering who he was as they have not known he recently dropped a song with Falz. The thrill fans together with this song as Dice has so much energy on stage he made sure he gave his best to his fans. The female fans especially love him so much as they screamed when he came close to them to have a closer view of him and make snap videos it was a really wonderful performance from him.

Falz thrills his fans with his wonderful performance

Falz who is not just an artist but an entertainer really entertained his fans at his experience 2, Falz only doesn’t kill people shows he kills his own show too. It was an amazing night to turn out for this man because he made the time worth it.

Over14 dancers were on stage to thrill fans with their dance steps as Falz performances, Falz didn’t just sing along to his fans but also entertained them as he asked the say after him when he says Falz they respond with Bad guy and they all screamed out loud and didn’t wait for him to land with Falz. He gives shout out to all the media house and all his sponsors and also thanks Live sport for single handily putting an experience together and making it worth the trust. He also gave shout out to his Grandma and his parent for coming out to support him.

He then performance Way and all his fans go craze as the love the song so much he attempts to come down from the stage and his fans struggle him and he runs back up, he performance Bad guy and the fans wanted to lose it all as this is one of the best from falz. He pulls his jacket and throws it into the crowd and a girl from the crowd was lucky to get it, some guys jump from nowhere to collect it from her and everyone around there put those guys in their places as it was not right that they wanted to collect the jacket from her.

As it was getting to the end of the event balloons came from nowhere as Falz was performing and his fans were dancing and playing with them and Falz said he was going to see his fans again next year and thanked them for coming out to support him and said he loved them from the bottom of his heart.

After Falz had stepped out he continued from there as he asked the Dj to give him all the latest jams and he called fans to come on stage if they know how to do all the trending dance steps as the came and enjoyed their selves as he was hyping all of them. For over an hour he did this and was also dancing, some fans stayed back and washed the rest dancing on stage as they were all smiling and having fun.