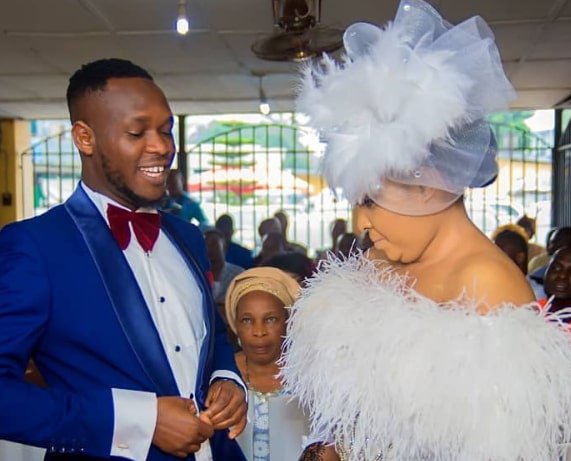 All roads led to Time Square Event Centre in Ikeja on Saturday 6th October 2018, where 2 big movie stars Okiki Afolayan (a movie director) and Bimbo Ogunowo tied the knot. This wedding has been adjudged the best Nollywood has witnessed this year, as all the big names and notable stars were present at the wedding to celebrate the couple.

Over one thousand Nollywood stars grace the occasion, while some even flew in from abroad just to grace the occasion. Boye Best was at the Bandstand, thrilling the guests with nice tunes, while Funsho Adeolu and Ijebu were the Master of Ceremony.

THE BRIDE AND GROOM CHANGED INTO FOUR DIFFERENT OUTFITS

It’s no news, that Bimbo is very stylish, and classy. This was so evident in the four different attires the bride and the groom wore, during the wedding ceremony. They started off with the normal while bridal attire and Okiki wore a Muslim outfit to compliment the wife. They both looked so gorgeous in the outfit they choose for the Nikkah ceremony in the morning.

Afterwards, they changed into three other attires, and Bimbo finally wore a beautiful gold gown, which really brought out her beauty, while Okiki, wore, black and brown suit, and they sure looked good together.

BOYE BEST ON THE BANDSTAND

Popular musician Boye Best, was on the bandstand, he rendered beautiful songs to the listening pleasure of the guests.

And this got lots of celebrities who graced the occasion on the feet throughout the ceremony. Popular Yoruba actor Odunlade Adekola was one of the few celebrities that opened the dance floor, even before the couple had their first official dance.

The popular musician sang the praises of the Nollywood stars, and they sprayed him endlessly, they all had the fun of their lives.

EIGHT DIFFERENT ASO-EBIS WERE ON DISPLAY

Oba 2018 is unarguably the best Nollywood wedding of the year. It was a wedding filled with glitz and glamour. A total number of 8 Aso-Ebi were on display for the wedding. Both the bride and the groom’s family settled for a blue lace. Nollywood stars went for a beautiful pink lace, the bride’s close friends went for another shade of very beautiful pink aso-ebi, popularly Nollywood actress Opeyemi Aiyeola who is located in the United Kingdom also choose another beautiful lace for herself and her friends.

The groom’s friends also were dressed in blue Atiku native, and a darker blue jacket to compliment it. Then Yoruba movie directors also wore a special outfit.

They were only three that made it to the event and they were dressed in blue designed Atiku, and a darker Blue Agbada filled with embroideries, which really made them stand out of the crowd. Finally, every other guest, who didn’t belong to any of these mentioned groups wore white native and a pink cap or gele to match. All these beautiful aso-ebi made the wedding very colourful.

FATHIA WILLIAMS AS SPECIAL HOST FOR THE STARS

Fathia Williams is one of the leading ladies in the entertainment industry. She goes extra miles to make sure any event is a huge success, especially, when she shares a very close relationship with the celebrant. This she displayed during the Oba 2018. She happens to be one of the organizers of the wedding. She also made sure, all the celebrities that graced the occasion were properly taken care off with sufficient food and drinks. She equally set out special tables for Nollywood stars, with their names on each table. So they were all seated in this same area where she can take good and proper care of them.

She was referred to as one of the bride’s mother at the Oba 2018, and this she proved, as she was on her feet all through the wedding ceremony, making sure everything went well and Nollywood stars were properly taken care. She was not in it alone,

Sikiratu Sindodo was beside her throughout, rendering a helping hand to her, from the beginning of the wedding. They both wore, a beautiful white lace, but when the wedding started proper, they both changed to the pink lace that was chosen for the Nollywood stars.

This beautiful script interpreter flew in from abroad, just to be part of the wedding. She didn’t stop at that, she picked her own beautiful aso ebi, which she and her friends wore for the wedding. She barely sat down at the wedding as well, she was seen moving around, attending to guests, and also took time to check on the bride and groom if they needed anything, especially to eat and drink.

Nollywood actress, producer, and musician Dayo Amusa was one of the artistes that performed at the wedding, she rendered two of her popular tracks and most of the actresses present especially Fathia Balogun, were on their feet, singing and dancing along with her.

The “Shomo Age Mi” Crooner Abimbola Kazzim, also performed his popular track,  “Shomo Age Mi”, all the guests liked his performance, as most of them were seen on their feet dancing and singing, just to encourage and appreciate him.

THE CAKE THAT GOT PEOPLE TALKING

The cake of the wedding got lots of people talking. The cake was built in form of a very big mansion and a beautiful crown at the top. The cake was baked by The Cakes Master himself Mr Oluwaseun, he has been into the business which he inherited from his mum 40yrs ago. According to him, it took him 2 months to work on that particular concept, and it took him, a whole week, to bake the cake for Oba 2018. He wanted something different unique and creative, and he achieved his aims. According to the very hardworking young man, the cake had white and pink as its colour, and a crown at the top because of the “Oba2018” which cost a whooping sum of 1million plus.

The way the bride and groom were ushered in, for the reception was out of this world. All the big names in the entertainment industry ushered in the couple from Odunlade Adekola to Femi Adebayo. Just name it. It was indeed beautiful to watch the entry of the couple of the reception, which took over an hour, as celebrities, displayed all manner of dance steps. They all dropped their stardom in one corner, to give two of their own, the best wedding, anybody can dream of having.

FUNSHO ADEOLU AND IJEBU AS MC’S

Veteran actor Funsho Adeolu and comic actor Ijebu anchored the event. They both cracked lots of jokes and kept the guests laughing all through the wedding ceremony.

In their own ways, they added lots of fun to the ceremony, and there was no single dull moment with both of them as MC’s.

THE DRAMATIC FEEDING OF CAKE BY THE COUPLE

With Ijebu as an MC of an event, one should expect the unexpected. The feeding of cake by the couple was one of the highlights of the ceremony. The MC Ijebu made both of them dance like Indians and display love like Indians before they can feed each other the cake. Being filmmakers, they both carried out their assignment so perfectly, and people could not help but applaud them for their performance.