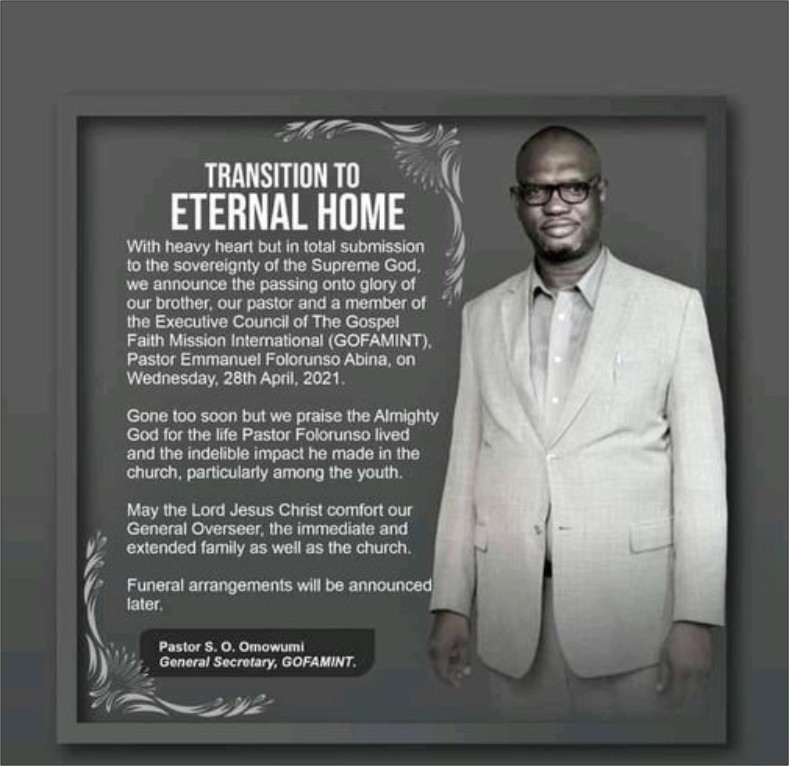 The Nigerian Pentecostal Family has just been hit hard within a week as Pastor E.O. Abina of The Gospel Faith Mission International (Gofamint), lost his first son, Emmanuel F. Abina, the Pastor of the church in Abuja. Pastor Emmanuel passed on in the early hours of Wednesday, 28 April, 2021

On the commissioning day, the G.O said, “I feel fulfilled today as Emmanuel finally bows to the Pulpit, he becomes pioneer pastor of GOFAMINT KINGDOM HOUSE”.

Under an environment described by a wordsmith, Pastor Dr Idowu Jinadu as atmosphere saturated with Wi-Fi anointing, Emmanuel Folorunsho Oluwagbemiro Abina was installed the pioneer Pastor of GOFAMINT KINGDOM HOUSE, Festac by Apple Junction, Lagos on Sunday, 4th of September, 2016. It was a great moment for Pastor Dr Abina seeing his first son take up pastoral work after several years of manifesting grace for ministry at different fora, both at home and international forum.

Elijah Oludele Abina is the General Overseer of The Gospel Faith Mission International (GOFAMINT) and one of the founding fathers of the Pentecostal Fellowship of Nigeria. It was founded by Reuben Akinwalere George in Iwaya Yaba in 1956

Pastor Abina became a full-time minister with the Gospel Faith Mission International in October 1962, resigning from his secular job at Arbico Limited, Apapa, Lagos after a clear conviction from the Spirit of God. He was first, the Pastor-in-Charge of the GOFAMINT Iwaya Church in 1963, then pastor-in-charge of the GOFAMINT Mushin church in 1966 and later promoted to become the District Overseer. Pastor Reuben George, the then General Overseer later appointed him his deputy, a position he faithfully served in until Pastor George passed on to glory in 1987.

After Pastor George passed on, Pastor Abina, who was the Deputy General Overseer assumed the leadership of the church after a unanimous agreement by the members of the Church’s Executive Council. He was installed on January 8, 1988, at the GOFAMINT International Gospel Centre, Ojoo, Ibadan, Oyo State.