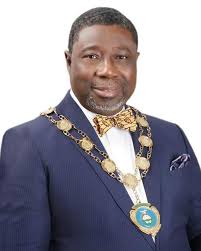 Engr. Adekunle Mokuolu’s career as a practising engineer is an interesting one, he is a life member of Nigerian Society of Engineers with COREN number R.022732. He is also a member of American Society of Civil Engineers. He is a World Bank certified Public, Private Partnership professional. Since1985 when the Abuja branch of Engr. Adekunle Mokuolu is the 31st President of the Nigerian Society of Engineers (NSE). His investiture as NSE’s president,early this year in Abuja, was an elaborate event, with the movers and shakers in the country in attendance; the likes of the former President Chief Olusegun Obasanjo, Senator Iyiola Omisore and many others were present. Though Mokuolu had officially took over from the immediate past President of the society, Engr. Otis Anyaeji, on Saturday 30th, December, 2017. But the ceremonial phase of transition of power held on 13th January, 2018. Mokuolu’s emergence as NSE’s President however is not surprising, having served in various capacities in the revered ociety before now. In case you don’t know the person we are talking about here, Mokuolu was born in Lagos to the family of Mr. John Adedapo and Mrs. Christiana Mokuolu (both of the blessed memory) in 1954. He grew up in Ibadan alongside his brother, Adewale, with their patternal grandmother, Madam Osuntolu Mokuolu, in whose care they were left, for both parents to further their studies in U.K. Here, the young Mokuolu was pampered and really enjoyed the affection of a grandmother. In 1966, he obtained his first Living School Certificate with distintion, at Ibadan City Council Primary School, where he met a teacher called Mrs. Florence Desalu. She was an Arithmetic teacher and it was on her teaching skill that Mokuolu peaked interest in Arithmetic and later other Science subjects. Mrs. Desalu was said to have inspired Adekunle Mokuolu in no small measure, in the direction of paying attention to his studies.. his father on the other hand, being a disciplined man, paid attention to his education and enrolled him at Baptist Boys High Abeokuta, upon their return from U.K. Hoping for a brighter future for Adekunle Mokuolu to become a chattered accountant and succeed him by taking over management of the family farm, Mokuolu, Robinson and Co, Auditors and Chattered Accountant. Engr. Mokuolu later left for Eko Boys High School, to complete his secondary school education. Where he bagged the general certification in division 2 in 1972. He secured admission at the Federal School of Arts and Science, Lagos, where from he successful passed his high school certificate,HSC in 1976. He proceeded to University of Lagos, in Faculty of Engineering. Under the tutelage of Engr. Babatunde Lapinte, FNSE, Engr. Adekunle Mokuolu had a rear opportunity of travelling to Leeds in the United Kingdom to complet his six months sewels scheme, which started earlier in Enugu. He returned to Nigeria and completed his prgram at UNILAG, where bagged the Science of Bachelors Degree in Civil Engineering in 1980. He did his mandatory NYSC in Cros River in 1991 and his place of assignment was at Ogoja Water Works. Where he was mentored by an experienced top official, Mr. Fidelis Mustapha, who made his stint at Water Works indeed a memorable one. Mokuolu however ceased opportunity of his Youth Corp service experience and to ganner a lot of skills from the artisans, the technologists and technicians that were attached to the plant. The experiences later came to bear in his career. After NYSC, Engr. Mokuolu took his destiny into his hands and left for Abuja,in order to avoid his father pressure to reconsider Accounting and Auditing to take over management of the family farm. Incidentally, this was at a time when the government wanted to build the Federal Capital Territory, Abuja. There he was able to secure appointment with the Federal Capital Territory Development. In 1988, he was Posted to supervise development of projects, which provided him the opportunity to put to practice what he learnt in the U.K. His service at FCTDA between 1981-2009 was characterised with lots of projects; supervision of engineering construction in the North-West District, Wuse1 executed by Julius Begger and many other projects like that. He later became the Desk Officer for PTF projects between 1995-96. He also served under the then FCT Minister, Mallam Nasil El-Rufai now Governor of Kaduna State. Before he voluntarily retired from the service of FCTDA as Deputy Director, making him the first engineer to have taken such decision in the history of FCTDA.

NSE were registered, he has served in many executive positions. He was a member of the Executive Council between 1990, 2001, 2007 and2010. He was Chairman, Editorial Board, Auditor of Nigerian Society of Engineers. He has to his credit, a record of being elected the Vice President of NSE for five consecutive times 2008, 2009, 2010, 2013 and 2014. Before he was elected the Deputy President of NSE and now President. He won the Presidential Merit Award in 1992 and 1993 as well as many other awards and honours which are too numerous to be mentioned. Engr. Mokuolu is happily married to Deaconess Oluwayemisi Mokuolu, a Nurse and an Educations and their marriage is blessed with lovely children. All these and many more are the reasons make Engr. Olumuyiwa Adekunle Mokuolu a thoroughbred business-minded technocrat with a good tack record. City People’s Correspondent, Dare Adeniran, recently met with Engineer Mokuolu in Ibadan, at the investiture program of the new Chairman of the Premier Branch of the society. Where he speaks on his plans and vision for NSE, as well as life as President of the prestigious association. Though the interview was very brief but it speaks volume on efforts of the new Exco  under leadership of Engr. Mokuolu, in making sure that engineers are well taken care of and the same time be involved in physical development of the country. Enjoy the excerpts.

Let me start by saying congratulations on your emergence as President, Nigerian Society of Engineers and it is on that note I will like know how has the experience been for you so far?

It is been nice, because there is nothing that I am surprise about. I was once Deputy President and by article and memorandum of the association, we elect our president two years before they take over power.

Are there challenges, facing the association, you have noticed before your emergence? What these challenges and how do you plan to tackle them?

Challenges of the Nigerian Society of Engineers has to do with the fact that in our country, we do not involve the NSE and the Nigerian Engineers as the drivers of the physical development of our country. In Nigeria today, we would rather involve foreigners as major stakeholders in physical development than getting our own citizens to be the main drivers, the professionals who are engineers to be the professionals in development of our country. So, we would rather give opportunities for learning for foreigners in our country than to give opportunity for learning for the Nigeria citizens. And so, we want to own our profession, we want to own engineering in this country. We want to own the physical development of this country and so, we want to also enjoy it. These are the things that we are trying to do, these are the challenges. But there is a ray of hope because the President and the Commander-in-Chief of the Armed Forces, Federal Republic of Nigeria, Muhammadu Buhari has now issued Presidential Executive Order, which makes it compulsory for all the Ministries, Department and Agencies to ensure that they use Nigerians for contracts, services, in the delivery of Science, Technology and Engineering, procurement in this country. And most importantly that the Nigerian engineers are the ones that will be leading any contract. A Nigerian firm, made up of only Nigerian engineers will be the ones to lead any engineering consultancy in this country. Which we are so happy about and we hope the states will do the same.

What is your vision for NSE?

My vision is that NSE will start what we call Community Engineering, we would be able to get so many people to be involved in what we are doing. And then be involved in the rural development of this country, such that Nigerians can enjoy the goodies of life. Because Nigeria is a beautiful land and it is a good land. But we need to work it before we can enjoy it.

There seems to be high record of buildings collapse recently. How do plan to tackle menace of  quacks in the engineering profession?

Why Many Celebrities Troop To Our Church For Prayers

How I Started My Fashion Business 18 Yrs Ago – IBADAN Based Designer, BASHY KUTI