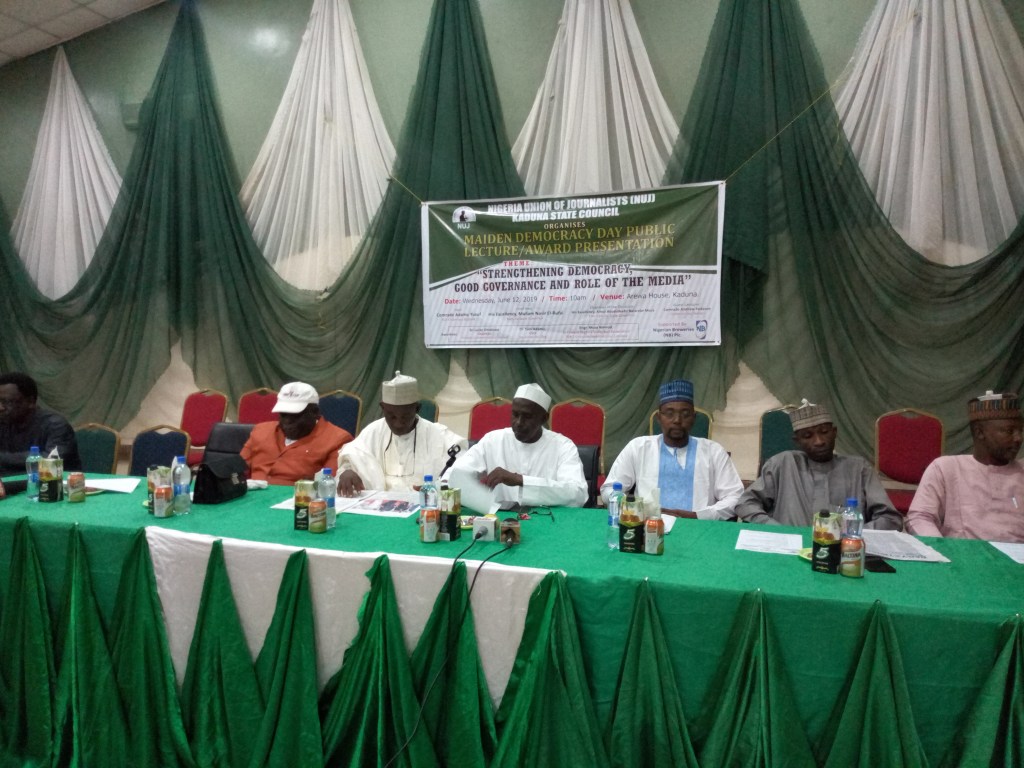 As part of activities to mark the Democracy Day, Kaduna State Council of Nigeria Union of Journalists (NUJ) has honoured three eminent Nigerians for their contributions to sustaining democracy and good governance

The ceremony held at Arewa House ,Kaduna was attended by labour Union, security agencies, politicians and other dignitaries and members of NUJ .

The awardees were : Chairman/CEO Pinnacles Communications, Sir Lucky Omoluwa, CEO of Enviplan Interntional, Engineer Musa Nimrod and Founder Deservation.org, Dr. Sani Adamu who were honoured for their contributions to democracy and good governance.
Sir Lucky Omoluwa was awarded Icon of Broadcast Media Development in Nigeria, prominently for his role in connecting millions of grassroots viewers to digital satellite television among other feats.
Engineer Musa Nimrod, bagged the Icon Of Youth Empowerment Award for his tremendous contributions to uplifting the standards of youths economically and through sports in the country.
Dr. Sani Adamu, was awarded in recognition of his contributions to democracy through effective mobilisation of youth to actively participate in politics. He was presented with the Young Democratic Icon Award.
In his remarks, NUJ Kaduna Chairman, Comrade Adamu Yusuf congratulated the recipients for being the nominees for the maiden edition of the awards.
In an interview after the presentation, Engineer Nimrod said he was grateful to NUJ for identifying him for the prestigious award.
“I am happy that the little we do for society is been recognised. The fact remains that if we don’t impact positively on the youth, when we are old and rely on walking stick to walk, who would help us? It us still the same youth of today that we have empowered.
Sir Omoluwa, who was unavoidably absent, was represented by his Media Consultant, Alhaji Abdulhameed Babatunde

Many Of The Bridges AMOSUN Built Are Unnecessary – OGD