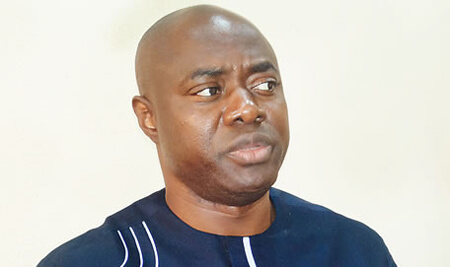 When the story broke a few weeks ago that the alliance between the new Governor of Oyo State, Engr. Seyi, Makinde-led PDP and a coalition led by ex-Gov Rashidi Ladoja of Zenith Labour Party (ZLP), which also includes Barr Bolaji Ayorinde’s Social Democratic Party (SDP) and Senator Femi Lanlehin-led African Democratic Congress (ADC) may have hit the rocks, many regarded the unpleasant news as a bad rumour.

Now, there is a crack in the alliance. There is a disagreement between the Coalition and the PDP.

Recall that the parties in the coalition came together to form a stronger force, which enabled them wrestle power from the immediate past governor of the state, Senator Abiola Ajimobi and his APC party, after 8 years in office. At the end of the gubernatorial election, Engr. Seyi Makinde, the PDP candidate at the poll scored a total of 515,621 votes, to defeat his rival, Chief Bayo Adelabu of APC, who polled 357,982 votes.

It was also a public knowledge that the coalition was based on mutual agreement, on what percentage of appointments would be allocated to each participating party in alliance with PDP. In the arrangement, 30 percent was said to have been given to ADC, as a strong party next to PDP, while 10 percent went to ZLP.

As things now stand,  Senator Rashidi Ladoja was not happy about the turn of events. The very first sign that all may not be well  within the coalition was Ladoja’s absence at Gov Seyi Makinde’s inauguration on May 29. Though, the Osi Olubadan of Ibadan land gave reasons for his absence at the swearing in programme many didn’t believe the reason. He was said to be mourning his 31-year old, Debola Ladoja, who died on May 29, 2015.  Those who understand  the dynamics of politics  insisted that there was more to it than meet the eye.

The reason for the  grievance of the Ladoja group, it was learnt, was the change in the agreement sharing formula. The groups earlier agreed on 10 percent share, for the Ladoja group which was later slashed to 5. A source said the  decision was taken by the PDP  as a result of Ladoja group’s tough demand.  The group was said to be eyeing key positions like  SSG despite being given 10 percent. This, the source revealed, was what got the PDP camp infruriated at a strategic meeting, which led  them to go back on the original agreement, before the personal intervention of Gov Seyi Makinde, who solicited  another 5 percent on behalf of Ladoja group back then. While the other groups in the coalition kept mum, some political watchers said there is a strong opinion that the Ladoja group may resort to attacks on the PDP,  to have its way before other key positions would be announced by the governor. Political watchers have explained that what is currently going on is to be expected, because conflict is usually one of the tools  political gladiators use in getting the necessary attention in the formation of any cabinet, hence the disagreement is important for the promoter of the conflict.  Once a position is given out it would not be easy to  reverse it, hence the need to fight it out before the deed is done.

The question observers are now asking is: Will this kind of logic work with Gov Seyi Makinde? The governor seems to be a man of his own. He doesn’t appear to be  easily swayed or intimidated. He is not a pushover either. Nobody seems to know the next joker up his sleeves.

Even Chief Rashidi Ladoja, a few days to the election, on a live radio programme, alongside other candidates who stepped down for Makinde, confirmed that the Governor may not be as gentle as he looks. When asked whether Engr Makinde is someone he would be able to advise whenever the need arises, Chief Ladoja said, “though, the Governor could be stubborn, but he is someone he could talk to or advise when necessary”.

The council, which will be inaugurated soon, according to the Oyo State Government, is “to advise the  Governor and his cabinet from time to time on the implementation of developmental programmes and policies of the administration.” The decision to have this council is also aimed at ensuring that the government taps from the wealth of experience of elders and opinion moulders in the state. For the governor to be able to run an all-inclusive government for a greater Oyo State.

Though, no official statement has been made by any of those named as members of the council, since it has not been fully inaugurated, but the development may be shocking to some of them who would have expected to be given more important roles to play in the new  government.

This development is also believed in some quarters to be an indication of more crises to hit the alliance, if not well managed.

But whether all the parties involved would able to sink their differences amicably or allow them to escalate to a bigger problem, time will definitely tell.

Meanwhile, the outcome of all the issues that raised the crises will also play a major role in what happens come 2023, when the present government in power may be seeking re-election.

READ ALSO: MANY OF THE BRIDGES AMOSUN BUILT ARE UNNECESSARY – OGD