Gov. AKEREDOLU In Big Battle With His Deputy Over 2020 ONDO Governorship Race 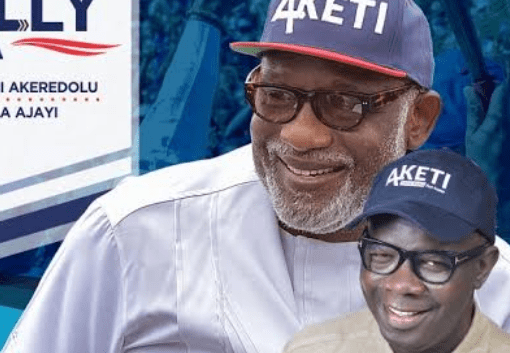 Right now, there’s a cold war between the Governor of Ondo State, Arakunrin Oluwarotimi Akeredolu (SAN) and his Deputy Agboola Ajayi, who many believe has a political ambition. For over 3 months now, there has been news coming from some political quarters in the state that the deputy governor, Agboola Ajayi, is interested in the number one seat and he is ready to pursue it and make the dream a reality. This fight has been going on underground and according to information, moves had been made on many occasions to stop the deputy from pursuing his ambition to become Governor. Though, there has not been any proof that he is eyeing his boss seat, many believe Agboola is ambitious.

It will be recalled that last year, one of the Deputy Governor’s close aides was sacked because the aide referred to the wife of the Deputy Governor as acting First Lady  on social media during her birthday, last year. Again, the recent hijack of his political chairmanship slot in his Local Government by the governor was said to be the beginning of the real game that no one knows where it will end. As it is, Arakunrin Akeredolu is more concerned about his deputy’s intrigues than other political battles ahead of his second term ambition in office.  Interestingly, either the Deputy Governor or his Media aides are yet to respond to the allegations levelled against him.

Just last week the state government, through the Commissioner for Information reacted to the allegation levelled against them by the Hon member representing Ese-Odo State Constituency under the platform of APC, Hon Success. The honourable  accused the Akeredolu-led government of sidelining the minority Ijaw in the state in some key appointments and employment opportunities. The Information Commissioner, Donald Ojogo who is also from the area, asked the people of Ijaw to blame the State Deputy Governor, Hon Agboola Ajayi for any perceived marginalisation. Efforts to reach the Deputy Governor on the allegation proved abortive. He could only reply that “I will speak at the appropriate time” His aides have spoken on the issue.

The Deputy Governor, His Excellency Agboola Ajayi is known to be a grassroot politician that knows the nooks and crannies of the political environment in Ondo State, having been in politics for over 3 decades now. He played a prominent role in the 2016 governorship election in the state and even up till date his political influence can not be ruled out. Many believe “Agbo” as fondly called, is a politician with strong horns and tactics, equipped with political think tanks and gimmicks can never be underestimated. So in the public glare, particularly political followers and stakeholders are keen and watching as events unfold. But the question on the lips of many political observers is: Is the Deputy Governor really nursing the ambition to contest for the Ondo 2020 governorship race? and under which platform. Is it APC or his former party PDP because of the silence on his camp? though the Deputy Governor has been telling those who care to hear that he has no ambition and neither is he contesting any election against his boss. But his silence on most allegations levelled against him makes his supporters think other wise. It’s the constitional right of the Governor to seek reelection after the tenure of his first term in office.

Though, rumors have been flying around that with the look of things and the way things are going between the governor and his Deputy, Akeredolu is likely to impeach him. But the Hon. member representing Owo State Constituency 2 has debunked the rumor that nothing of such is going on at the assembly. He said “as at today, I’m not aware of any impeachment plot against the Deputy Governor. I have not been briefed about that.” (impeachment plot).

Lets tell you more about Agboola Ajayi who started his political career in the late 80’s when he became the Chairman of the Social Democratic Party (SPD) in the Old Apoi ward-1 between 1989 and 1992. He steered the wheel of the party so perfectly and transparently that he gained the trust of his people and this caught the attention of his people so much to the extent that he was the unanimous choice of eminent leaders when the Peoples Democratic Party (PDP) was formed in 1998 and he was made the Secretary of PDP Ilaje/ Ese-Odo Local Government between 1998 and 1999. His performances and attitude was one of the traits the leaders in his community saw in him, if he had greater opportunities, he would give them good representation and would not forget his root and this lead to various political position that he held on to. He was appointed as Supervisor for Agriculture for Ese-Odo Local Government between 1999 and 2001 and in recognition of his excellent performance between 1999 and 2001, he was appointed again as Supervisor for Works for Ese-Odo Local Government between 2001 and 2003. Furtherance to his meritorious service in previous offices, he was appointed Caretaker Chairman of Ese-Odo Local Government between 2003 and 2004. And in 2004, he won the election as the democratically elected Chairman of Ese-Odo Local Government his victory was seen as the reward of his selfless and humanitarian services to his people. He served selflessly and meritoriously as the Chairman of Ese-Odo Local Government between 2004 and 2007 and the Treasurer of Association of Local Government of Nigeria (ALGON), Ondo State chapter between 2004 and 2007. Having served as Chairman for 3 years, his political climax changed in 2007 when he was elected Member Federal House of Representative to represent Ilaje/Ese-Odo Federal Constituency. He saw is emergence as the House of reps lawmaker as a landmark opportunity for him to serve his people better and develop their land. At the National Assembly, he served as the Chairman of House Committee on NDDC between 2007 and 2010. He was also a member of the various committees, which included House Committee on Gas, House committee on Habitat, House committee on Justice and House Committee on Industry between 2007 and 2010. He also contested for the Ondo South Senatorial seat twice under PDP. As the politics of the state is as at now, he has become a household name in the state and Ondo South Senatorial district of Ondo State. And he had since remained a major determinant of socio-political issues in the Southern senatorial district of Ondo State, through the Social Democratic Party, People’s Democratic Party and now All Progressive Congress.

One thing about the deputy governor is that he has remained a loyal party person and he has always pitched his tent with progressive and ideology of the people. This grass-root politician is passionate to serve his people and one thing you can’t take away from him is the fact that he has been a loyal party person and stakeholder of PDP for more than 10 years, before he joined APC in 2015 where he emerged the Deputy Governor of Ondo State to Arakunrin Rotimi Akeredolu, fondly address as Aketi as the 6th Executive Governor of Ondo State. Another thing is that, the Deputy Governor is a silent achiever and a great political communication.

READ ALSO: I SEE COVID-19 AS A BLESSING IN DISGUISE – HIS EMINENCE, CARDINAL OLUBUNMI OKOGIE

Gov. AKEREDOLU In Big Battle With His Deputy Over 2020 ONDO Governorship Race was last modified: April 27th, 2020 by Adeola Shittu

I See COVID-19 As A Blessing In Disguise – His Eminence, Cardinal OLUBUNMI OKOGIE