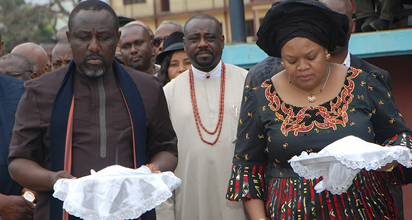 Reactions have continued to trail the disclosure that the Imo state governor’s wife, Mrs. Nkechi Okorocha, is overseeing four government ministries in the state.

Some civil servants at the state secretariat complex, Owerri, who spoke yesterday on strict grounds of anonymity, were unanimous that “nothing could be worse than this”. They also told Vanguard that, “ This may account for why the civil service system in the state is bastardized and comatose.”

The workers equally said that, the disclosure was a joke taken too far. Similarly, an All Progressives Congress, APC, chieftain from Orlu senatorial zone that did not want his name in print, appealed to public functionaries to guard their utterances because of the far reaching consequences of their outbursts. “Such unguarded utterances are the delight of newsmen.

Nobody should blame them if they latch on what will sell their paper,” the APC loyalists said. For Mazi Chijindu S. Ebuka, “People have said so much about the story in the social media and my view on it now will not make any difference from the general view “. He however added that, “I have no doubt that so many unprintable things have been happening in public offices and this may one of the many of the infractions”.

A business man in Owerri, who simply identified himself as Sir, Micheal, said that “ The need of the common man is not who controls the ministries but the basic needs of life like food, water and accommodation. “Please direct your enquiry else where. I am very sick and tired of the happenings in Nigeria.

This is not what we bargained for when we voted for APC in the last general elections”, Sir Micheal said. Meantime, aggrieved senior citizens of Imo State, under the aegis of Nigeria Union of Pensioners, NUP, are billed to storm the streets of Owerri, to protest government’s plan to pay only 40 percent of their entitlements, as the Owerri Branch of Nigerian Bar Association, NBA, has described the forceful payment of only 40 percent of retirees pension as “an act of wickedness, callousness and gross insensitivity on the part of the state government, to the plight of pensioners.

“It has come to the notice of the NBA that government has caused forms to circulate and these pensioners are being asked to sign these forms and upon doing that, they forfeit 60 percent of their entitlements. We view this as wicked, callous and insensitive”, the Owerri NBA Chairman, Mr. Lawrence Nwakaeti said.

While urging Imolites to reject the plan, Nwakaeti also said: “The Bar condemns this. The Bar stands on the side of the pensioners, who are our fathers, mothers, uncles and aunts. The Bar is also calling on Imo State government to immediately withdraw that form in circulation”. The lawyers also flayed what they described as “wanton disregard to the independence of the judicial arm of government in the state”

That moment when you meet your dream celebrity [WATCH]