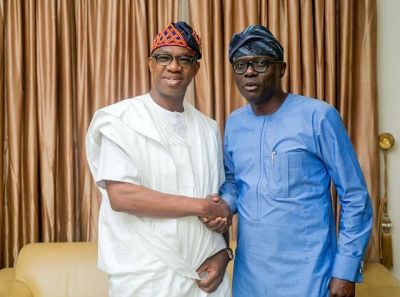 Ogun state Governor-elect, Prince Dapo Abiodun has disclosed his administration and of that of his counterpart in Lagos state, Babajide Sanwo-Olu had mulled plans to establish a “Joint Development Commission” to drive the Internally Generated Revenue (IGR) of both states.

He said the proposal is also geared towards enhancing rapid development and transformation of border communities of the two neighbouring states.

Abiodun also disclosed that improved security and upgrading of infrastructures would form parts of the major thrust of his government in the Gateway state.

The successful entrepreneur, oil magnate and real estate player spoke on Friday during a “Strategic meeting” with the state chapter of the Manufacturers Association of Nigeria (MAN) and other members of the Organised Private Sector at the factory of the Flour Mills in Agbara, Ado-Odo-Otta local government of the state.

Abiodun said he would resuscitate the Ogun State Road Maintenance Agency (OGROMA) within 100 days of being in office to address the deplorable township and inner city roads across the state.

OGROMA, the initiative of the administration of Governor Gbenga Daniel, which perfected the art of roads repairs and rehabilitation in the state, was phased out by Governor Ibikunle Amosun hours after he took his Oath of office in 2011.

Abiodun stressed that he would also build industrial parks and farm settlements across the three senatorial districts.

According to him, all uncompleted projects by Amosun’s administration would be completed because Ogun State taxpayers money have been invested in such projects.

He pledged to provide a conducive environment for businesses to thrive with improved security and Critical infrastructure.

He said: “I have known the governor-elect in Lagos state, Babatunde Sanwo Olu for a long time and we have both agreed to set up a Joint Development Commission to enhance transformation at our border areas and also to enhance the IGR of the state.

”Any uncompleted projects by the outgoing governor will be completed during my administration.”