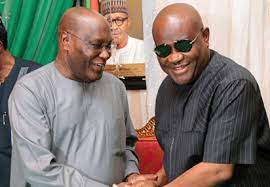 The group described the peace building as a good omen for the party and Nigeria at large.

While speaking on some of the contemporary issues bedeviling the country, National Coordinator of CLMASG, Princess Kemi Adesanya-Eboda hinted that, “no organization or home survives or make tangible impact in an atmosphere of disunity or conflict.

What we are seeing in PDP today, the reuniting of Governor Nyesome Wike and former Vice President Atiku Abubakar, is an expression of a deep-seated solidarity and for the future growth of our party, the PDP and a silver lining for Nigeria and Nigerians.

“When we look around the country today, little will anyone say otherwise that a viable opposition is deserving to drive Nigeria out of the woods which it is presently positioned since the exit of PDP from the first office in Nigeria.

We, as a party, cannot do much in our quest to redeem the image of the country in terms of it’s economy, citizens political interest and participation, security, citizens right, freedom and togetherness should we have unsettled differences among us. We need to sort these things out.

Evidently, the time has not just come rather the process has began.

Princess Kemi Adesanya-Eboda and her executives intimated that felicitations from members of her platform which draws wider membership from the length and breadth of the country has been pouring in unsparingly indicating that Nigerians have PDP at heart.

“We cannot help but imagine the great solidarity expressed by Nigerians, especially members of our support group, CLMASG, since the news went viral.

Even as we speak, you can see calls coming through, emails, text tones jingling owing to solidarities from all of us. This only points to the fact that Nigerians are well in favour of a comeback of PDP, they are, no doubts, looking up to the party to turn things around.

“The popular adage that charity begins at home has found its meaning in PDP through the instrumentality of this reconciliation.

On a final note, Princess Kemi Adesanya-Eboda and her Executives thanked the party leaders for the keen interest and growth of the party.

“So on behalf of all members of Coalition of Like-Minds Atiku Support Group all over the country, we thank Governor Wike and former Vice President Atiku Abubakar for lifting the face of our great party by embracing this olive branch. It means so well for us as citizens of Nigeria. And to everyone who was instrumental to this course, we can’t thank you enough.

“Let’s all continue to build bridges, strengthen lose bonds, unite with friends and reaffirm our commitments to ensure we redeem the Federal Republic of Nigeria.