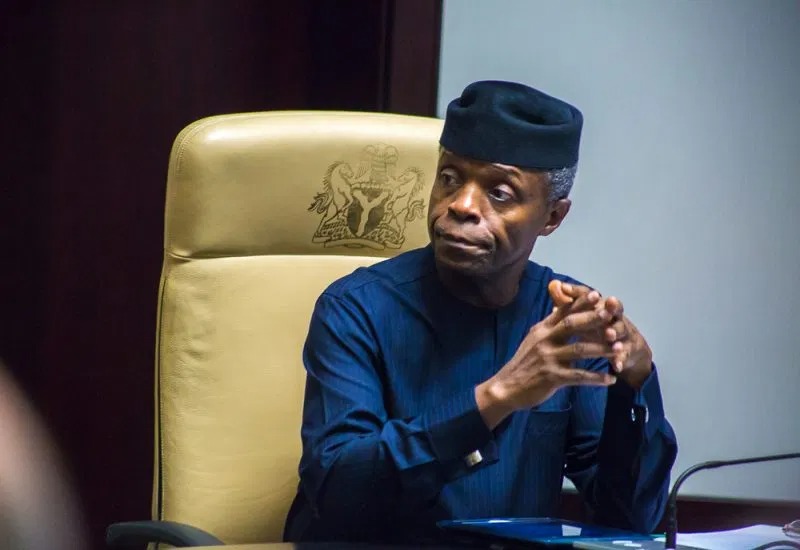 As we enter the peak of the political season, political observers, analysts and the general public remain curious as to the unfolding drama and the prospective leading actors and possible outcomes of the 2023 elections. It is against this backdrop that a frontline group of eminent Nigerians has identified Vice President Yemi Osinbajo as the most qualified and competent Nigerian to lead the country in 2023. The WE MOVE Group made this submission at its virtual inaugural meeting which drew participation from leading professionals, business people and politicians within Nigeria and the diaspora. The Group’s global virtual meeting was to formally unveil its programs which are focused on building a robust nationwide movement to ensure that HE Professor Yemi Osinbajo is elected president at the next general election come 2023.

Speaking at the event, a prominent politician and lead spokesperson of ‘WE MOVE Group’, Mr. Wale Akingbade noted that the decision to endorse the Vice President came after careful deliberations and consultations with decision-makers and opinion leaders from diverse parts of the country. He said the Group’s endorsement of the Vice President is hinged on Prof. Yemi Osinbajo’s six identified strengths and qualities which include time-proven credentials, competence, character, conviction, compassion, and commitment to national unity. Akingbade noted that these are evidence-based reasons that justify the choice of the Vice President to succeed the current president, his boss, President Mohammadu Buhari. Akingbade gave further credence to the Vice President’s humility and loyalty, by quoting copiously from the recent birthday tribute made by President Mohammadu Buhari who commended Prof. Yemi Osinbajo for working selflessly and sacrificially to bring government closer to the people and placing people at the center of governance by regularly advocating policies that support human development and puts the welfare and well-being of Nigerians first.

The Group noted that the need for a rounded, competent, and credible candidate with nationwide appeal and acceptance was a fundamental imperative and deciding factor for the next election and the overall future direction of the country.

Mr. Tony Epelle, a distinguished lawyer and convener of the WE MOVE Group noted that to build a new Nigeria, there must be a collective of men and women who are prepared to make the sacrifices to stick together to fight injustice, to fight corruption and to insist on the rule of law as key pillars for building a healthy progressive society.  He observed that the Vice President is a principled leader, with the right people focused and public service credentials to lead Nigeria at a critical time when the nation needs experienced, skillful, stable hands at the helm.

Speaking on the Vice President’s impressive antecedents Akingbade observed that at any time Prof. Yemi Osinbajo had performed in an executive capacity, either as Attorney General in Lagos State or as Acting President of the Federal Government, his inspired policies, actions and initiatives in the public sector have greatly shaped and continue to shape, social, legal, economic and political development in Nigeria. He noted that even in situations where the Vice President does not wield total executive power, he uses advocacy to advance causes he believes in, like his laudable rehabilitation/welfare initiative in the war-torn North East of Nigeria.

Alhaji Zakari Buba, a businessman and convener of the Group noted that Nigerians have a rare opportunity to support the candidacy of the Vice President who he described as a one-in-a-million politician with an impeccable and unblemished record of integrity, honesty and trustworthiness. He observed that those who have had the privilege to associate with Prof. Yemi Osinbajo will attest that he is the kind of leader we need at this critical phase of our nationhood, given his transparent commitment to the progress of people from every part of the country and his uncommon fairness and loyalty even in very difficult times.  He explained that there is nothing on the VPs record that shows any form of insubordination, betrayal of trust, abandonment of his principles, or default on government programs and policies. On a broad scale, he noted that the Vice President combines a considerate and inclusive nature with firm convictions, clear focus and a can-do spirit on how to deliver better quality of life to Nigerians.

Speaking on the Group’s unanimous support for the Vice President, Mr Akingbade reflected that since independence, Nigeria has been in search of a leader who will rise above the differences to embrace our commonalities. He observed “the Vice President is not a desperate politician, but someone with a genuine heart for service… and our mandate is to continue to engage with like minds across religious and ethnic divides to see the need to have a great president like Vice President Yemi Osinbajo come 2023”

He declared that apart from being one of the hundreds of Groups supporting the call for Prof, Yemi Osinbajo to run for President, WE MOVE Group is also a think-tank of accomplished Nigerians committed to contributing viable solutions to help drive national growth and development.  He noted the Group is part of a growing national movement comprising of professionals, business people, politicians, and youth from every segment of society who believe that the transformation of Nigeria is possible. Commenting further on the mission of the Group, Akingbade stated, “we need to build a strong Nigeria that is one people, one nation of men and women of all faiths, of all ethnicities committed to a country run on high values of integrity, hard work, and justice for the progress of all. No one represents these ideals better than the Vice President and that is why we are confident he is the one to lead Nigeria into a new dawn come 2023”

Why Most People Call Me Pogba Junior – Fast-rising Football Star