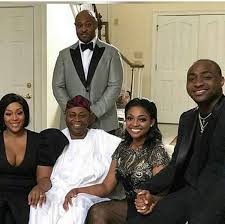 Political power, trade and a lot of oil make up some of Nigeria’s richest families

Aliko Dangote, his wife and two of his daughters (NaijaGists)
Growing up in a family that is anything other than insanely wealthy in Nigeria means there are certain lifestyles you will never have a taste of, except fortune and generational wealth decide to smile on you.

Nigerians know the distinct sound and mannerisms of wealth. We also recognise familial wealth, the kind of financial power and the attendant respect that certain families command.

A fair number of these families are built around patriarchs who made their wealth in the early years of Nigeria’s history. Today, these families control wealth, the economy and power in certain areas in ways that only money can in Nigeria where power is the ultimate currency.

Whatever attempts to create an exhaustive list or ranking of Nigeria’s wealthiest families would be frustrated by the clear absence of public records or any form of honesty from the members as to how much they are worth.

Still, the lists exist and this one compiled by MANUCHE, a youtube channel, seems a bit close to the mark in bringing up some of the most familiar names and a few that have flown beneath the radar for quite a while.

Here are 10 of the richest families in Nigeria

Hidden in the town of Okada, the Igbinedion Family is one of the most powerful families in Edo State and Nigeria’s culturally-diverse South-South.

The family’s patriarch is the Esama of Benin, a chief of the Bini Kingdom who was conferred by Oba Akenzua II. He is said to have started off as a police officer before becoming involved in the car business, first as an employee and later as head of his own auto care outfit.

It was from here that he spread his span, starting off a ring of businesses, including the now-defunct Okada Air, Igbinedion University, Kada Plaza and Igbinedion Television.

His son, Lucky Igbinedion was Governor of Edo State, from 1999 to 2003. His daughter, Omosede Igbinedion currently serves in the Federal House of Representatives, as the lawmaker representing Ovia North Federal Constituency.The Igbinedion is also know for there lavish partieswhich can be held in editions, from the country home in Okada to South Africa and London, where it holds investments in real estate.

The Folawiyos were set on their path by Chief Wahab Folawiyo. After studying at the University of North London and returning in 1951, he founded Yinka Folawiyo and Sons, an import and export business.

The company would later be transformed into the Yinka Folawiyo Group (with Yinka Folawiyo & Sons remaining as the de jure parent company, which divested into energy, agriculture, shipping and real estate. Chief Folawiyo was a cheerful philanthropist during his life.

After his death, his son Tunde Folawiyo has taken charge of the company.

The Sarakis may be renowned for political power but they are also one of the richest families in the country.

Bukola Saraki is the most prominent member of the family as things stand but his rise to power began as an understudy of his father, Olusola Saraki.

Before his death in 2012, the older Saraki served as a senator in Nigeria’s Second Republic and as chairman of the now-defunct Societe Generale Bank.

Bukola Saraki served as Governor of Kwara for two terms before joining the Senate.His sister Gbemisola is also a senstor

Perhaps due to its presence in politics and public service, the family has managed to keep most of its financial dealings private.

The recently-released Paradise Papers however suggest the presence of real estate assets outside the country.

The Tinubu name is one that commands heavy respect in most circles in Lagos.

However, the pending uncertainties about the parenthood of its most popular member, former Lagos State Governor, Bola Ahmed Tinubu pose a challenge in ascertaining the true extent of the family’s ties.

His mother, Chief Abibatu Mogaji was a wealthy Lagos trader and businesswomen as well as one of the most influential community leaders. Prior to her death in 2013, she was the President-General of the Association of Nigerian Market Men and Women.

If you will believe the hearsay, her son is one of the wealthiest men in the country, with enough in investments to create a dynasty of its own.

The Lion of Bourdillion spent most of his professional life as an Executive at Mobil, before starting his political career in 1992. Tinubu is believed to be invested in most of Lagos’ prime real estate, and has been charged or invited with storing wealth in numerous foreign accounts.

You may have been excused of not knowing the Adeleke family before 2012, Davido, B-Red, Sina Rambo and the dancing senator have changed that.

The Adeleke Family is built around the band of brothers; Adedeji Adeleke, Ademola and Isiaka Adeleke.

The former, Adedeji Adeleke, is the founder and Chief Executive of Pacific Holdings Limited which has investments in real estate, banking, transport and oil. He is also the founder of Adeleke University, a privately-owned tertiary institution in Ede, Ondo State.

Senator Ademola Adeleke is mostly known as the dancing senator. He is seen here with his children including the on-and-ff musician known as Sina Rambo. (AKPraise)

Ademola Adeleke is mostly known for his emotive, playful dancing. The former scholar is the Senator representing Osun-West Senatorial District.

It is a role he came to hold after the demise of his brother, the late Isiaka Adeleke who was a stalwart of the PDP in his home state.

The family’s younger generation is more involved in music and entertainment. David Adeleke is one of the biggest afro-pop stars of his generation. Bayo and Sina, his cousins, have also enjoyed moderate success as musicians.

Decades after the death of its patriarch, the well-loved M.K.O Abiola in the late 1990s, the larger Abiola family is still one of the wealthiest in the country, a feat considering how big the family is and the fact that most of its wealth is a function of the personal wealth Abiola amassed in his lifetime.

Easy and unassuming, Kola Abiola makes a nte to stay out of the public eye. (Nigerian Monitor)

Before deciding to run for office in 1993, Abiola was seen as the wealthiest man in Nigeria. His effusive philanthropy was matched by the extent of his business investments, stretching from banking, finance and education to transport, publishing and oil.

Since his death, his children have continued to expand and enjoy their father’s wealth. The most prominent of them, Kola Abiola managed what’s left of his father’s companies, choosing to maintain a low profile.

The Danjuma family owes its wealth to Theophilus Danjuma, who is one of the most influential persons in Nigerian history.

After participating in some of the more notable coups, he was Chief of Staff of the Nigerian Army from July 1975 to October 1979.

Legend has it that part of his bounty was the right to one of Nigeria’s fabled oil blocks. Danjuma is the chairman of South Atlantic Petroleum.

His brother, the lesser known Musa Danjuma, has his hands in trade and shipping as the Executive Chairman of Nigeria America Line Limited and Comet Shipping Agencies.

The most prominent member of the second generation is Yuki Danjuma, a son of T.Y. Danjuma who manages the family’s real estate portfolio as the co-founder of Attollo Realties Limited.

The Danjumas are one of the North’s wealthiest families.

Straight from the heart of the oil-rich Niger Delta, the Briggs Family is one of the wealthiest in the region and the country at large.

The family’s patriarch, Chief O.B Lulu-Briggs is one of the wealthiest Nigerians alive. Most of this is traced to his ownership of the private oil and gas exploration and production company, Moni Pulo Limited.

According to Forbes, “Moni Pulo was awarded its first oil block in 1992 when the Nigerian president at the time, Ibrahim Babangida, was encouraging indigenous participation in the upstream sector of the oil and gas industry.

Along with his wife, a pastor, he funds the O.B Lulu Briggs Foundation, which provides humanitarian services to rural communities.”

You already know Aliko Dangote, the richest black man alive and savvy businessman. The relationships that spurred his success in business and the families that have been built around them are not known to many.

The story begins with Chief Al-Hassan Dantata who lived through the height of colonial rule, from 1877 to 1955. Dantata was a Northern Nigerian trader in kola nuts and ground nuts and distributor of European goods.

He was one of the major suppliers of raw materials to large British trading companies with business interests in other West African countries. Dantata’s company supplied large British trading companies with raw materials and also had business interests in the Gold Coast. At the time of his death, he was one of the wealthiest men in West Africa.

The family has produced many of the most shrewd businessmen in Nigeria’s recent history including Mamuda Dantata who spread the family’s interests across West Africa and Mudi Dantata who passed in 2005. The most notable, Aliko Dangote, is the elder Dantata’s great-grandson.

… or should I say, the Ibru Organisation.

The Ibru Family are from the town of Agbarha-Otor, near Ughelli in Delta State. The family’s original patriarch was Chief Peter Epere Ibru.

Their son, Michael Ibru founded the Ibru Organisation, an umbrella firm to manage the family’s future businesses and assets.

The same year, he partnered with Jimmy Large, an Englishman, to form the Laibru general trading company, and also bought a share of Ace Jimonma, a construction firm.

Ibru was a pioneer in distributing frozen fish in Nigeria; a trade which is worth billions in naira every year. Through acquisitions and joint ventures, he grew the original organisation to have interests in brewing, construction, petroleum, agriculture and industry.

The family’s wealth has been built on a host of joint deals, meaning even as most of the brothers are late, the new generation has picked up the charge with ease.

The family owned the now-defunct Oceanic Bank and Aero Contractors.

The Ibrus own Guardian Newspapers, Federal Palace Hotel and Michael and Cecilia Ibru University in Delta State, with massive real estate investments the world over.

Here are 10 of the wealthiest families in Nigeria was last modified: August 29th, 2018 by Igbokwe John