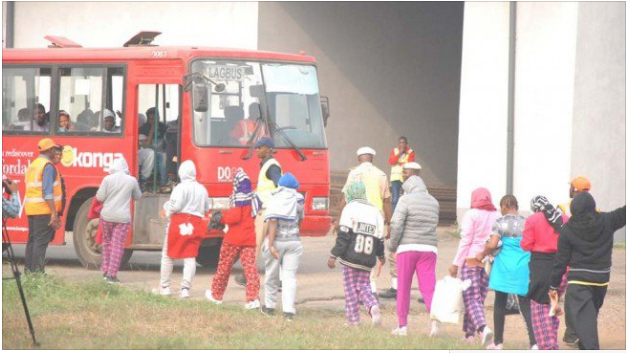 Not less than 155 Nigerians have voluntarily returned from Libya just two weeks after 171 returned home from the north African country.

They were brought into Nigeria on Thursday aboard a chartered Nouvel Air aircraft with registration number TS-1NB.

The News Agency of Nigeria (NAN) reports that the aircraft landed at the Murtala Muhammed International Airport, Lagos at 6pm.

Like the initial group which returned on March 7 after being stranded in Libya while en route Europe, the returnees were brought back by the International Organisation for Migration (IOM) and the Nigerian embassy in Libya.

They were received at the Hajj Camp area of the airport by officers of the Nigerian Immigration Service (NIS), the National Agency for the Protection of Trafficking in Persons (NAPTIP) and the police.

Officials of the National Emergency Management Agency (NEMA) and the Federal Airports Authority of Nigeria (FAAN) were also on ground to receive them.

Onimode Bandele, the director, search and rescue, NEMA, told journalists that various agencies were on ground to welcome the returnees to their fatherland.

“We are here to welcome our nationals who have signified their intention to come back home from Libya,” he said.

“The returnees are being assisted back home by IOM, having been negotiated out of detention centres in Libya for various immigration offences.

“We had three medical cases on board; one is paralysis, the other one is a psychiatric problem, while the third is a minor injury which has been taken care of with the effort of the IOM doctors and the Port Health Authority.”

Bandele said that the Nigerians had gone to Libya in search of greener pastures, which unfortunately turned out to be a terrible experience for them.

The NEMA official disclosed that the voluntary return started in 2001 and that about 7,000 Nigerians have been assisted by IOM to return home from various countries.

“This means that between March 2016 and March 23, 2017, IOM assisted 1,521 Nigerians that have voluntarily returned to the country.

“This exercise is to ensure that they are well received and we are also in touch with their respective state governments,” he said.

The returnees were profiled by immigration authorities and were each given N19, 695 for transportation to their respective states. (NAN)