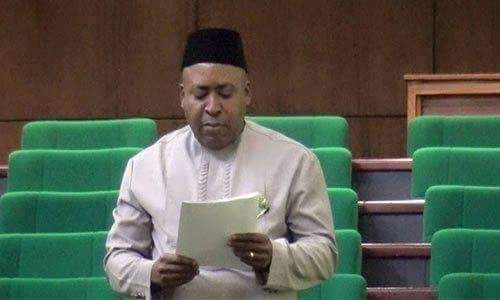 Mr. Nse Bassey Ekpenyong, an honorable member of the House of Representatives, on Thursday arraigned at the Federal High Court, Uyo, Akwa Ibom State, for allegedly forging a polytechnic diploma.

One of the charges preferred against the federal lawmaker says; “That you Nse Bassey Ekpenyong on or about 22 November 2012, at Uyo, within the jurisdiction of this Honourable Court did make a document to wit: Abia State Polytechnic National Diploma Certificate in Business Administration with No. 001181 dated 22nd November, 2012 with intent that it may be acted upon as genuine which you knew to be false and thereby committed an offence contrary to Section 1 (2) (C) of the Miscellaneous Offences Act Cap M 17 of the Revised Edition (Laws of the Federation of Nigeria) 2007 and punishable under section 1 (2) of the same Act.”

Ekpenyong, who cut the image of a dejected and lonely man, pleaded not guilty to the charges.

The accused’s lawyer, Emmanuel Isangedoho, argued for his bail which was opposed by the EFCC represented by Ahmedu Arogha.

However the presiding judge, Ijeoma Ojukwu, granted the lawmaker bail in the sum of N10 million.

The judge said the case would be treated speedily and adjourned the case to April 12.

Both agencies had written to the institution, requesting confirmation of the papers presented.

They also wrote to INEC demanding Ekpeyong’s affidavit in support of his personal particulars.

These were supplied by the electoral commission.

The petitioners had also alleged that Ekpenyong fraudulently obtained salaries, allowances, and other financial benefits through his invented educational qualification.

In a letter dated May 24 2016,  and titled “Investigation Activities Nse Bassey Ekpeyong Registration Number: 2009 NDE/3829/BA”, the EFCC requested the Registrar of the institution to confirm if Ekpeyong was a student of the institution. If he was, the agency demanded the certified true copies of his statement of result and certificate.

The anti-graft agency also requested the institution to confirm whether or not it issued the papers submitted by Ekpeyong.

Earlier, the ICPC had written to the Polytechnic demanding the same information.

In its letter dated 12 May and signed by Agha-Ibe, head of the agency’s Special Investigation Unit, the ICPC requested the Rector of the Polytechnic to ascertain Ekpeyong’s claims of studentship and graduation.

Responding to the enquiries, the Abia State Polytechnic, in a letter addressed to the office of the ICPC Chairman, stated that Ekpeyong was never a student of the institution.

Dated  May 21, 2016, and signed by Dr. (Mrs.) Constance Evuline, acting Registrar, the letter read: “Having done a thorough search on our records, we write to confirm that the above named (Ekpeyong) was not a student in the Department of Business Administration of Abia State Polytechnic, Aba, at any period at all. We also wish to attest that copies of the statement of result and certificate attached by him were not issued by the polytechnic.”

In response to the EFCC’s enquiry, via a letter dated  June 62016, the Abia State Polytechnic similarly disowned Ekpeyong.

Signed by the acting Registrar, the letter added that the two persons, whose signatures appear on the certificate and statement of result submitted by Ekpeyong, had left the institution as 2011.

As part of its investigations into the scandal, the EFCC, in July 2016, arrested Ekpeyong, who was later released on bail.