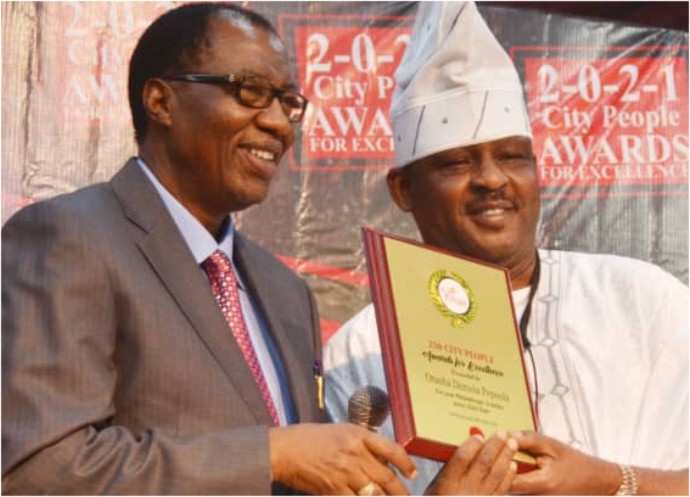 This year’s City People Awards for Excellence has come and gone. But the beautiful memories of the grand event will continue to linger on in the minds of all the celebrities who travelled to Abeokuta, from far and near, to be part of the event.

For 8 hours on Sunday 25th April, 2021, City People shut down Abeokuta, the capital city of Ogun State, as many gaily dressed celebrities stormed the brand new Conference Hotel in Abeokuta, which has become the leading hotel in the rock city right now. Below are exciting gists from the event.

The venue was the Banquet hall of the Conference Hotel in Abeokuta. The hall was beautifully decorated in the Red and Black corporate colours of City People which transformed the look of the hall.

ABOUT THE CHAIRMAN OF THE EVENT

The Chairman of the 2021 City People Awards for Excellence was His Royal Majesty, Oba Saburee Babajide Bakre, (Jamolu II) the Agura of Gbaguraland who was coronated as Kabiyesi on 18th August 2019.

Although Kabiyesi could not make it, he sent one of his titled chiefs, Hon. Chief Sabur Adesina Aroyeun. His representative came with the staff of office to show how important the event was to Kabiyesi.

Hon. Aroyeun who looked very royal in his white Agbada outfit is the Seriki Ibadan Gbagura, Osi Oje Gbagura and Asiwaju Gbagura. He is a seasoned politician. He was a member of the Ogun State House of Assembly where he represented Abeokuta North between 2003-2007. He was then Chairman Committee on Works. Between 2007-2011, he was also S.A to the Governor on Employment Generation and Inter, SA on Assembly Matters in Ogun State.

His Excellency, Otunba Gbenga Daniel, the 2 term Governor of Ogun State delivered the Keynote address which earned him a standing ovation. He drove in from his Sagamu residence and once he arrived the premises of the hotel, the tempo changed. He came with a vibrant Ogun East politician, Sosanwo Adeola who contested for the Ogun East Senate seat during the last elections.

OGD as he is fondly called, looked dapper in suit. He was the cynosure of all eyes, as all the guests were eager to meet him one-on-one.

He commended the Publisher, SEYE KEHINDE for sustaining City People Magazine for the past 25 years. He urged the media to be objective and fair in its reportage of events.

One of the awardees, Fashina Olajide, the young CEO of OGIC looked stylish at the event. He came with huge followers to support him. One of those who came with it was Otunba Wale Saranda, the Babalaje of Yewaland who looked smart in his Kaftan.

The Alaperu of Iperu-Remo, Oba Basibo is one of the leading traditional rulers in Ogun State. He is also a very stylish man. Whenever he steps out to events he forever looks stylish. He looked dashing in his mint green richly embroidered Agbada with his walking stick and richly designed cap to match. His green handwoven shoes stood out. He won a Lifetime Achievement Award.

Talk of one traditional ruler in Ogun State who has got style & finesse and his name will pop up. That is Oba Adenugba the Ebumawe of Ago-Iwoye. He is a handsome man who is blessed with a royal bearing. He looked good in his blue Agbada with a walking stick to match. He won a Lifetime Achievement Award.

In his younger days, High Chief Bode Mustapha was a Public Relations impressario. He is also known to be one of the best dressers in the corporate world. High Chief Bode Mustapha is the Osi of Egbaland. He stormed the event that day looking royal. He is tall and slim. And his richly embroidered Agbada sat well on his pencil-slim frame. Don’t forget that BM as many call him is a Golfer of over 3 decades. He was honoured with a Lifetime Achievement Award.

What made the event a lot more colourful was the fact that there were 3 masters of ceremony. It was Dr. Smile that started the event and when Gbenga Adeyinka arrived he co-opted into the programme. Of course, Alariwo attended the event also and he was called upstairs during the programme.

One of the awardees, Mrs. Olajumoke Adekoya pepped up the show. She is a big events organiser in Lagos. She is the Creative Director of Seamless Events. She is an Event Consultant and Event Decorator who had successfully planned so many social and corporate events both home and abroad. She invited a lot of her friends. Her husband Otunba Tunji Adekoya also attended.

HON. PRINCE GBUYI ADESANYA WAS THERE TOO

This handsome man sat in one corner enjoying himself. Hon. Prince Gbuyi Adesanya is the Federal Commissioner, Ogun State. He works with the Federal Public Complaints Commission. He is from Ijebu-Ode in Ogun State.

One of the awardees, Funmi Ayinke Waheed Adekojo was very visible at the event. She made a grand entry accompanied by her husband’s friend and many youths whose lives she has touched. She won 2 awards. Over the last few years, thousands of students have benefited from her support and many more are still benefitting. No wonder the youths stormed the awards to cheer her up. She sings also.

She sang the National Anthem and that earned her resounding applause. She also thrilled the guests with one of her songs, accompanied by her ballet dancers. She started out as a musician last year.

Although the founder of the Rosula Foundation was not in the hall, many felt her presence due to the higher-powered delegation she sent to represent her. Rosula Foundation was set up a few years ago as a Philanthropic organisation to touch lives by Mrs. Rosemary Osula-Atu. She reached out to many people last year during the Covid-19 lockdown in Nigeria and the UK. It is for her Philanthropy that City People is honouring her today.

Oba Adeyemi Adekeye was honoured with a Lifetime Achievement Award. Both were up in Abuja for a Legislative sitting on Traditional rulers.

Segun Rockers is an ace singer who lives in Abeokuta. He has been around for decades. He was honoured at the event. He was given a City People Special Award of Excellence for his remarkable contributions to the Music industry.

He is a successful entertainer who has been into music since age 9 when he was a member of the choir. He has been able to sustain his music career for decades. Though he is based in Abeokuta, he performs all over the country.

City People celebrated Otunba Daniel at the Award, with a Lifetime Achievement Awards for his contributions to Politics. This former Ogun State Governor needs little introduction. His story will fill about 5 volumes in book form. But suffice it to say that he is one of the leading politicians in Nigeria and a leader of men.

She received a City People Special Award of Excellence for her remarkable contributions to Culture & Tradition. Princess Toyin Kolade is an accomplished businesswoman who has done well for herself. She is big in the Apapa area of Lagos, which explains why she is called Iyalaje Apapa. She is also into Culture & Tradition. She is to be installed as the brand new Iyalaje Oodua by the Oni of Ife in July.

He was honoured with a City People Special Award of Excellence for his remarkable contributions to the Business sector. Popularly called Afo Guarantor, Chief Afolabi Sodunke, is a Construction giant. He is a big-time businessman who handles big contracts across the South-West.

Hot Gists From 2021 City People Awards In ABEOKUTA was last modified: May 4th, 2021 by Seun Emmanuel

How I Turned My Love For Hair Into Big Business – JOAN O. ASAMAIGOR