Home News How BUKOLA SARAKI’s Father Taught Him The A.B.C Of Politics
News

How BUKOLA SARAKI’s Father Taught Him The A.B.C Of Politics 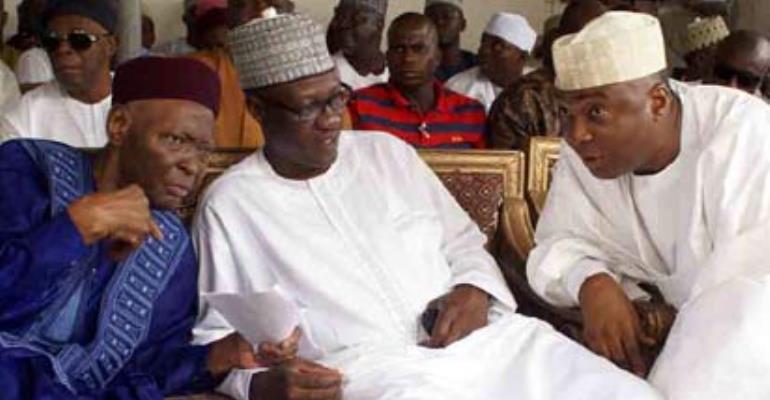 Several years ago, when Ilorin strongman, Dr. Olusola Saraki tried to convince his son, Bukky to join politics, he always rebuffed his dads overture. Bukola who was then running Societe Generale Bank didn’t quite like politics. He never hid his contempt for politics. His dad was the exact opposite. Bukky a medical doctor like his dad just couldn’t understand why his father was so much in love with the grassroot people of Ilorin, so much so that he was always in their midst and their home, both in Ilorin and Lagos were always a beehive of activity, as the masses of the people throng there to see him.

Bukky just couldn’t imagine he being in the shoes of his father, popularly called Oloye by many. He was brought up as a private person, in Wealth and Splendour. Each time, Oloye spoke to Bukola to prepare to join politics, he would come up with one excuse or the other to change their discussion.

Oloye, who had built up a political dynasty that had produced a few Kwara governors, felt he needed to get his son involved in politics, a game he loves so much. Bukky is his 1st son who took after him in very many respects.

He studied Medicine like his father. And he did not practice for too long before he veered into business and then politics. He also rose to become Senate President. His dad was Senate Leader.

It was after serious persuasion and intense pressure which took years that Bukky finally agreed to join politics. His dad had explained how all those he invested in betrayed him and he thought it was time for him to make his son the next Governor of Kwara. He did

Many people don’t know that in his lifetime, Dr. Abubakar Olusola Saraki was a great man and a grassroot politician who understood the game of politics. Till he died on the 14th of November 2012 at the age of 79, he held Kwara people spellbound.

He was a Senator in the 2nd republic (1979-1983). He was a ranking nobleman of the Ilorin Emirate from Agoro compound in Agbaji.

His mother was from Iseyin in Oyo State and his father was from Ilorin. His paternal ancestors were Fulanis who came from Mali about 150 to 200 years earlier.

He was educated at Eko Boys High School. He attended the University of London, and St George’s Hospital Medical School, London. He worked as a Medical Officer at the General Hospital, Lagos and the Creek Hospital, Lagos.

Olusola Saraki first entered politics when he ran in the 1964 parliamentary election for Ilorin as an Independent, but failed to win.

After the election, he returned to his medical practice in Lagos, only returning to party-politics in 1978/79. He died on Wednesday 14 November 2012 in Lagos at the age of 79 after a losing a battle with Cancer. He was laid to rest in Ilorin.

Politically, he was an icon and in 1977, Olusola Saraki was elected as a Member of the Constituent Assembly that produced the 1979 Constitution. In 1979 he was elected a Senator of the Second Republic, and became Senate Leader. In 1983 Saraki was re-elected into the Senate on the National Party of Nigeria (NPN) platform.

In 1998, he became a National Leader and member of the Board of Trustees of the All People’s Party (APP), contributing to the APP success in Kwara and Kogi States. He assisted Mohammed Alabi Lawal in becoming Governor of Kwara State. In 2001 he was head of a team from the Arewa Consultative forum, a Northern cultural  and political group, sent to meet and discuss common goals with Northern state governors and other leaders.

Later Saraki switched allegiance to the Peoples Democratic Party (PDP), and in the 2003 elections supported his son Bukola Saraki as candidate for Governor of Kwara State in April 2003, and his daughter Gbemisola R. Saraki as senator for Kwara State Central in April 2003.

His son Bukola Saraki has taken after him. He has been the Senate President since June 9, 2015 in the 8th Senate of Nigeria.

Oloye was the founder of defunct Northern Union (NU). His death marked a virtual end of an era defined by political activism, philanthropy and most importantly the prolonged hegemonic grip of Kwara politics, the influence which analysts say was a product of his resilience, dedication and unprecedented generosity through which he won the hearts of many Kwarans especially the womenfolk who constitute a strong and potent electoral bloc in the state. For close to four decades, Saraki was not only the deciding factor in Kwara politics, he was more or less the only factor which determined the political direction of the state. He was no doubt one of the most successful politicians in Nigeria having installed virtually all the civilian governors the state had produced since its creation in 1967 including his son.

Those he installed but fell out with him never got the chance for a second coming. In 1979, he single-handedly installed the state’s first governor, Adamu Attah. When Attah fell out with him in the subsequent election year, he joined forces with the then opposition Unity Party of Nigeria (UPN) and installed Chief Cornelius Adebayo. In 1999, after the return of democracy in Nigeria, he installed another governor, Alhaji Mohammed Lawal on the ticket of the All Peoples Party (APP). Before the 2003 election, the affection between Lawal and Saraki had gone sour. Saraki dumped Lawal and installed his son, Bukola, as the next governor.

Under his watch, Bukola got the ticket for a second term in office in 2007, thus becoming the first governor to rule for two tenures. However, Saraki’s major defeat to the chagrin of many ardent political watchers was in 2011, when he floated the Allied Congress Party of Nigeria (ACPN), on which platform he sought to install his daughter, then a Senator, Gbemisola, as the next governor. The attempt was not successful as the People’s Democratic Party PDP), backed by his son, won the election.

That probably was his major defeat since his foray into politics. However, no sooner than the election finished than there was a rapprochements within the Saraki’s political empire as the ACPN loyalists and supporters were asked to shift loyalty to the PDP. With his death in 2011, many politicians and observers opine that Kwara politics can never be the same again.

How BUKOLA SARAKI’s Father Taught Him The A.B.C Of Politics was last modified: August 5th, 2018 by City People