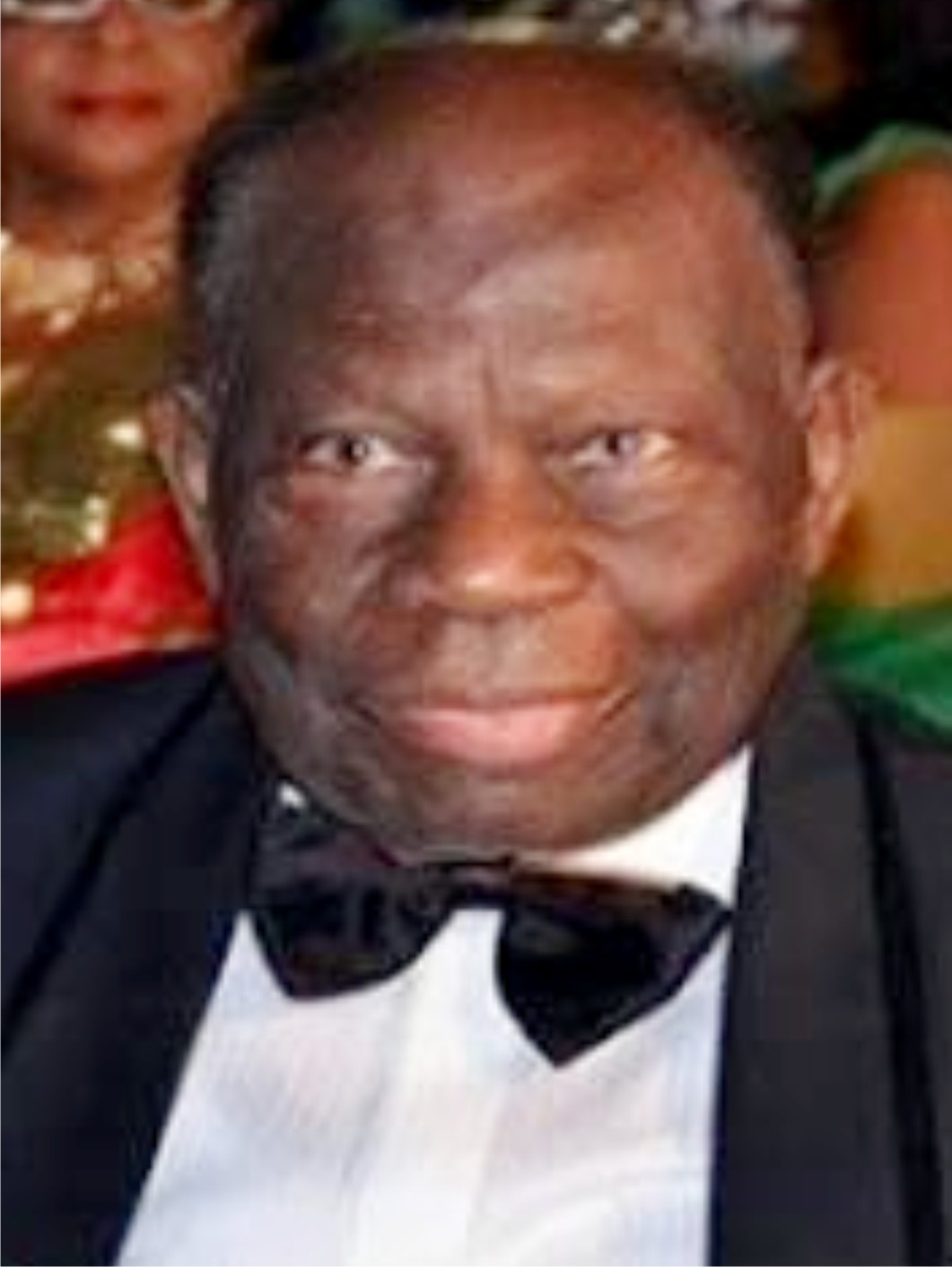 It was a colourful dinner celebration of 100 years held in honour of the first chartered accountant in Africa, Pa Akintola Williams whose numerous achievement is outstanding in all spheres of life. On his birth day, Friday, August 9th 2019, dignatries from all walks of lives came together to give a standing ovation to the man who has touched several lives in the active years of his career and beyond.

The beautiful event held at the Shell Hall, Muson Centre in Lagos where guests were treated to a sumptuous 3 course meals, exotic wines, cocktails and digestives.. It was a celebration of the beautiful 100 years on earth of an enigma whose exemplary life has become a source of template for many corporate individuals and many corporate organizations as a whole. Pa Akintola Williams lived a good life and he is still enjoying it seeing his children gathered the world together to celebrate him for his kindness, philanthropic nature and impact he has made in people’s lives.

The dinner celebration started  few minutes past 6pm after which many guests were ushered in with a beautiful performance by members of the Musical Society of Nigeria, MUSON which Pa Williams is the Co-founder. After which the opening prayer was done by the senior pastor of House on the rock, Pastor Wale Adefarasin, the welcoming address was read by Abimbola Akinjide SAN, the pretty wife of one of Nigeria’s finest renowned SAN, Chief Richard Akinjide. The toasts of the evening was done by Nigeria’s former head of state, Gen Yakubu Gowon ably supported by the celebrant’s son,most distinguished guest, Seni Williams Esq and  Akintola Williams Esquire, Ambassador Arthur Mbanefo, CON . The cutting of the beautiful white and gold birthday cake was coordinated by the former governor of Ogun State, Senator Ibikunle Amosun while acknowledgement was by the celebrant’s daughter, Tokunbo Williams. The host and hostess of the ceremony were Tokunbo Williams, Seni Williams,Remi and Niyi Williams. The master of ceremony was by Chief Olufemi Adeniyi- Williams joined by foremost event anchor, Sunday Okundalaiye popularly known as Saco.

Sitting close to the celebrant were 3 former ex- presidents, Gen Yakubu Gowon, Chief Olusegun Obasanjo and Chief Earnest Shonekan alongside the celebrants children. It was indeed a great honour for the Williams family as many top individuals who has contributed immensely to the country and beyond sat together to celebrate their patriarch.Some of the old grandmen who stormed the venue were Chief Chris Ogunbanjo, Prof Wale Omole, Sen Biyi Durojaiye, Sir Emeka Anyaoku and wife, Chief Olu Akinkugbe, Gen Ike Nwachukwu and wife,Otunba Subomi and Olori Abimbola Balogun, Otunba Adekunle and Erelu Ojuolape  Ojora, Chief Bode and Anana Emmanuel, Chief Pascal and Chinyere Dozie, Ambassador Chris Kolade and wife, Chief Femi Ogungbe and wife, chief Olu Akinkugbe and wife, Chief Femi Okunnu and wife, Alake of Egba land, Oba Adedotun Gbadebo and many others. The former governor of Lagos State and minister for works, power and housing, Babatunde Raji Fashola, chairman of UBA bank, Jim Ovia, were also part of the distinguished guest at the party.

At the birthday dinner, there were many top dignatries who had one or two things to say about the celebrant for his contribution to the country and how he has personally affected their lives.

Gen Yakubu Gowon and other dignified Nigerians made a good toast of the celebrant. Some of their speeches were “With all sincerity and total believe that this 100 year that Pa Akintola has been there, you can say truthfully that everything he has touched has become better because he touched it and therefore let us rise together with a respectful toast of 100 years to the birthday boy”.

Prof Wale Omole described him as been highly organized, keeps to time in his office and in all his programmes. He is a man of honour, integrity. He is very meticulously. Highly professional as an accountant in the continent”. Prof Phillips Asiejo says despite he is a man of many achievements and Africa’s first chartered accountant but more importantly as far as I am concerned, he is one of the very few Nigerians who created professional partnerships which have lasted beyond their retirement and have also grown.

Senator Biyi Durojaiye described him as a cerebral man who comes from a family that is a blessing to Nigeria. The Yeye Oge of Lagos,chief mrs Opral Benson says, Pa Akintola was my husbands friend, he is a very decent gentleman, He made many contributions to the country and he must have been a person that God has thrust his hands upon. He has indeed lived a good life”. Many others testify to his advices, his moral support, his wealth of experience, how he socializes when he was more younger, his honesty, very dedicated and in all a remarkable being. Other dignatries at the party were the Williams family, chief Teju Phillips, chief mrs Bola Obasanjo, former Ogun First Lady, Funsho Amosun,chief mrs Bisi Obasanjo,The high caliber of guests were later treated to an evening of fun with music by Shuga Band..

For Pa Akintola Williams FCA, CFR, CBE,  Life has indeed been kind to him because in his life time, he was celebrated by the whole world for his major achievements, his impact and contribution to the country at large. This is a man of honour, integrity whose dedication and determination made him one of the best and a house hold name in Nigeria. Popularly called the doyen of accountancy, he is the pioneer of Deloitte & Touche (formely Akintola Williams Deloitte) which is the oldest indigenous firm in Nigeria, established in 1952 when he was 33years of age.Through astute management the firm has grown in size and scope of services to become one of the largest professional services firm in Nigeria.Many accounting professionals numbering over 100 have gone through his company and has become chartered accountants today.

Between April 1999 and May 2004, two mergers with existing accounting firms were consummated which resulted in its being the largest accounting firm in Nigeria with a staff of over 600. The firm adopted the business name “Akintola Williams Deloitte” on July 30, 2004.

Over the years, Deloitte has built up a strong representation in several major African cities and has successfully undertaken a variety of business advisory and consulting assignments for clients in Nigeria and elsewhere in Africa. Born in Lagos on August 9, 1919. He was the second son of T. Ekundayo Williams. Alongside his younger brother, late Rotimi, who went on to become one of Nigeria’s most famous lawyers, his formal education began at Baptist Academy, Lagos, in 1927. Following the completion of his secondary school education at CMS Grammar School in 1938, Akintola Williams went on to attend Yaba Higher College on a United African Company (UAC) scholarship from 1939 to 1941 where he attained a Diploma in Commerce. As a student at Yaba Higher College, he was not interested in pursuing a career in accountancy: surveying was what had piqued his interest, but he found that he was unable to explore this avenue of learning because the College did not offer courses in surveying. He then entertained the idea of studying actuarial science and was preparing to move to England in order to take the course when he met an expatriate named John Selby.Selby was a chartered accountant working for the Inland Revenue Department in Lagos who counselled and convinced Williams to seriously consider a career in accountancy. Both Williams and Nigeria would forever be grateful to Selby for his advice.

In 1944, Williams left Nigeria on a government scholarship for the United Kingdom in order to train as a chartered accountant. The first few months in England were an ordeal for the young man as the Second World War raged on and racial prejudice reigned. Very few accountancy firms were willing to take on coloured articled clerks. After months of searching for a job, Williams joined the firm of Binder Hamlyn & Co. as an articled clerk. In 1946 whilst serving his articles and studying for his accountancy examinations, he completed his degree in Commerce at the University of London. In December 1949 Williams passed the final examinations of the Institute of Chartered Accountants in England and Wales and was admitted as a member of the Institute early in 1950. With this achievement he became the first Nigerian Chartered Accountant.After qualifying as a chartered accountant, Williams took up employment with the Colonial office in London and was posted to Nigeria. He returned home in 1950 to take the post of Inspector of Taxes where he would work with John Selby, whose advice years earlier had prompted him to consider accountancy.Williams resigned from his post at the Inland Revenue Department and set up his own firm. The firm of Akintola Williams & Co. was founded in May 1952 and was the first indigenous firm of accountants in Nigeria. This decision was a bold one, as he left behind a high salaried job with benefits such as free accommodation for a post with no assurance of steady income and intense competition with established international firms.

Operating out of his home in Obalende, the firm managed to survive its early years through the patronage of highly successful Nigerian entrepreneurs such as Dr Nnamdi Azikiwe, Chief Timothy Odutola, Sir Odumegu Ojukwu and Sir Mobolaji Bank-Anthony. In October 1957, having grown steadily, Akintola Williams & Co. was able to admit its first partner: Charles Sankey. The firm would go from strength to strength, eventually becoming Nigeria’s largest professional services firm.

Akintola Williams motivated and mentored many young Nigerians who followed in his footsteps and became qualified chartered accountants in the late 1950s and early 1960s. In December 1960 he co-founded and was named the first president of the Association of Accountants in Nigeria. A strong believer in one unified body of accountants in Nigeria, he was one of those who worked tirelessly to achieve the incorporation of the Institute of Chartered Accountants of Nigeria (ICAN) through an Act of Parliament in September 1965.

In 1982 the Nigerian Government honoured Williams with the Order of the Federal Republic (OFR). He retired from his firm in 1983 and was awarded ICAN’s first ever Gold Medal Merit Award in 1988. In 1997, Queen Elizabeth II conferred the title of Commander of the British Empire (CBE) on him in recognition of his services to the accountancy profession and for his promotion of arts, culture and music through the Musical Society of Nigeria (MUSON), a project he began in 1993. He is the first west African member and fellow of the institute of chartered accountants in England and Wales. Co promoter of the Nigeria Stock Exchange, Co-founder, The Musical Society of Nigeria, Former Trustees of Shell Nigeria Foundation, Former member, Commonwealth Foundation, Pioneer Chairman and Trustee, Africa Cancer Centre.

How Chief AKINTOLA WILLIAMS Produced Over 200 Accountants – As He Celebrates 100th Birthday was last modified: August 12th, 2019 by Tayo Oyediji