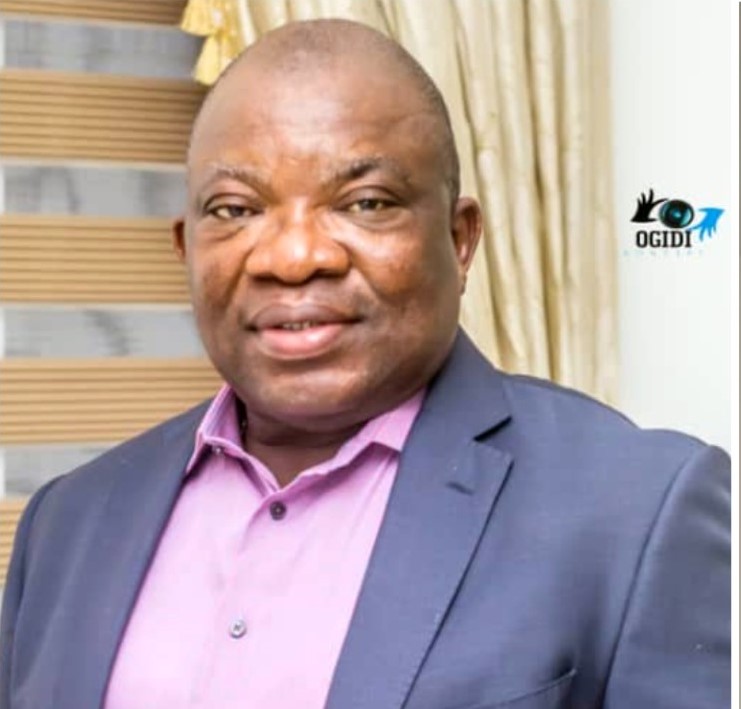 •Details Of His Classy Party At KFA Event Centre, LAGOS

It was a gathering of the Big Boys and Babes on the Island recently when NNPC top shot, Chief Edward Olajide Ogunleye, celebrated his 60th birthday in grand style. The event which took place on Saturday, 27th July 2019, had a touch of Class and Glamour at every turn of the high society event. City People’s Assistant Editor, SUNDAY ADIGUN, presents you all the gists from the classy birthday.

The venue for the 60th birthday celebration of Chief Edward Olajide Ogunleye was the prestigious KFA Event Centre in Lekki.  Words may not adequately express the huge influx of dignitaries who stormed the Event Centre for the party.  There was a traffic bottleneck on every road that led to the event center. The hall which conveniently seats over 1,000 guests was filled to the brim.

The decorating of the event venue was done by Makabis, one of the leading event decorators. You need to see how the KFA Event Centre was turned in to heaven on earth. It was a beautiful decoration with a  touch of blue. The decoration explained the love of Chief Olajide for Arsenal Club, a die-hard fan so to speak, as his photographs, right from the entrance blended with the beautiful décor. What about the entrance? You would think you were about to enter a palace. Kudos to Makabis.

Give it to the celebrator and his amiable wife any day, anytime. They sure know how to make their guests enjoy a party. Entering into the hall; the voice that welcomed you was that of no other person than  Seun Bankole, popularly known as SB with his SB live band. There is no gainsaying that the multiple-award-winning SB Live band has remained on top of her game. Why? They sure know how to make their guests feel at home and enjoy the party. But just when we thought we’ve had it all, another stage was seen beside SB’s stage. Seated elegantly, waiting for her turn to unleash her music was the beautiful Ayo Balogun, the Queen of Juju music. She remains an epitome of beauty, who has refused to grow old, as she keeps looking stunning every day. Ayo Balogun is 60+, but she doesn’t look it a bit. Her strength on stage is that of a 30 years old singing on the stage. Every bit of her performance brought life to the party. The matriarch of Juju music was a sensation to behold on the stage as she further accentuated why her appellation of a queen is well deserved.  DJ A game also did wonder at the after-party.

As it is in their usual practice, the catering outfits that took the guests on the delicious expedition were Ariya professional caterers, Malas foods, K4 Kitchen Bankress catering and Sir Bolly. They really did their best in providing high-quality services at the occasion. They served assorted meals according to the demand guests.

Other vendors did well too. Woligator and Er Chops took care of the small chops. Asun by Naija Butcher, while fish, dodo and dundun were served by Olanrewaju foods and Delightable Bolicious. What about cocktails? LAVADA & Exotic treat did their best. Garri and Groundnut were served with chilled water by Stylus Garri. RL desserts did well. The security guys from Golden Event Solutions were on point, while the beautiful ushers were supplied by Kezinton Event, who was also the Event planner.

One of the bubbling tables at the event was their table. Their beauty attracted guests to their table. They are the celebrator’s wife’s childhood friends, old students of New Era School, ‘85 set. You really need to see them. They looked so elegant in their Aso Ebi and they supported their friend, Mrs Olubukola Ogunleye. They are; Lanre Adegbunrin, Rita Alao, Oluwatoyin Odufuye, Dupe Bello, Oke, Bola Afolabi, Bimbo Oghenovo, Kafayat Bisiolu, Pat Ifejoku, Nike Adeyemi, Toyin Odunade.

One of the families that stood solidly behind Chief Edward and his family is the Atoki Family. All The men in the family are very handsome and cute. They all wore the  Aso Ebi. Their women are also beautiful to behold.

The 60th birthday celebration of Chief Edward Olajide Ogunleye attracted sophisticated and high-class babes. Why? Because the wife of the celebrant is also one of the happening ladies in town. She’s very stylish and beautiful too.

Over 100 celebrity women, who stormed the party in their Aso Ebi matched with white headgear added colour to the event.

Over 70% of the women present wore the Aso Ebi because the party was more or less a show of class. Most of the women are big-time textile merchants, and some are upward-mobile career women in top corporate organisations, while others run money-spinning companies. Some of them came from London too.

OTHER families, FRIENDS, CLUBS GIVE SUPPORT

Apart from members of Ogunleye’ family,  who stood solidly behind their son, other group of friends that supported the family were;  RCCG GOSHEN PARISH, NNPC, IKOYI CLUB, ISLAND CLUB AND DBB FAMILY.

One of the dignitaries we can’t fail to mention is Chief Olu Okeowo. He came with his wife to support the celebrator. Other important dignitaries, Kings and Chiefs showed Chief Edward Olajide Ogunleye and family some love on the occasion of his 60th birthday.

READ ALSO: I PICKED UP MY LOVE FOR FASHION FROM MY GRANDMA – LAGOS FASHION DESIGNER, OLAKITAN OLUBI OPENS UP

I Picked Up My Love For Fashion From My Grandma – LAGOS Fashion Designer, OLAKITAN OLUBI Opens Up