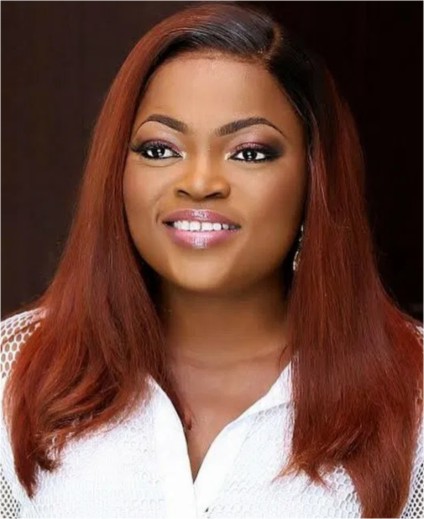 •Talks About Her Omoghetto The Saga

It didn’t come as a shock to many when Funke Akindele’s latest movie “Omoghetto The Saga” emerged not just one of the best movies of 2020 but also the No 1 at the top 10 movies is the cinema which has made close to 200 million naira in less than 2 weeks at the cinema beating all other local and international movies.

Many know Funke Akindele puts in her all and gets the best when she is determined to do something and with her husband JJC Skills by her side, she is indeed ready to conquer not just the movie industry but the world as a whole.

Besides all this success, she is one actress that maintains a very small circle but doesn’t joke with her few friends at all and she has equally touched and inspired a lot of lives positively, while many youths look up to her as their role model.

In the interview, she shared on her Youtube page concerning the hard work and dedication she and her team put into making the movie the huge success it is today.

She stated clearly the role her two close friends, Eniola Badmus and Bimbo Thomas played and why she won’t trade their relationship for anything. According to her “from the film itself, I learnt friendship is key. Sacrifice for friendship is key, two of the lead cast I worked with, that is Eniola Badmus and Bimbo Thomas are my amazing friends, we have been friends for many years, so coming back together to work on this amazing film is great.

It is indeed great to see an amazing movie led by powerful women and most importantly friends, then I saw the energy that was brought on set. It is beautiful.

JJC Skills cuts in I grew up with 8 kids at home, so being on this set with these great ladies makes me feel as if I am just with my family, it is indeed very inspiring (laughs!!!) Yes, we made lots of noise on set.

Yes, because they are friends and have history sometimes so it is very hard to get them to work. They just kept gisting and remembering past issues.

Honestly, I learnt true friendship is key and trust me I won’t trade it for anything.

Recalled in one of Funke Akindele’s Instagram live chat, she also revealed that she has been friends with Bimbo and Eniola for a long time and some years ago while they were filming Omoghetto Part 2 they were robbed. According to her “they had robbed the first wing and one of the robbers who knew I was in the hotel started banging on my door, however, he initially couldn’t break in and Bimbo lifted the bed so I could hide under it, I was frightened but she said, you have to hide because nothing must happen to you. The robber eventually broke in and asked for me, Bimbo did not say a word, then one of the robbers corked his gun but she still did not talk, I came out and begged the robbers not to shoot, while they were punching me, Bimbo kept saying they should leave me alone.

Two days after the robbery, I asked her why she didn’t let the robbers know I was hiding in the bathroom, she said, if they want to kill, it is better we die together”.

Also Eniola Badmus also once revealed Funke brought her into the industry and she has featured in so many movies through Funke before her name got registered in people’s minds. All these explain why they all maintain a very special relationship in the industry.

The two multi-talented actresses played Busty and Nikky – “The Askamaya Ladies” in the movie Omoghetto The Saga.