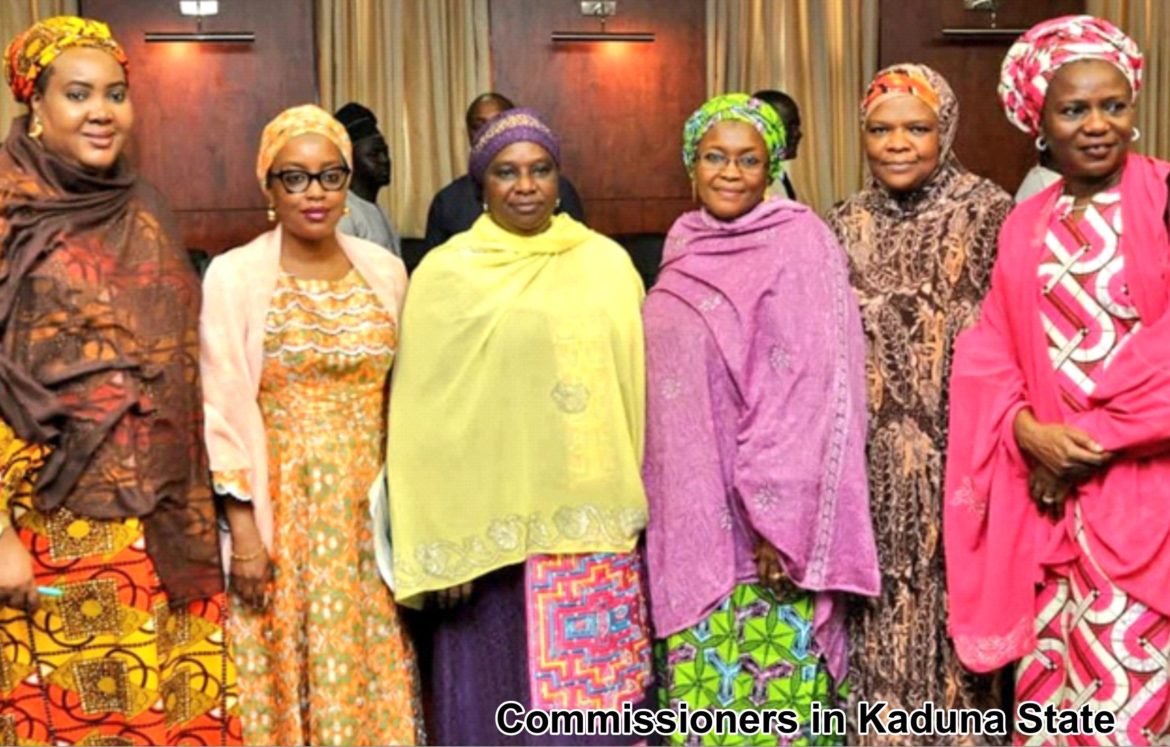 The key reasons of empowering women are to build her self-confidence, exposure and her independence. But there has been discrimination on how society looks at the woman especially in the North. While the woman has also been relegated to the background and “specific roles” reserved for her, forget that, empowering a woman influences her right to make decisions, increases self-confidence and betters her status and role in the household.

But the role of women today seems to be changing radically courtesy of people like Governor Nasir El-Rufai of Kaduna State; whom since 2015 has seen the need to encourage and put more women in Government, and in fact, into position hitherto held exclusively for men. Sources close to the Governor told Citypeople, that El-Rufai believes in unlocking the potentials of women to earn more, gain better jobs so that they can achieve financial independence.

True to his words, El-Rufai has been the only Governor that has encouraged and appointed so many women into his cabinet since the creation of the state. In most public fora where it concerns women, the Governor is quick to stress that encouraging and educating the girl child (women) is very important to him, this is so that they can escape poverty, lead healthier and productive lives, in turn raising the standard of living of their children, families and communities.

No wonder El-Rufai has made education for the girl child in Government Schools free (both primary and secondary schools) this is based on his belief that girl. Education is a strategic development priority. “Better educated women tend to be healthier and participate more in the labor market, earn higher income, marry at a later age and enable better health care and education for their children. They can also make the right choices.

Early this year, Women in Kaduna metropolis appealed to the governor to give women 40% appointment into the State Executive Council, this they say is because the Governor is a women equality advocate who acknowledges the potential of women in nation building.

“We express optimism that our demand would be answered following your administrations promotion of gender equality and women empowerment in the last four years”. They claim his decision to pick a woman as his deputy is a clear indication of his efforts to create a level playing field for women to contribute to the development of the state and also provide the needed opportunity for women to bring their talent to the table for sustainable development in the state.

Ms Hassana Sulaiman, a writer and novelist, said 40% slot, if approved will improve women participation in politics. “Women across the world have held positions and done excellently well. “The decision to give the Deputy Governor’s seat to a woman in Kaduna State was born out of the impressive roles El-Rufai knows women to have performed”.

True to his words, the Governor has continued to appoint more women in Government at the 2nd Women Economic Empowerment Summit, the Governor said his administration appreciates the important role women play in the development of the state and urged them to develop a road map to guide the government in addressing the challenges facing them. He also revealed that the government has established gender desk in all ministries, department and Agencies in the state to address women issues.

Some of the appointments the governor has made which were traditionally held by men was appointing Hadiza Bala Usman as his chief of staff in 2015 when he became Governor. El-Rufai is the first to appoint a woman into such position since the creation of the state.

Hadiza has since left and presently is the Managing Director of Nigerian Ports Authority (NPA). Another appointment he made which surprised a lot of people is that of his deputy Hadiza Sabuwa Balarabe. Hadiza Sabuwa was elected Deputy Governor in May, 2019. Prior to her appointment, there was a 17 years dearth of female deputy governor in the state. Before her appointment she was the executive secretary of Kaduna State Primary Health Care Development Agency. Hadiza a medical doctor by training was also a director of Public Health at FCT. Her appointment is also expected to further expose and encourage medical doctors to go into politics. Other female appointments that El-Rufai has made into “A list” ministries in the state is that of Works and Housing. Hadiza ALiyu Inuwa. She is the first woman to become commissioner for works in the state. She was first appointed in 2015 and reappointment again as Commissioner for Public Works and Infrastructure.

Bariatu Yusuf Mohammed is the States Head of Service (HOS), a position she has held since 2015, Bariatu is a seasoned Civil Servant. Hafsat Muhammed Baba is the commissioner of Human Services and Social Development, she was reappointed after serving as commissioner of Women Affairs and Social Development from 2017 to April 2019. Her new portfolio was expanded to include Human Services, Youth Development, Arts and Culture. Hafsat is a well-established grass root politician.

Umma Yusuf Aboki is the executive secretary of Kaduna Investment Promotion Agency (KADIPA) Umma holds a master’s degree in Finance and Controlling from Swiss Management Centre. The Agency is in charge of making sure all the policies of Government with regard to business and investment promotion of the state are properly carried out.

The Kaduna State Government recently set up an agency called Kaduna Peace Commission saddled with the responsibility of addressing the various ethnic and religious conflicts in the state which is headed by Pricilla Ankut, vice chairman of the commission. Member of the commission are assigned to reduce violence and advocate ideas and programs that affirm diversity, promote peaceful coexistence even in the face of religious or ethnic diversification in the state. Fausat Adebola Ibikunle, the Present Commissioner for Housing and Urban Development is an Architect by training. A graduate of ABU, Hafsat was also the head of Kaduna State Urban Development Authority (KASUPDA) before her recent appointment.

Aisha Dikko, is also the State Commissioner for Justice and Attorney General, before her appointment she was a senior special assistant.

Other women he has appointment into key positions include, Maryam Abubakar, she is the Special Assistant on New Media, a position she has been holding since El-Rufai became Governor in 2015. Maryam is a graduate of University of Abuja and Preston University, Ajman, UAE. She also served in the research unit of the El-Rufai campaign organization.

Nay’marie Musa is the Special Assistant on Political Matters. Aisha Hassan Dogo is S.A Economic Matter’s. Hadiza Hamza also has been appointed Managing Director of the Kaduna State Development Property Company (KSDPC). She was a former General Manager in (KADIPA), while Aisha Saidu Bala is the Director- General of the Kaduna State Transport Regulatory Authority (KSTRA) she is the pioneer head of the Transport Authority. Aisha graduated from Kings College University of London with a degree in Engineering. She headed the team responsible for system tests on the jubilee line extension project of the London underground. She has also worked as a consultant on transport projects in Europe, African and South America.

Meet The New Women Who Will Run LAGOS With Gov. BABAJIDE SANWO-OLU