Meet The New Women Who Will Run LAGOS With Gov. BABAJIDE SANWO-OLU 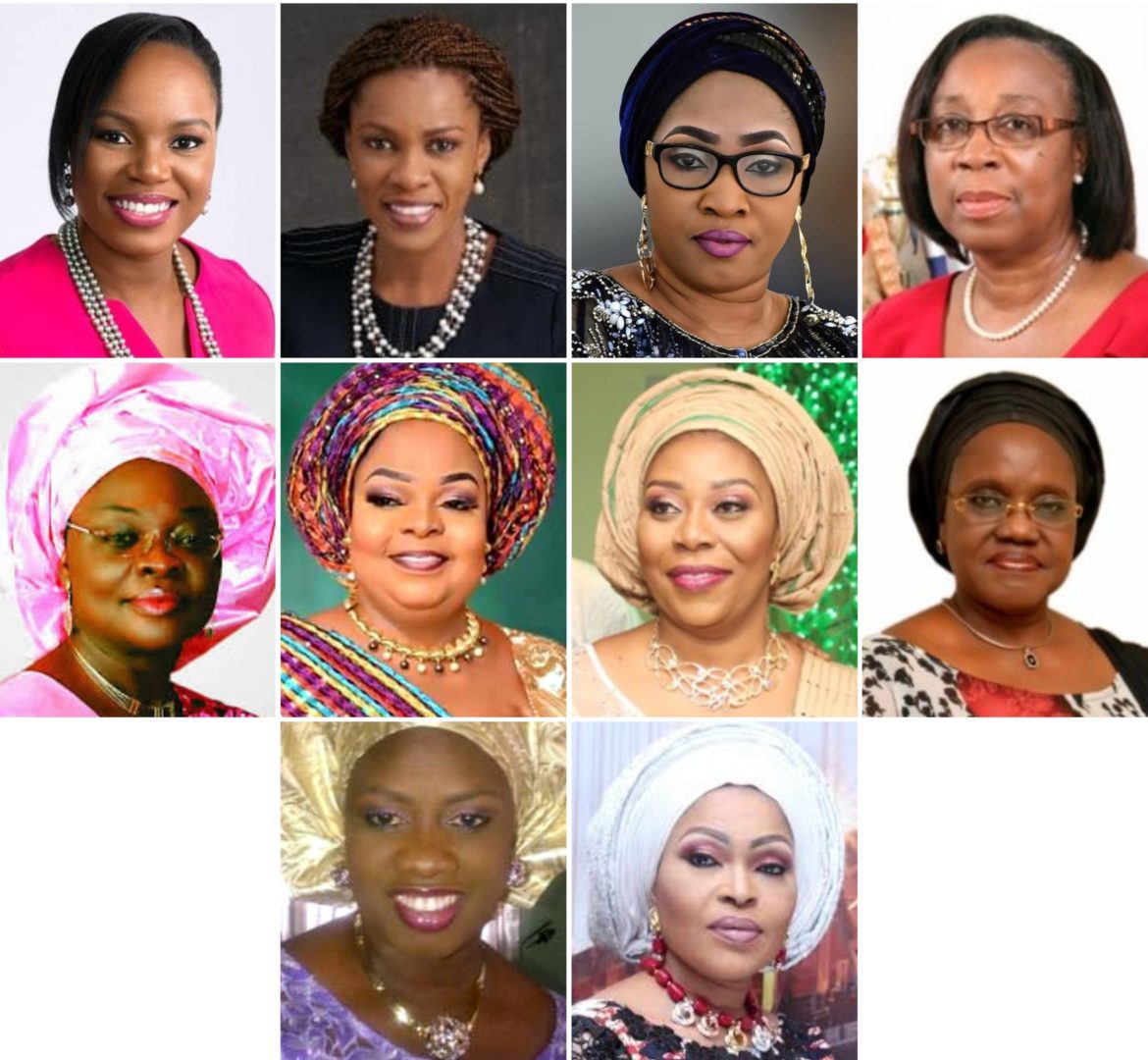 Lagos State government boasts of many women who have risen through the ranks in their professions and hardly will you see any ministry or parastatal or within the executive arm of government that you will not find them. In the last few days, the new Lagos Governor, Babajide Sanwoolu named some of the women who will run his government with him. The confirmed list has 11 women in number. They will be taking up responsibilities as honorable commissioners and Special Advisers.  The 11 women were among the 38 designated commissioners / special advisers screened by the screening committee of Lagos House of Assembly who were sworn in last week. If we add the Secretary to State Government (SSG), Mrs Folashade Sherifat Jaji to the list, it will become 12 women in the cabinet. That certainly will be the largest number of women that will gather in any State Executive Council in the state. The 12 women in the in-coming cabinet, are a combination of the young and old; technocrats and politicians. City People Society Editor, TAYO FAJORIN OYEDIJI presents to you the amazing profile of these women who will run Lagos with Governor Sanwo-Olu.

The secretary to the state government, SSG is a Chemist turned Public Administrator, Mrs. Folashade Sherifat Jaji was born on the 10th March 1957 to both Late Alhaji and Alhaja Amid Akanni Eko. She started her early education at Anglican Girls Primary School, Surulere Lagos, where she obtained the First School Leaving Certificate (FSLC) with Distinction in 1969 before proceeding to Queen’s College, Onike, Yaba for her secondary School Education, passing out in 1974 with the West African School Certificate (WASC) Grade 1 and the Higher School Certificate (HSC) in 1976. She served as the Deputy Head Girl in her set. Thereafter, she attended the University of Ibadan from where she obtained a Bachelor of Science (B.Sc. Hons.) Degree in Chemistry in 1979. Subsequently, she served with the Nigerian Breweries for her National Youth Service Corp (NYSC). In 1985, she bagged the Post Graduate Diploma in Public Administration (PGDPA) from the Administrative Staff College of Nigeria (ASCON), Topo, Badagry and also earned a Master of Business Administration (MBA) degree from the University of Lagos, Akoka in 1989.

Miss Ruth Abisola Olusanya is the Special Adviser on Agriculture. She is the daughter of Asipa Kaoli Olusanya, the Vice Chairman of APC, Lagos . She is 36 years old and holds BSc Architecture from University of Lagos and MBA from Lagos Business School. She has been working for Olams International, Ghana since 2009.

Mrs Bolaji Cecilia Dada is a politician and a former Executive Secretary of Apapa Local Government Council. She is the new commissioner for Women Affairs and Poverty Alleviation. She was born on 9th of July, 1966. She holds a BSc in Chemistry and MSc in Corporate Governance. She left the corporate world for politics in her desire to contribute to good governance. Amiable and articulate Hon.(Mrs.)Bolaji Cecilia Dada until her recent appointment was the Vice-Chairman of Apapa Local Government; a position she is holding for the second time. She is a 1991 Lagos State University graduate of Industrial Chemistry with a Masters in Corporate Governance from the Leeds Metropolitan University, United Kingdom.

Mrs Folashade Omobola Adefisayo is the new commissioner for Education. She was born on the 13th of November 1957. She holds BSc in Zoology from University of Ibadan and MBA from University of Lagos, PGC Education from University of Nottingham, MA Education from the same University in 2015. Folasade Adefisayo, B.Sc, MBA, IPGCE, M.Ed. retired in 2014 from the services of the Corona Schools Trust Council after 13 years of service. She was the CEO of The Trust and in her last four years was a consultant and Director of the Corona Secondary School. She is presently an educational consultant engaged in providing broad-based education consulting ranging from school transformation, teacher recruitment and training, school set up and management, school and NGO board development and school operations management. She has over 35 years working experience spanning banking operations, Trade Finance, Organizational Restructuring, Human Resource Management, Training and Treasury Management. She is dedicated to improving other people’s lives and has served as a volunteer to many NGOs – Society for the Blind, Volunteer Corps, Oando Foundation, Teach for Nigeria, SWORTE Talks among others. Folasade serves on the governing boards of four schools and five not for profits engaged in youth and education. Folasade’s greatest passion is for education, particularly education for the poor and she has consulted and served organisations concerned with mass education such as the NESG, DFID and DEEPEN. She has also consulted for state governments and a number of schools. She has worked United Bank for Africa, Everest Finance Company, Comet Merchant Bank Ltd , Tetra Pak ( West Africa) Ltd and Chairman Corona Schools Trust Council.

Mrs Ajibola Ponle is the commissioner for Establishment, Trainings and Pension. She was born on the 9th of September 1973. She holds BSc Economics from university of Ibadan and MSc Organisational Psycology from University of London. Mrs Ponnle is a consultant, executive coach and organisational psychologist. With a professional background as a chartered accountant and chartered tax practitioner, she has over 22 years’ experience in various fields ranging from finance, human resource consultancy, instructional design and coaching.   She has worked with companies such as Arthur Andersen (now KPMG International) and British American Tobacco as one of the founding pre-merger staff.  Ajibola established Team Building Africa ‘TBA’ Consultancy in 2007, the regional representative of Team Building USA where, until her appointment at CIPM, she was the chief executive officer. She is an adjunct faculty member of the Executive Management Programme at Lagos Business School and also the founder of the Centre for Core Coaching. She is the pioneer Nigeria Chapter President of International Coach Federation (ICF) and the first Nigerian to earn the Professional Certified Coach (PCC) accreditation.  In recognition of her contribution to the development of professional coaching in the region, she was selected as one of five founding members of the Executive Coaching Advisory Board for Africa, an initiative to stimulate the professional coaching industry in Sub-Saharan Africa. She was the Registrar/Chief Executive Officer of Chartered Institute of Personnel Management Nigeria until her recent appointment. She had been the Head, Marketing Finance at British American Tobacco.

Mrs Uzamat Akinbile – Yusuf is the commissioner for Home Affairs. She was born on May 25, 1974. She holds B. Pharm from University of Lagos. She was the commissioner for Youth and Social Development and later Job Creation and Employment in the last administration. For pharmacist-turned-politician, Princess Uzamat Folasayo Akinbile-Yusuf, she is fondly called with the Moniker-Moremi of Alimosho. It will be recalled that Akinbile-Yusuf made a fruitless attempt to represent the Alimosho Constituency 01 in the Lagos State House of Assembly in 2011 on the platform of the defunct Action Congress of Nigeria (ACN). She was later appointed the Supervisory Councillor for Agric and Social Development in Agbado/Oke Odo LCDA. She had her primary education at Ansar-Ud-Deen Primary School, Ile Ife between 1980-1986. On completion she gained admission into the Seventh Day Adventist Grammar school; Ile Ife between 1987-1992 after which she was admitted to University of Lagos, Akoka, Lagos for her B.Pharm graduating in the year 2006.Pharm. Uzamat is a successful business woman who started early in life in Ile-Ife under the tutelage of her mother to eventually own a conglomerate consisting of Musaroq Nig. Ltd, Beta Silver Crown Ltd, Musaroq Pharmaceuticals, just to mention a few.

In politics like in the flourishing business she left behind she quickly made remarkable impact as an active member of the All Progressive Congress of Nigeria from inception till date. Where, as Supervisory Councillor, Agriculture, Rural and Social Development in Agbado/Oke-Odo between 2012-2014 she took positive advantage of her position to benefit different CDAs, Sportsmen and Women.

Mrs Adetoke Benson –Awoyinka is the special adviser on housing. She was born in June 12, 1967 to the popular Sobowale Benson of Ikorodu. She holds LL.B and B.L and  has been consultancy in Law,Oil and Gas law both in Nigeria and United States of America.She is also a politician and the Assistant Legal Adviser of APC , Lagos.

Mrs Folashade Aderemi Adebowale- Owoeye is the new special adviser on Civic Engagement. She is the daughter of the popular Adebowale family from Epe. She was born in August 10, 1966. A registered nurse who holds a BSc in Political Science / Education, MSc  Public Health, she had been a Sole Administrator of Iru Victoria Island LCDA.

Otunba (Mrs) Yetunde Christiana Arobieke is the former two terms Chairperson and two terms Executive Secretary of Agboyi /Ketu LCDA. She is presently the Commissioner for Local Government and community affairs. She was born in May 6, 1960. She holds a BSc in Political Science from University of Ibadan and MPA from Lagos State University, Ojo.

Mrs Oluwasolape Hammond is the new Special Adviser on sustainable development goals. She is the daughter of Late Dr Olusegun Agagu, the former Ondo State governor. She was born in December 18, 1977. She holds BSc in Economics from University of Ibadan and MBA from INSEAD . She had worked at moribund MBC International Bank Ltd , Accenture, as Manager ( Finance &Performance Management). She was once Director & Lead Consultant, Ten Talents Limited. She is also the Co -Founder and CEO Impart Hub Lagos.

Shulamite Olufunke Adebolu is the commissioner for Tourism, Art and Culture. She was born on April 8, 1973. She holds a LLB Hons Law from University of  Hertfordshire. BL from Law School – College of Law Guildford. She is an Associate Director, PWC Management Consultant. She had worked in the Prime Ministerial Delivery Unit, United Kingdom during the tenure of Mr. Tony Blair. She had also worked with several state governments and Federal Government of Nigeria.

Hon (Mrs) Subulola Fibisola Akande, the immediate elder sister of Senator Oluremi Tinubu and a two term member of Lagos House of Assembly from 2007  – 2015. She is the new Commissioner for commerce and industry. She was also the immediate past Commissioner for Women Affairs and Poverty Alleviation. The Commissioner for women affairs is a product of Queen’s School, Ibadan, she holds a Master’s Degree in Public Administration (MPA) with specialization in Public Policy from University of Lagos and also, a Post Graduate Diploma in Education (PGDE) from the same institution, having earlier obtained a BSc. (Hons) in Botany) from the prestigious University Of Ife (now Obafemi  Awolowo University ), Osun State. A political icon, she was before her current appointment as the Commissioner for Women Affairs Poverty Alleviation, the Deputy Majority Leader of the 7th Lagos State House of Assembly having previously held the position of the Deputy Chief Whip of the same House representing Ikeja Constituency 11. Conversely, before these positions she was actively involved in different political activities and held both elective and appointed portfolios at various periods. She was a Chairmanship aspirant for Ikeja Local Government on the platform of the then Social Democratic Party (SDP); Secretary, Justice Forum Ikeja Local Government ; Ex- officio member (UNCP) Ikeja Local Government and elected member of Lagos State House of Assembly 2007, as well as, Board member of Lagos State Traffic Management Authority 2007 amongst others.Nevertheless, Hon. Lola Akande’s working experience started in 1983 when she observed her mandatory National Youth Service Corp with Cadbury Nigeria Limited Ikeja, in the Technical Service Department. However, after completion of her NYSC in 1984, Hon. Lola Akande joined Lagos State Teaching Service Commission in 1985 and taught till 1991. From 1991 till date she worked as the chairman of Fibsol Ent. She was born on January 2, 1959.

Meet The New Women Who Will Run LAGOS With Gov. BABAJIDE SANWO-OLU was last modified: August 26th, 2019 by Tayo Oyediji