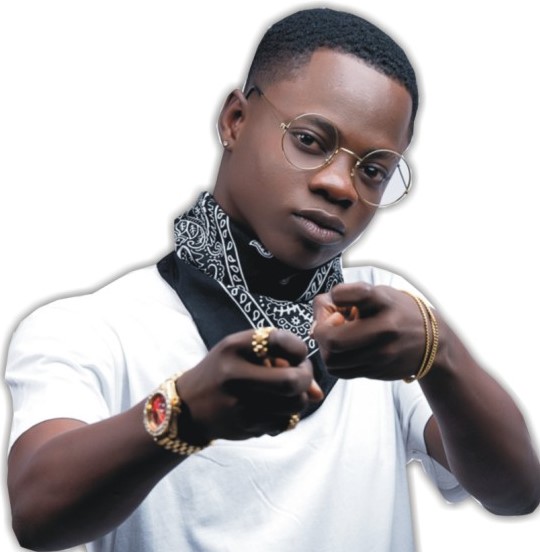 They call him Trod, but his real name is Olanipekun Olatubosun David. Trod is the younger brother of the late Naija king of rap, Oladapo Olaitan Olanipekun, popularly called Dagrin. You don’t need to be told that Trod is Dagrin’s brother because he shares look with his brother. He also talks like him.

Trod has been doing music for over 6 years, though he is not in any record label yet, on the label, his brother left behind Miso Funyin Entertainment. He recently featured Lyta; one of Ybnl big boys in one of his new tracks and it has gained massive air-play, in and outside Lagos. Last week, he was at the City People’s Head office in Lagos and was interviewed by City People’s Senior Editor, WALE LAWAL and City People’s Entertainment Reporter, PRECIOUS POMAA, on his foray into music and how it all started for him.

What would you say inspired your song E Go Be?

Actually, the song wasn’t planned for. I met Lyta in the studio and we had a beat already, so I asked him if we could do a song together because Ramadan was around the corner; a song that could touch people and keep inspiring them. Lyta came up with a chorus which is E Go Be and it happened to be a regular slang.

How has the reception been so far?

I dropped the song some days ago and a lot of people like it and they say this is my best collaboration this year. It has really inspired a lot of people and so many people say they listen to it first thing in the morning when they wake up.

Music started like the normal praise and worship in the morning. To be sincere, I never knew I was going to be an artiste, but when it came, I had to take it in. My late brother also inspired my music life because I took a little bit of his style of music. People usually say I went into music because of him, but that’s not true. The main reason I went into music was that I love rap music.

How long have you been in music?

I have been into music for the past 5 to 6 years and the response from fans has been amazing.

Did you start off as a rap artiste?

Yes, I did. I am an indigenous rapper. From now till the last day, even though right now in Nigeria you can’t do just rap, but add a little bit of lyric to it just to woo the Nigerian market.

I was born in Alagbadofrom a family of 9. I was born on the 1st of August, 1996. I am a Muslim and at the same time, a Christian because my dad is a Christian, while my mom is a Muslim. So, I fell in love with both. I am currently in university.

So, how do you juggle between school and music because both need a lot of your time?

When you talk about the music you need fans and you get the fans from the street, but I have grown to know that the real fans are students. I play from school to schools to let them get familiar with my song. so I started with free-styling on the school stage and then to Instagram and I was getting a lot of views on the videos and that was how people started asking up and down whom I was and saying that I was good. My fan based was not just Nigeria, but even outside Nigeria. People saying I sound like Dagrin. That was how the real link-up started and we moved from one place to another.

Are you on any label for now?

Well not really I am running solo for now, but I am using the record label my brother was using back then, Missfunyin Entertainment because I don’t want the legacy to go away, so I am still using it up till date just to keep the legacy going.

Who will you say are the artistes who inspired you?

Back then, it was 2pac and Biggie, but right now when you talk about the new school it’s Olamide, Reminisce, Wizkid, Davido, Burna-boy, Ice Prince, Lyta. I have listened to a lot of them, and you need to listen to a lot of them to make it to the top. A lot of them inspired me.

So, your style of songs reminds people of Dagrin and you never mentioned him in your song?

Yeah, the truth is that I just let my fans feel it. I might not mention him, but no matter how you listen to my song, you will feel a bit of Dagrin.

You said, you had no plans of doing music, but how did music come to you?

Back then, our parents never wanted us to do music, but Dagrin still stood by himself that he wanted to do music. When Dagrin was doing music, I was still in secondary school. I never had my own song then, I just went on stage to freestyle on beats. So, later on, everything happened, and no one was able to choose for me anymore and I felt it was my time and I decided to go out there and show the world what I have in store.

So, right now, your parents are cool with your music?

Yes they are. They don’t even have a choice.

Tell us about you previous projects?

I have dropped a couple of videos. I have 9 tracks apart from E Go Be. I have dropped 8 tracks solo so far. I am a creative hip pop artiste who’s trying to put the best lyrics out there. Most of the songs people listen to are ‘popping songs’, but we still have people who need songs to inspire them. Although, I am not saying it’s bad to dance away your sorrow, but after all the party you will need something to fall back on.  I just try to pass a message to people with my songs.

Why have you chosen to do something that’s very serious and not go commercial?

When you look at the history of rap, all of them put out moral lessons you can learn from. If you don’t know, you should know now that music is more than what we are listing to right now. When you listen to 2pac, Biggie and the rest of them, you will feel the message they are passing out. Sorry to say, but I am not following the trend; I am just doing what I love to do and make people sit down and listen to my song and feel the reality.

Where do you see Trod in a few years from now?

It’s only God that knows for now.

Which of your songs will you say shot you to limelight?

I would say it’s the song with Lyta because people have been expecting a collaboration with an artiste for a long while. People have been asking why I have not worked with all the big acts despite my late brother’s influence.

So, tell us how do you get inspiration to write your lyrics?

I have different inspirations to write songs, it actually depends if I am happy or sad; my mood matters. I can write at any time. My inspiration comes from my feeling at the moment and any beat I hear I tell a story with it already in my head. So, I just take my headset and go to an air-free environment and write.

READ ALSO: HOW WE HAVE IMPROVED ISLAND CLUB IN THE PAST 2 YRS – CHAIRMAN, OLABANJI OLADAPO

How I Adopted Late DAGRIN’s Style Of Music – DAGRIN’s Younger Brother, TROD was last modified: May 10th, 2019 by City People