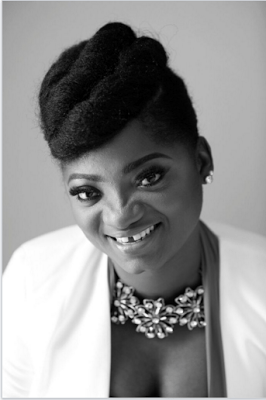 Everyone calls her Olori Supergal online, but her real name is Oluwatosin Ajibade. She is one of the most respected and credible voices in the new media today. Below she tells her story of how she has dealt with the challenges of being a young entrepreneur in Nigeria and growing her business from cyber cafes to one that employs dozens of young Nigerians and is the preferred some of entertainment news in Nigeria today.

I have always believed having a day job is not the worst thing in the world. However, it does not hurt to discover other things you are good at. Most day jobs rarely provide the kind of long-term satisfaction and fulfillment that a simple hobby can.

I have attended my fair share of conferences and seminars and I find that most of the speakers at such events have the same basic failing: they provide a brief background of themselves and the super-duper idea that catapulted them in their field. There is never any real information as to the practical tools you need to succeed and they never quite tell you how difficult the road is and how you will doubt yourself and sometimes ask yourself if it is all worth it.

It is rarely as rosy and easy as people make it out to be. Half the time, success tends to be the summation of a life process rather than one single life choice.

There are countless seminars on Entrepreneurship, with tons of specialists promising to teach trade secrets on private enterprise. However, the truth about starting and succeeding at a business is much less exciting, and having a great idea is no guarantee of success.

Some of the best thinkers in the world have been unable to turn their best ideas into successes. A few years ago, a somewhat scary statistic proclaimed that 75% of start-ups fail within the first 3 years of establishment.

There are many perspectives through which we can look at the failure of these ventures. The most obvious is to point out that Nigeria is one of the most difficult places in the world to do business. However, the true story is a bit more complex. As I have come to discover, businesses require a lot more than passion and drive. They require a long-term commitment to a vision that will often prove difficult to achieve.

Nonetheless, it is not altogether a tale of gloom.

There are as many success stories as there are depressing stories, with lots of lessons from either side of the divide. Social media has ensured that what would have been termed unconventional ideas many years ago are businesses which are worth millions today.

One Nigerian example of this is of course the Twitter Premier League, a seemingly simple idea which began from a shared love of football for users of Twitter. Fast forward to 3 years later and it was without doubt one of the best organised events in Nigeria.

The Humans of New York photoblog is a modern internet sensation, sharing stories from all over the world and connecting people in ways that have never been done before. Started by Brandon Stanton in 2010, the poignant photographs of people as well as their candid, touching stories have raised awareness of issues outside of our immediate environment.

Charitable service to humanity is richer for social media too, with platforms such as GofundMe helping humanitarian causes. In 2016, the Mirabel Centre, one of the few rape test centres in Lagos, raised funds to the tune of $5,000 dollars online after it announced it was due to stop receiving funding from the Department for International Development (DfID).

Without a doubt, social media has changed our world forever.

Have you ever thought of spending your life – 10 to 18 hours a day – on the internet? If anyone had said, “Olori, I predict you will be spending 18 hours online every day”, I would have replied, “It’s a lie.”

When I started social media campaigns in 2008 using Facebook, I never thought that my life would change so much. I was just a front desk officer and I had only my Nokia phone. I am passionate about having current information, and at that time, I always shared information on Facebook. Soon, I had a large following and when I reached the 5,000 friend limit in 2009, I contemplated whether to open a Facebook page or not. I eventually opted for opening a second account to extend my engagement to a larger following instead of opening a page.

Then I was not sure what I needed a page for.

By 2011, friends on Facebook had convinced me, and I opened a fan page. Meanwhile, I had opened my first Twitter account on 29th August 2009. My first tweet was, “I’m going for a live show soon @ ultima studio ….. catcha ya lera.”

Twitter was quite difficult for me to understand at that time, and since I was following @Exschoolnerd, I started to observe how she got her tweets right and how she was coping with the 140-character limit. I had been following her on Facebook, so she was someone I could relate with. Meanwhile, I was spending about seven hours daily on Facebook.

Twitter was like when I wrote JAMB for the first time in SS 2. It was that difficult for me to understand.

It took me weeks to grasp what it was all about and how “trends” worked. I spent so much time and money on the internet every month. I made more and more online friends who saw me as a source for the right information and I made sure they were not misled. They were my “voltrons”; if anyone attacked me.online, they stood up for me. I’m used to it all now, but it was quite the big deal for me then. They believed every message I passed across and I, on my part, always made sure I verified the authenticity of all my posts. Integrity is essential in this business and it was something I learnt on my own.

My social media skills landed me a job at Ayeni Adekunle’s BlackHouse Media (BHM) in 2009. I was hired as a Social Media Manager for both BHM, which is a PR company, and their online media platform, Thenet. ng. Before long, I was attending a lot of red carpet events and concerts, and handling interviews with celebrities.

BHM was the last regular job I had.

As I spent more time and money on the internet, even my parents started to wonder what I was doing online. Some people thought I was into Yahoo business.

The amount of time I spent at the cybercafe seemed to lend credence to that impression. I was through with school and no one knew what exactly I did. I was spending more than ten hours in cybercafes. I became a regular customer. I would be there before they opened up sometimes and the last to leave.

I got regular discounts, paying N500 or N600 for ten hours instead of N100 per hour. I would sit down and only get up to maybe drink water, buy food or use the re-stroom and come back to that same spot. I usually made sure that whatever system I was using was connected to a UPS so even if NEPA took light, I was not cut off I was not making money back then. I did not even know I could make money from what I did. My mum was funding my activities to a large extent. When I needed money, I could always go to her for a loan.

I knew I had to stop going to cybercafes because I was getting harassed by boys coming into the cafe. They were suspicious of me and it became a problem. I knew I had to save and get a personal laptop.

READ ALSO: WHAT MANY DON’T KNOW ABOUT THE REAL JIMI AGBAJE