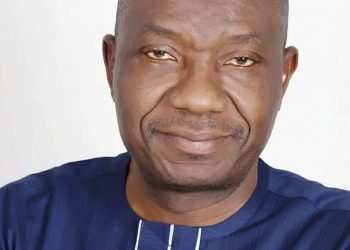 Barr. Obafemi Adewale, popularly known as OBAF, hails from Ijurin- Ekiti in Ijero Local Government of Ekiti State. He attended Christ’s School, Ado Ekiti,  before he proceeded to Obafemi Awolowo University, Ile-Ife, Osun state (University of Ile-Ife), where he studied law. He is an eloquent speaker and a renowned lawyer. This legal icon turned politician was a former Secretary General of the Nigerian Bar Association and a member, Pioneer Governing Council of the National Human Rights Commission (NHRC). He was Ekiti State former Attorney General and Commissioner for Justice during Otunba Niyi Adebayo administration. He also served as Works Commissioner and Special Adviser on political matters to Ekiti State Governor during Engr. Segun Oni’s administration. He was voted 3rd best delegate out of over 360 delegates from all over Nigeria in the 1994 /95 Constitutional Conference (CONFAB). Last week, City People’s Adeola Shittu was at his GRA residence in Ado Ekiti, where OBAF, a philanthropist, opened up on his senatorial race and how he planned to defeat Hon Opeyemi Bamidele, APC’s candidate, among other issues.

What motivated you to go into politics?

In the early 80’s, I was in Lagos as a young lawyer and I used to travel maybe once or twice in a month to see my parents at home.  Every time that I came to Ekiti, people would always come round and each time people would pray for me, I appreciated them in my little way and they appreciated it. Over the years, it became real that poverty has become endemic in our society. So, when the opportunity came on the creations of Ekiti state, I decided to run for the position of the number 1 citizen of Ekiti state because I felt that was the only way we could do something for the benefit of the people. I taught if we could  have God-fearing and compassionate people in government, our people would  be the better for it. I was at the Constitutional Conference in 1994/ 1995 where we made the case for the creation of Ekiti state and some of the things they said against us was that we lack resources to sustain the state. They wanted to know how we would survive. We don’t have oil, we don’t have access to the sea, we don’t have rail line  I told them we have people. We have fertile land and our treasure is compact, it’s very small and easy to manage and our people are resourceful, we can survive. Today, I’m happy that we got Ekiti state. I’m happy that we have been able to promote that Ekiti identity and what we have next now is to harness the energy of our people and make them live a better life, so that is why it is important to just uplift the standard of living of our people through provision of  needs like housing, education, healthcare and food security, which are  very important. (Yoruba adage says, ti a bi ba wonu, oro mi ko ki wo” you will agree with me that it is not in Yoruba culture to beg. They feel that when you beg you are a beggar. Back then, even stealing was never part of culture back then. Farmers used to  display their goods at the roadside and the buyers would  buy it in their absent and drop the money there. That was why we are called state of honour, but of late, people now do a lot of things just to make ends need and there are basic needs. That is why I’m saying, it does not have to be so. It’s a question of leadership. It’s a question of people, who care enough to say, yes I have enough what about people who don’t and you are ready to share with them. That was what motivated me to contest for governor when the state was created in 1996, but I contested in 1997/98 on the platform of UNDP and when Abacha died, we regrouped and I joined the AD.

I was born into politics; My late father was a politician. I remember my earliest service as a young staffer of people outside my immediate family are politicians. People like, Late Chief Omoboriowo, Senator Ayo Fasanmi, among others. My father was in the university during that period. He was in the University of Ibadan. He was the National Chairman of Action Group Youth Congress (AGYC). He used to come from the university (University of Ibadan) to Ekiti during the general elections in 1964-1965 during the crisis. Whenever he was home, people always came. They were the first set of people whom I met. And when the crisis started, that time my father completed his course in the university in July 1965 and went back to his teaching employment in Ayede Grammar School, Ayede Ekiti. So, I spent my first 17 years of my life at Ayede Ekiti because that was where my father was teaching before he went to the university and also went back there when he finished his schooling. By that time, the crisis started, for days, we might not see my dad at home. That time my father exposed us to early reading of newspapers, listening to the radio, reading features and I was very up to date and knew what was going on.  So I can confidently say that I was born into politics. It did not come to me by accident or by chance.

What year did you see politics as part of you. What year?

I will say because of my upbringing, it has always been part of me. In primary school, we may not call that politics, but I was very active because I was in charge of the library from my primary 4 up to primary 6, I managed the school, library and I was very prominent in my primary school maybe because my primary school was directly opposite my the secondary school where my father was teaching. So, I was already into organisation from primary school and in secondary school too I attended the famous Christ school, Ado Ekiti and we did a lot of things. I was a student activist in the University of Ile (Obafemi Awolowo University). I even ran for the secretaryship of the S.U.G in my third year. So, I will say it has been there all the while and even after my graduation  as a lawyer, I became very active in the Nigeria Bar Association (NBA) at a very early age. By the time I was two year at the Bar I was already the secretary of a branch. By the time I was four years at the Bar, I was invited to run for a national office, but my Oga then said  it was too early. At five years at the Bar, I was already my own boss, set up my office. I was invited again and I ran and was selected the second assistant secretary. Nigeria Bar Association the same year that Bola Ajibola became our president and I was privileged to serve under him, Later, Ajibola became a judge at the International Court of Justices. So, by 1990, at exactly 10 years at the Bar, I contested for the general secretary office of the association at the national level, won and served for 3 years, so I will say it had always been there.

Why are you aspiring for a Senate seat?

My aspiration for a  Senate seat did not start today. It has always been there. It is borne out of the desire to serve my people and give them a good representation at the National Assembly. This is in terms of making useful, cogent and relevant input into lawmaking to lift the standard of living of our people and the rest of Nigerians. Ekiti State is a small state, a landlocked state, with so many disadvantages, but luckily, God has given us people who are very resourceful. All you need is good leadership and opportunities to fulfill their potential. And I believe that with the little experience that I have gathered in my 38 years of active legal practice, I will make positive impact. Having been privileged in a way, I think the least I can do is to give back to my people in terms of service. There is no gainsaying that poverty is the greatest threat to democracy in Nigeria today. We all must join hands to fight poverty, if we want democracy to thrive.

Going by your background, your family’s influence and everything, will you say Obafemi Adewale is a grassroots politician?

Have always been there at the grassroots, I challenge you to go anywhere in this environment, anywhere in Ekiti state, any place in Ekiti and mention the name Obafemi Adewale, I think that is the only way I can describe it because it’s been part of me.

You are the PDP candidate for Ekiti Central senatorial district and in a couple of days, February 16 precisely, the election will be held. You are in the race with over 10 other candidates of which APC’s candidate, Hon Opeyemi Bamidele, is one of them. Do you see him as a threat to you?

In any political contest, your opponent is a threat to your success. So, it will be a presumption for you to say your opponent is not a threat. Your opponent is the one standing between you and your victory. If you underestimate your opponent, you might be unpleasantly surprised. So, it is always better to acknowledge that your opponent is a threat. But it is very simple if you do your threat analysis. What are your strength, what are his strength, what are your weakness, what are his weakness, what are the opportunities available for both of you. As far as I’m concerned in Ekiti central senatorial districts, by whatever analysis or criteria, the PDP is very much on ground. Infact, Ekiti central is the strong hold of PDP in Ekiti state. Take it or leave it,  Ekiti state is a PDP state and there is no magic or big deal in my opponent belonging to the ruling party. We had election in July we are in the ruling party but the INEC announced APC’s candidate as a winner. Look at the election of US President Donald Trump. He won the election to defect the ruling party, so there is nothing scaring or significant about running against the ruling party, but the most important things is to know what is the situation in your senatorial district and what you have to do to win the election. I can tell you today that Ekiti is very ready for PDP to come back and by the grace of God, come February 16, I will win the election.

I Am The Best Candidate For EKITI Central Senate Seat was last modified: February 11th, 2019 by Adeola Shittu