Home News How I Fell In Love And Married My Wife – US Businessman, BABATUNDE BASHORUN
News

How I Fell In Love And Married My Wife – US Businessman, BABATUNDE BASHORUN 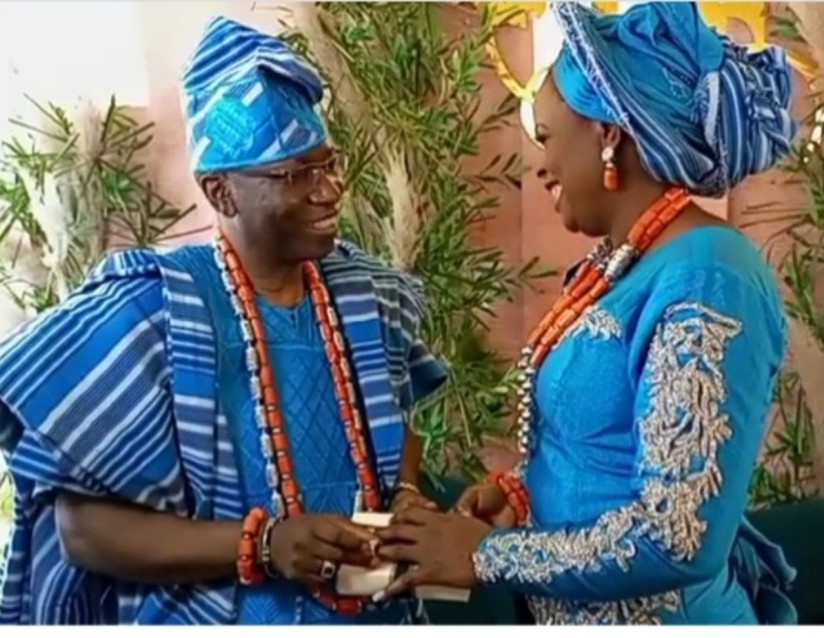 A few days ago, (US) based businessman, Mr Babatunde Bashorun and his bride, Fadekemi Adedeji, got married in the most epic and lavish ceremony held at Alausa, Lagos State. Classic Event Centre became busy at exactly 6 am in the morning as all vendors appointed by B Signature Events began to troop in.

Ball Events took charge of the event, as the decorators got busy with the Engagement segment, which was to be held outside the hall. The second part of the decorator’s team got busy beautifying the main hall. Food vendors ranging from Amala Toh Sure, Drinks Division, Palm Wine and Pepper Soup, Oriental dishes and others got busy at the back of the hall. The engagement section was beautified with the trending #becomingthebashoruns and signatures of the hashtag, the “Eru Iyawo” was also beautifully arranged by the “Alaga Iduro” Ile Oko ya and her team. Guests began to arrive at 9 am as the bride’s mother Chief Mrs. Felicia Adeniji was first to come into the engagement ground.

She was spotted dressed in a shining gold lace material with matching gold ‘’Gele’’ with matching jewellery and a fluffy horsetail in her hand. She danced in with ‘’Ile Oko ya’’ dishing out her songs in her dialect, while the drummers accompanied her songs, with beautiful tunes. The Groom’s mother Mrs. Adunni Bashorun came in next dressed in matching clothing as the bride’s parent as she danced in with her family members.  The groom came next dressed in the most elegant green ‘’Aso Oke’’ made into “Agbada” and “Sokoto”, he also had on the beads of royals and danced in with the “Ake Wi” singing the praises of a true Oyo Prince. Mr. Babatunde Bashorun danced in gallantly to the chants going towards his in-laws to receive their blessings before going to his parents for their blessings. to take his wife. As this ended, with smiles and joy the conjugal letters were exchanged as the “Ake Wi” prepared the bride by singing her songs of praise from Ilesha. The bride’s train formed a long-like dress in the indigenous “Aso Oke” sewn into “Oleku” style with the matching “Gele”. After the train, two young energetic traditional dancers also took their turn as people became more anxious to see the bride.

Finally, the bride stepped out in a green “Oso oke” with matching ‘’Gele’’ and jewellery. She danced towards the waiting guests taking steps in commemoration of her beloved culture. She danced towards her parents for their blessings before going to her in-laws veiled to get their blessings.  After this, Fadekemi Adedeji was accompanied by ‘’Ile Oko ya’’ to pick a favourite item from the gifts presented by her husband and his family. After picking the Bible, she was accompanied to seat by her husband. The exchange of rings came next after which a beautiful wedding cake was cut to start their new journey as Mr and Mrs Bashorun.

As this marked the end of the Engagement party, all friends and guests headed to different places to change in to green lace and ‘’gele’’ for the women while men had on white or green Senator materials and caps. The cocktail hour had P4 String Quartet and his crew playing classical music with their violins as guests walked into freshly-made cocktails and finger foods. Guests took their turn to talk about the bride and groom before going into the hall to enjoy the rest of the evening.

Dr Smile took up the microphone to announce the arrival of the bride’s family as the Shuga band sang a different mix of juju music.  The Groom’s parents also danced in accompanied by friends and family members as they took their seats. Finally, Mr Babatunde Bashorun and Mrs Fadekemi Bashorun danced in looking elegant. Mrs Fadekemi Bashorun had the most elegant fairy tale wedding dress as Mr Bashorun had on a nice and sharp suit on. They danced to their beautifully decorated seats on the stage as guests struggled to have a look at the newly wedded. Dr Smile called on Professor Ahmed as the chairman of the day. Professor Ahmed said a few prayers and advised the new couple on their new journey as man and wife. The couple then took to the dance floor to share their first dance. After this, Dr Smile called the couple to the cake stand and organised the cake-cutting ritual. Mr Babatunde took the stage to give the vote of thanks as he shared his joy in the attendance of his ceremony. Immediately, the couple went to change into a beautiful white ‘’Aso Ebi’’ dancing on to enjoy the after-party as the hypeman took over the role of MC  and DJ Jay Next also started playing hip hop music. The couple once again hit the dance floor with their friends and families. Mr Babatunde then told the media how he met his wife Mrs Fadekemi Bashorun. Read excerpts below:

I am Babatunde Bashorun and I reside in New Jersey in the United States. Our love journey started on what I believe to be an ordination “A situation of what is meant to be”, owing to cumulative events at a late summer party. One August; I was invited to a party, I hardly attended parties, but the person always wanted me to go to a party with her.  This particular person and I share a mutual respect for each other. She would always seek my companionship at parties many of which I did not attend, owing to reason beyond my control. This particular event, I happened to be the one who kept reminding her of it because I was more anxious to attend the party that has now changed our narratives forever. I attended the party and it was a birthday party, stepping in there, I was really captivated by her celestial posture as she stood there with no prior knowledge of her except that she was nice. Then her mother got up and started telling stories about my wife’s life who was the celebrator. She was narrating how much of a pillar she had been to her family. How she raised members of the family after her father’s death. I saw a lot of connections between my wife’s family and mine. The love, determination and focus of the family to be different. I remembered how my friend while attending the party, described an extremely humble individual and her husband in Nigeria and she will be grateful to the couple (un-knowing to him that the couple had broken up). Hence I did not go to the party for any other reason than to enjoy the evening, but God had a different plan for us. At the event, everyone exchanged turns to dance with the celebrant while I observed the formation and calibre of the invitees. I excused myself to the men’s room and my friend was already on the dance floor with the celebrator so I continued to enjoy my food and drink while thinking that being on the dance floor was not meant to be, as my friend even had already left me. Nonetheless, for reasons I still struggle to understand to date, I got up to walk to the dance floor where there was no one but the celebrator and myself so we just got into the grove dancing even when the music had stopped. Strange enough, out of my character, I proceeded to shower money on her till I parted with the last currency note. All the while, there was no interest expressed by neither of us. As the night progressed, I became curious as to where the husband was and that was when I inquired from my friend. She, in turn, asked her little sister (as she referred to the celebrator) and alas…. My wife was born.  My wife is a lovely person, humble and generous and that was how we kicked it off. From the day I met her until date, I have all reasons to be thankful. God says whoever finds a wife, finds a good thing and this is well taken and blessed by God.

How I Fell In Love And Married My Wife – US Businessman, BABATUNDE BASHORUN was last modified: October 27th, 2021 by Damilola Akande