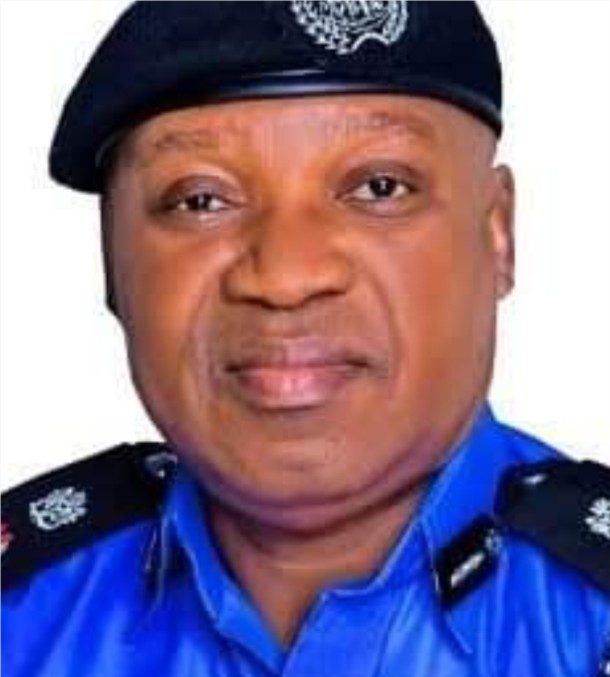 Abiodun Alabi is the new Commissioner of Police in Lagos. Since he came in he has done a lot. His style is also refreshing.  CP Alabi is very humble and down to earth. He is not an officer that is unapproachable. As a matter of fact, he genuflects to greet a lot of people. And that’s not even pretence because City People watched him closely for a couple of days.

On Friday, April 22, 2022, the Alawe of Ilawe-Ekiti Oba Adebanji Ajibade Alabi hosted a special dinner party to honour him. It was a classy dinner and it held in the palace of the Alawe. Top dignitaries from across the state, Lagos and Abuja were also present to honour him. At the event, some of the guests spoke so highly of him, that they noted that he has at one point or the other assisted them either professionally or otherwise.

CP Alabi is a proud son of Ilawe-Ekiti and through him, a good member of Ilawe sons and daughters have been enrolled in the force. Not that alone, he has contributed enormously to the growth of Ilawe-Ekiti. While his profile was being read, it was discovered that he is not just a professional security agent, he is also a peace-loving individual. According to those who have a close relationship with him, CP Abiodun never uses his office or rank to usurp anyone no matter what the case may be. He is a complete leader who considers his followers first. He has a soft heart for the less privileged and has always been there for them and uses his office to defend the defenceless.

These and many more attributes made Oba Adebanji Alabi confer the title of Okanlomo Ilawe-Ekiti on him and his wife also bagged the Erelu Okanlomo during the 10th coronation anniversary of the Alawe of Ilawe-Ekiti on Saturday, April 23, 2022, in Ilawe-Ekiti, Ekiti State. According to the CP, the new title was another call to duty. It affords him more opportunities to influence the younger generation for the better, it offers him the privilege to mentor the younger people both on the job and in his immediate environment. City People also gathered that this rare gem delights pleasure in placing people ahead of himself. It was not a surprise that his selflessness and service to humanity have won him so many awards and accolades and he is yet getting better at supporting people with his substance and influence.

Abiodun Sylvester Alabi, Fdc born December 31, 1964, hails from Ilawe-Ekiti, Ekiti South-West Local Government Area of Ekiti State and enlisted into the Police Force on the 3rd of March, 1990. He is married with children. He holds a Masters’s degree in Sociology and a Bachelors’s degree from the Obafemi Awolowo University, Ile-Ife (1989) and the University of Lagos (1986) respectively.

He has attended several courses among which are Junior Command Course, Intermediate Command Course, and Leadership and Senior Management Course. He has since served in various capacities in the Nigeria Police Force within and outside Nigeria, notably among them is the United Nations Mission in Kosovo (UNMIK) in 2001. He was mobilised into the elite Police Mobile Force as a Unit Commander in August 2001.

In April 2004, he became the Squadron Commander of Police Mobile Force Squadron 43 Lagos (Diplomatic Protection Squadron) in charge of the security of all Embassies in Lagos. CP Alabi was demobilised from the Police Mobile Force in June 2009 as a Chief Superintendent of Police and subsequently posted to the Lion Building Divisional Headquarters as the Divisional Police Officer (DPO) and later redeployed as the DPO of Ikeja Divisional Headquarters, Lagos respectively.

City People’s Brands Editor, DAMILARE SALAMI (08155134152) alongside Senior Photojournalist, Abdulrasheed Sanni caught up with him in Ilawe-Ekiti where he briefly answered a few questions.

Below are excerpts from the interview for your reading pleasure, enjoy.

Sir, the Kabiyesi is celebrating 10 years on the throne. As a stakeholder in Ilawe-Ekiti, how would you rate the last 10 years of his reign?

Our Kabiyesi has been a leader by example, he’s been very accommodating, and he is someone that has galvanized all the stakeholders in the town to ensure that we all work for the development of the community. I can attest to the fact that he has made some developmental strides in the town. In the last 10 years, we have not had any issue that can cause chaos or any outbreak of violence. He has been able to spur the youths and all the stakeholders to play a very vital role in ensuring that the desired development is achieved. You will attest to the fact that he was recently appointed as the chairman of Ekiti State Traditional Ruler’s Council and he has used that position to raise a lot of developmental activities not only in Ilawe but also in Ekiti as a whole. He is always consulting with the government and always reminding them of their duties. Recently, some foreigners came to this town in a bid to establish some factories; it is still part of his leadership style. It has attracted foreign investors to come and develop the town.

Taking a look at the general security status of the country sir, what do you think is the way forward?

The way out is for all hands to be on deck, security is everybody’s business. As far as I know, all security agencies in the country are doing their best to ensure that there’s the safety of lives and properties on the land. However, we can’t afford to live security to all the security agencies alone. Every individual has a role to play in ensuring that the country is secure by a way of intelligence and information sharing. If you harbour criminals and they are unleashing terror in your domain or territory, you are not being patriotic in that regard but if you share the information on time and that allows the security agency to nip them in the bud, it will be beneficial to all of us. So, everybody should be involved in securing the country.

There has been this clamour for state and local policing. As a matter of fact, a former president raised the issue just yesterday. Do you see that as a way to go?

I don’t want to discuss that issue because it is controversial and I cannot be airing my personal opinion when I’m still serving as a police officer. However, what I have to say is that this is a matter of semantics. Whether state police or local police, the fact still remains that community policing is part of the policy trust of this administration. The federal government has approved that the Nigerian Police should ensure that community policing is entrenched in our way of combating crime and that has been done. Policing has been brought to the grassroots by involving critical stakeholders at the community level to assist with critical information and this has made policing quite easy

I’m sorry to take you back a little sir. You mentioned earlier that people should give intelligence to security agencies regarding security issues. However, there is a huge lapse in terms of trust. People are afraid that they are not safe when they give such intelligence. How do you assure them of safety?

From what I just said, when you keep having critical stakeholders meeting in the community, constant meetings by a way of workshops, stakeholders meetings, and regular meetings with the members of the public and stakeholders in the community, it is a way of building trust. When you keep engaging them and you give room for them to engage you too, you are gradually building trust in such a community, you are endearing them towards you, you are telling them that you are not doing this work alone, you need their partnership, collaboration and corporation. And in the course of doing that, they will have confidence in the police and other security agencies and they will avail them with the necessary information and intelligence needed to do their jobs successfully.

What is your comment on the recent Chrisland School saga?

I wouldn’t want to comment on that now. Listen to me, it’s still a very fresh case. We just had an engagement with the staff of the school that are involved in the matter and for now, I have not been comprehensively briefed on what transpired between them and the State CID handling the case. But I assure you that the outcome will be made public as soon as it is ready.

You have been the CP in Lagos for the past three months, how do you rate security in the state so far?

I will leave that for you to judge. We are the ones working and it is only better for us to leave you to assess our performances. But for the past three months that I have taken over, I think we have been able to bring the crime rate to the barest minimum. So far so good, Lagos has been relatively peaceful for now, we have not had any serious security threat after I took over.

We are approaching the general elections very soon…

We are prepared for it.

What’s your advice for the Ekiti people as regards the forthcoming 2022 election?

My advice is for them to shun violence and play by the rules. As a stakeholder in this state, I want to encourage them not to get involved in any violent activity and have a free and fair election. Elections will come and go but society will remain. If you destroy any infrastructure because of the election, what will happen when the elections are over? So it is important to shun all forms of brigandage and stay focused on development. Thank you.

How I Have Found My Job As LAGOS Commissioner – CP ABIODUN ALABI was last modified: May 11th, 2022 by Damilare Salami

How My Ex-Girlfriend Taught Me How To Speak English – Alujo Gospel Singer, LAOLU GBENJO