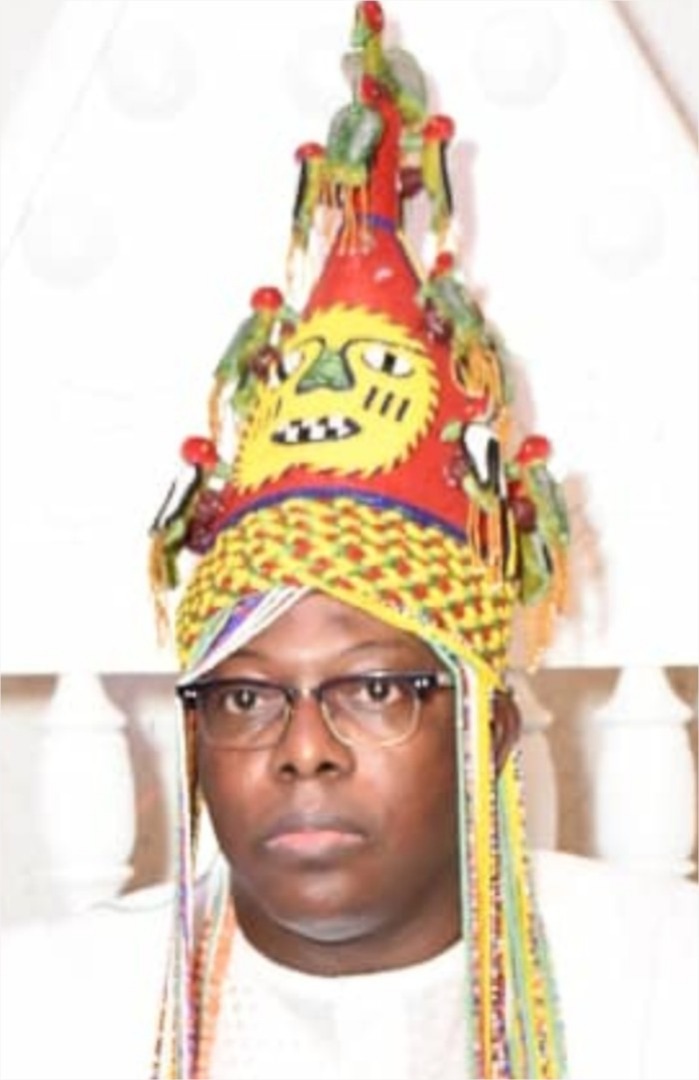 •What HRM Said At His Installation

When HRM Oba Abdulwasiu Omogbolahan Lawal (Abisogun II), was announced the new Oniru of Iruland, Victoria Island, Lagos, a few days ago, many felt it was an honour well deserved, while those who had misfeelings later agreed that no one would have been fit to wear the crown than HRM Oba Abdulwasiu Lawal.

On Sunday 7th June, 2020, all roads led to the spacious Oniru Palace in Iru Local Government in Victoria Island, Lagos. The Palace and its surrounding was filled with various exotic automobiles as Oba Abdulwasiu was installed as the New Oniru of Iruland amidst pomp and pageantry.

The historical event which put an end to the obaship tussle in Iruland has brought final peace to the commercial city of Oniru Land.

The sayings, ‘never struggle for what is yours’ could be liken to the new Oba Iruland, as former Lagos State Commissioner got the full support of the Abisogun family. They were all clad in White and Royal blue headgear, as they came out in hundreds to support their own. Not until the coronation day not many know how close Prince Akeem Ajasa is to Oba Abdulwasiu Lawal.

Perhaps this was one of the reasons Prince Ajasa danced into the palace with his friends on Coronation day. He was spotted in white flowing agenda, while the Abisogun family danced in with him. He sprayed and shared money to many before he went in for the coronation.

Do you know that the New Oniru and Governor of Lagos State, Babajide Sanwo-Olu have known each other for 25years. This was revealed by the Governor himself during his speech. Sanwo-Olu in his address described the event as “historic day” in the history of Iruland.

While congratulating the sons and daughters of the kingdom, Sanwo-Olu, urged them to rally round and support the new Oba for the growth .

He said, “Given the pedigree of His Royal Majesty, I have no doubt that his reign will be a progressive one.

The traditional institution we are celebrating today predates all other systems of governance.

“The traditional institution will continue to be reckoned with, well into the future. It will forever be our unshakable connection to our rich and proud heritage and a guiding and comforting presence at all times.

“Our traditional rulers are playing very strategic roles in contemporary society, not only as symbols and custodians of our traditions and cultures but also as rallying points for all of society; agents of stability and development.

“Only a few days ago I inaugurated the State Community Policing Advisory Committee, with Akiolu, the Oba of Lagos and Chairman of Lagos State Council of Obas and Chiefs as Co-Chairman – in what is yet another testament to the important role of our traditional rulers in governance and in the attainment of peace and security in our communities and our State.”

The governor, who pledged the full support of his admnistration towards the realization of the vision for Iru Kingdom, said, “Government will continue to accord this part of the state, like all others, the attention you deserve, in terms of infrastructure, economic empowerment, human capital development, and security.

“There is no doubt that the future of Iru Kingdom continues to be bright and promising, and that the ascension today of Oba Lawal, Abisogun II, marks the start of the next phase of the journey into that future.”

He commended the kingmakers and elders of Iruland as well as the ruling houses for the peace and mutual understanding that have characterized the process that led to the installation of the new monarch, within a period of less than one year after the demise of the previous Oniru.

“I enjoin His Royal Majesty to build on this foundation. There is no better way to ascend to this worthy throne than in this atmosphere of goodwill and harmony.

“As the father of all of Iruland, you have an important responsibility to strengthen the existing bonds of unity for the overall development, peace and progress of this historic kingdom,” Sanwo-Olu urged

There is no doubt that the Oba Lawal becoming the king is divine. He didn’t plan it, he never saw it coming.

Oba Gbolahan Lawal who expressed shock on how he never envisage his ascending his throne revelaled this in his speech. He even explained that when Oba Akinolu called him a week before his corronation on ascenrtion to the throne. He said Oba Akiolu said you are a Prince in Iru, what is your role and are you contesting? He revealed that he didn’t know he will be crowned.

Your selection is divinely commissioned and you show appreciation to God by ensuring justice and fairness in your dealings with everyone,” Akiolu admonished.

The newly crowned King spoke about his chat with Tibubu few days to the coronation. He said that he was so surprised on how Asiwaju Ahmed Tinubu who was his boss and mentor of many years addressed him. He said that not only was he marvel at how Tinubu addressed him 4days before his corronation he was surprised that his boss could address him that way.

In his acceptance speech, Oba Lawal, promised to be fair and just to all, during his reign and expressed commitment to the development, progress and unity of the kingdom.

He even explained that when Oba Akinolu called him weeks before his corronation on ascenrtion to the throne. He said Oba Akiolu said you are a prince in Iru, what is your role and are you contesting? He revelaled that he didn’t know he will be crowned. He even said that he was so surprised on how Asiwaju Ahmed Tinubu who was his boss and mentor of many years addressed him.

He said, “I give all thanks to the Almighty God for making all of us see this day. In the journey of my life, I have received several divine favours and benevolence from the Almighty God, but then, distinguished guests, I affirm that none of the preceding benevolence of God has the same effect on me as my selection and installation as the 15th Oniru of Iruland.

“I consider it a divine call to succeed the legendary Oba Abiodun Idowu Oniru, who reigned for 25 years. I pray to Olodumare to grant his, and the souls of all my departed forebears’ eternal rest. Without any doubt, succeeding such an iconic monarch comes with its peculiar challenge. Together we shall overcome all challenges and make Iruland a better place for all. “Iruland will continue to align with the vision of our forebears for a cosmopolitan, thriving, and prosperous Lagos. Our vision is that Iruland will in no distant future rival the likes of Greater New York City, in the United States of America.”

He expressed appreciation to Asiwaju Bola Tinubu, Governor Sanwo-Olu, Oba, Akiolu I, and members of the State Executive Council, kingmakers for graciously approving his selection to ascend the throne. “I was shocked when I was having a conversation with my mentor, Asiwaju Bola Tinubu as he called me Kabiyesi. I was marveled beyond description,” Oba Lawal stated.

He continued, “This appreciation will indeed be incomplete without publicly acknowledging my dear mother whose lineage in the first instance made this ascension to the throne possible. Mother, I will forever remain grateful to you for everything you have done in my life. Thank you, mama mi. I also thank my darling wife, Olori Mariam Lawal, all my children and other siblings for their love, support and prayers. I am eternally grateful to all of you. I appreciate and love you all.”

“On behalf of all the sons and daughters of Iruland, I express profound gratitude to the kingmakers and the Government of Lagos State in ensuring that there was fairness, equity and justice in the process leading to my selection.

“The conscious and deliberate adherence to the principle of fair play has ensured that my ascension to the throne of my forebears is without rancor or bitterness. Expectedly, several of my brothers, Princes had expressed their interest in the Royal Stool, and expectedly only one of us emerged as Oniru of Iruland. There is no victor and there is no vanquished.

“I hereby extend my hand of fellowship to distinguished brothers, Prince Adesegun Oniru and Prince Akeem Ajasa for giving support to my selection as Oniru of Iruland.

“Let me urge you to continue to pray for me, whatever your religion, please pray that God would give me wisdom and strength to carry out the duties of my throne.”

On the COVID-19 pandemic, Kabiesi stressed “its real. Let’s get fired up. The compliance level should be scaled-up. “We can only win the war together if we comply with all safety guidelines as set by the authorities.”

In his address, Oba Akiolu, who reeled out the history of the dynasty to the newly crowned monarch and guests, admonished him to be wary of sycophants around him who are only interested in feathering their nests.

He also urged the new Oba to embark on immediate reconciliation of all aggrieved royal members of Iruland for the progress, unity and peace of the kingdom. “You must leave Iru kingdom better than you met it and not the other way around.

“Your selection is divinely commissioned and you show appreciation to God by ensuring justice and fairness in your dealings with everyone,” Akiolu admonished.

HRM Oba Abdulwasiu Omogbolahan Lawal, was born on July 24 1970 to late Chief T. A. Lawal- Akapo, the Ojora of Lagos (1977-1993) and Olori M. A. Lawal-Akapo. Gbolahan is a Lagos Prince from the Ojora, Aromire, Shokun and Abisogun branch of Oniru Royal families of Lagos State.

Lawal holds an Executive MSc in CITIES (LSE, Cities) from the London School of Economics and Political Science. He also obtained an MSc in Violence, Conflict and Development from the School of Oriental and African Studies [SOAS], the University of London in 2008; a BSc Hons. in Botany from the University of Port-Harcourt in 1992 and a product of the famous St. Gregory’s College, Lagos.

How I Was Made The New Oniru Of Iruland – Oba ABDULWASIU OMOGBOLAHAN was last modified: June 15th, 2020 by City People