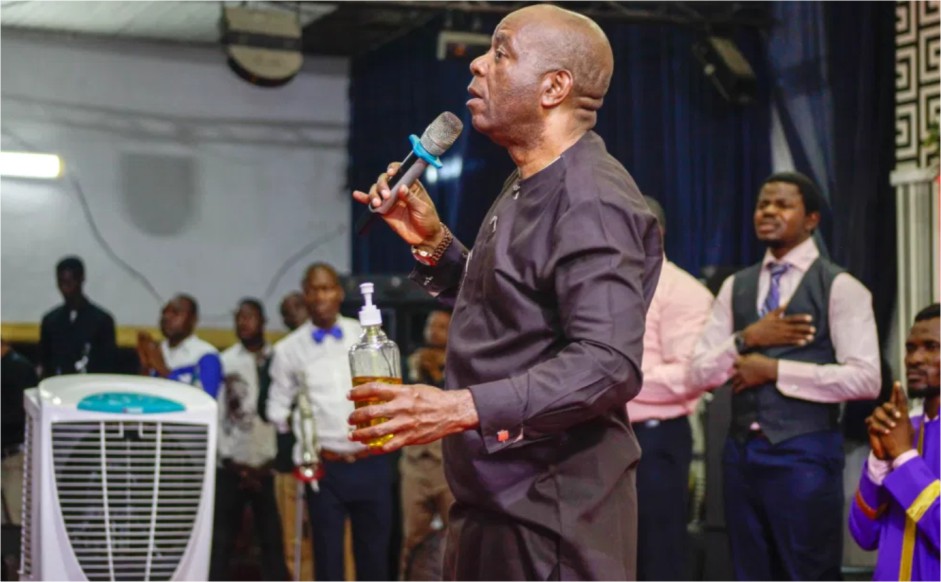 Prophet Peter Abiola Adebisi is a Nigerian Inspirational Christian leader, a prophet, an author, and the founder and president of Christ Miracle Church Mission (CMCM) and Champions of Fire Ministry with it’s international headquarter in Lagos.

Prophet Peter Abiola Adebisi was born on Thursday, January 15, 1963, to Mr Tijani and Mrs Tejumola Adebisi (both late now) in Ibadan, Nigeria, but he’s a native of Ila-Orogun, Osun State. He was raised by Muslim parents who struggled financially for the major part of their lives, though their ancestors had been part of the royal family in Ila-Orogun several decades back (a position where Abiola has used his anointing and the grace of God upon him to restore the family and indeed the lineage back).

Young Abiola studied at the Oyo State College of Art and Science (OSCAS) now called the School of Science, in Ile-Ife, Osun State. His intention was to become a lawyer, but God had a different plan for him entirely. He was regarded as a rascal at school and loved to play football, thus, he was nicknamed “Algeria”. And, as a young lad, he took pleasure in moving around with his friends, who found it difficult to leave him because of his generosity towards them, always willing to share things with them even if it’s his last meal. Again, prior to the prophetic calling on Abiola, he had shown such inclination in several instances, telling people what will happen to them in a particular situation and time, and it came to pass exactly as he had said. But, he was blind to his own gift and was simply satisfied with just enjoying his youth to the fullest while nursing the ambition to be a lawyer in the court of human justice.

Peter Abiola Adebisi is now a respected man of God, who uses the gift and the prophetic calling alongside his extremely humble character to attract many to the salvation of God through Christ Jesus. His journey to the Lord started with an encounter he had with Prophet Obadare, one of the most renowned prophets in Nigeria. The man of God, Obadare, came to Adebisi’s town in Ila-Orogun for a crusade, and the young Adebisi with his friends decided to visit the location with an intention to show disregard to the gospel of Jesus. But, interestingly, Abiola caught the attention of God and was arrested by the awesome power of God that overshadowed that arena, such that, Abiola couldn’t find his way out – he couldn’t locate the exit, the exit appeared fenced and there was no way out for him. He was scared, and he screamed to his friends who had already exited the area waiting for him outside, for help. They came to his rescue and walked him out of the field.

As he headed home, his rate of seeing visions increased tremendously – God opened his eyes: He saw two clear visions, one, that some hoodlums looted a car and; two, that some gangs got into a compound and strangulated an old woman – it happened exactly as he predicted. He was yet quite naive about the ways of the Lord and did not know what was happening to him. He became so confused and uncomfortable. Not quite long, the renowned prophet, Obadare, made a return visit to Abiola’s town, and was meeting people at the King’s palace – many turned up for counseling and spiritual solution to their case, and Abiola made the list. And as he appeared before the Prophet, who couldn’t see physically, the man of God called out Abiola and declared that he has been called by God to be a worldwide Prophet and a man of God whose influence will transcend the shores of his country.

In the year 1987 Abiola encountered the Mighty God and was called into the ministry of the prophet by fire. He saw the heaven opened and fire descended upon him, God spoke and said to him “ I have given you the power of Peter.”

Prophet Abiola lost his sight and was rendered incapacitated for a period of time. He gave his life to Christ in the course of this travail, at age 24, and God began to communicate with him regarding his calling and the ministry he had set in his hand for deliverance, salvation, and transformation of many lives. He later got his sight restored and he has never looked back since then. The young prophet devoted himself to prayers and fasting, and God began to use him, declaring the power of God, turning back the hand of the devil and the evil influence of witches and wizards in Ife. In fact, the power of God was so heavy upon him, that, he was led home by God to expose the evil powers behind the demise of his father and relatives who died in succession within a very short period of time (Peter and his siblings had fled the town because of this incident and scattered themselves all over the place in several locations). Without doubt, the culprit was revealed by God and exposed, and the whole community was filled with joy for the mighty experience of God’s power, and how he had turned and transformed a stubborn and rascally Abiola to an instrument of power to uproot and disgrace a major element of darkness and fear in the community. In the end, they all glorified the Lord and most of them gave their lives to Christ: Most of them are pastors and evangelists all over the nation today.

Truly, Prophet Abiola’s mother, who had been afraid that her son might not turn out well in life because of his rascally precedence, had to confess Jesus as her savior, and she’s ever grateful to God for turning her son into a miracle and a solution to humanity. She lived the rest of her life in total devotion to the work of God and the purpose of his kingdom as she served with The Redeemed Christian Church of God in Ila-Orogun till she breathed her last.

After spending some time in Ile-Ife, the young prophet was lead by God to Akure and was received into the residence of Mrs Adegbola, where he started the ministry, Christ Miracle Church Mission, on the 13th of March, 1989. Today, the church has gone worldwide according to the prophecy at the inception, with numerous branches within and outside Nigeria. The first revival service, with 53 people in attendance was held in the compound of Pst (Mrs) Adegbola. The church grew tremendously and moved to its own site before the end of that year. Indeed, this 53 congregation has grown into thousands of worshipers spread across the globe from Nigeria to other parts of Africa including branches in Europe and America. Indeed, CMCM has become a church without walls!

After building the ministry to an enviable status in Akure for over eight years, he was instructed by God to leave all he had and all he has achieved in Akure and head for Lagos – God promised to fend for him from scratch. Truly, God did not fail him: Though, it was highly inconvenient, yet, he obeyed and moved swiftly towards Lagos; the King in Akure and some of the high net worth people who had experienced the grace of God on the life of the Prophet, though it was a wrong move. But, Peter was unshaken in his trust in God and the demand of being loyal and obedient to God at every instance.

God continued to use Prophet Peter Abiola Adebisi in an immeasurable way; the church’s monthly vigil turned to Sunday service as the worshipers increased greatly as a result of the miraculous acts of God through the ministry of the Prophet alongside his visible and contagious humility. The growth has been remarkable, and presently, the church’s international headquarter is situated at Akiode, Ojodu, Lagos – the megachurch is a 2-wing hall with a 2-storey church office and a 3-storey building being occupied by the Children’s church, the Champion of Fire Television (CFTV) office, and Champion of Fire Bible Institute. From the Lagos headquarters, several branches have been established not only in Lagos State, but it has extended to all major Nigerian cities including the Federal Capital Territory, Abuja.

The Prophet is married to a delectable and amiable Pastor (Mrs) Folashade Olatunbosun Adebisi, his beloved sweetheart, whom he married on the 16th May 1998 and they are blessed with children. She’s the pastor in charge of the churches of CMCM in Europe, a region that is experiencing tremendous growth. Pastor Folashade is a devoted woman of God and a caring mother, not only to her biological children but to all her sons and daughters in the Lord. She’s a very quiet and highly respected woman of faith, quite unassuming and highly focused on the growth and the development of the church, and on the unlimited power of God to take the ministry to 168 countries as He has promised his oracle, Prophet Adebisi Abiola.

READ ALSO: HOCKER! MANY MEN ARE DYING OF PENIS FRACTURE

SHOCKER! Many Men Are Dying Of PENIS FRACTURE