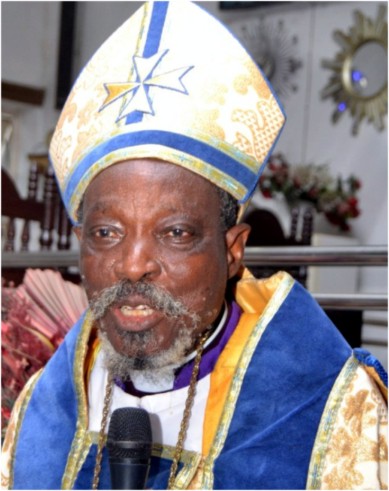 •Details Of The Classy 3-Day-Event

It was a moment of mixed emotions at the Olorunwo Cathedral of the C&S Church Gbagada on Friday, September 17, 2021 when a mammoth crowd gathered from different parts of the country to celebrate the life of Primate Olorunwo, a man who had made a lot of impact in his 85 years sojourn on earth.

His burial rites started on Wednesday with a Service of songs, Christian wake on Thursday, while the final burial took place that Friday.

CityPeople’s Brands Editor, DAMILARE SALAMI 08155134152 was present throughout. He was there with Photojournalist, Sunday Oyemade. Below are excerpts of the report of his burial.

In his lifetime, one thing Primate Emmanuel Omolaja Olorunwo never joked with was his children. He loved them a great deal. He was fond of describing them by their titles. All of them are damn good professionals. Some of them have in fact served in public offices, both at the state and national levels. They are Mrs Yewande Otunsanya, Mr Ilemobayo Olorunwo, Magistrate Oketola Sam Obaleye, MS Omotinuolawa Olorunwo, Mrs Temitope Animashaun and Barrister Omolayo Olorunwo. They were also dressed in white and took the front position inside the auditorium. Their joy knew no bounds seeing how a large crowd came to celebrate their father even in death. Primate Olorunwo’s grandchildren were spotted as well, dancing and praising God for a fulfilled life.

IT WAS AN ALL-WHITE AFFAIR

In his lifetime, Baba Olorunwo was known to be a man of high reputation and dignity. He was also known for cleanliness. He was always in white. Little wonder his funeral service was as beautiful as the parade of angels in heaven. It was an all-white affair. Virtually everyone in the auditorium was dressed in all-white outfits. It was beautiful indeed. From the podium down to the overflow, everywhere was sparkling. From the first day to the last, his wife and all his children and grandchildren at the event were adorned in different beautiful white attires all through.

As of 3:30 pm on Wednesday, September 15, the Bakare Dawodu Street in Ifako, Gbagada had already come alive with people trooping in and out. Everyone knew something big was happening and there was no need for a guess because the street had been decorated with big banners that told the story. Fast-forward to the event, it was more of an artiste night than a service of songs. There were about six different gospel artistes in the house. They were headlined by the popular band, Ayan Jesu while one of Baba’s daughters, Empress Seun Aransiola rounded off the day in a big way.

Deborah Joseph is a performing gospel act who is based in the United States of America but had to come down to Nigeria for the Primate’s funeral out of respect and much love. She was one artiste that revealed the huge role Primate Olorunwa played in her career and affirmed that she wouldn’t be where she is today if not for Baba’s impact and influence.

The night of music started with a delivery of some beautiful classical masterpieces by an orchestra group known as the Scales Musical Concept. They had three beautiful soul-lifting renditions accompanied by violins and double-base.

Shortly after the Orchestra performance, was a young lawyer and musician who goes by the name Osagie Obaimu. He delivered a highly spirited performance that got many people on their feet dancing. He afterwards revealed to City People that he works at the chambers of Barrister Omolayo Olorunwo, one of Baba’s children and that he’s had time with Baba and has been influenced and impacted by this great man of God, this was why he had to be at the event to pay his last respect by performing at his service of songs.

Dapson was another young and fast-rising musical act that set the event ablaze. He opened the floor with some of Baba’s most loved hymn songs. His performance was basically on hymns and spiritual songs and he did so well. He reminded many of how musically active Primate Olorunwo was.

AT THE CHRISTIAN WAKE

The wake was another eventful day. It marked the second day of Primate Olorunwo’s funeral. Some eminent Nigerians were there and they spoke so highly of the late archbishop. Not just prominent people alone, even the average people on the street had something positive to say about Baba. They were not just being modest, he had impacted their lives. Everyone who came in contact with Baba directly or indirectly had received some kind of blessings from him. For some, it was spiritual while many had tangible gifts like cash, clothes and food items.

If there was any man more liberal when it comes to religious matters, it had to be His Eminence, Archbishop Omolaja Olorunwo. At the wake, Senator Ibikunle Amosun, the former Governor of Ogun State revealed what fascinated him most about the late Primate Olorunwo. In his speech at the wake keep, Senator Amosun revealed how Baba Olorunwo gave his land for the building of the Owu Central Mosque.

Hear him: Baba’s life was a lesson to all of us. While we are here, we must try to do good to as many people as we can. If you listen to all that was said about him and I told you my own personal encounter with him as well. It is not as if I see Baba every day, no I told you, I only got to know him some years ago but I noticed that Baba is always present in anything we are doing in Owu and he would always stay from the beginning to the end and when we wanted to build the mosque, I explained how he gave his land and also was fully involved in the building of the Owu central mosque, and that drew me closer to him. I think it was in 2007/8 and ever since that time, we’ve been quite close”, he said.

IT WAS TESTIMONIES GALORE

Different people had things to say about Primate Olorunwo and they were all positive. Not one person had a doubt in his mind about Babas personality. He was a good man indeed. He fed people, sheltered them, sent them to school, adopted many children and even catered to the needs of the destitute and less privileged. One of the testifiers at Baba’s wake revealed that Baba had been sponsoring his education from pry school since 1999 without even knowing his parents. He was the kind of Jesus people pray to meet daily. It was also said of him that he was not religiously biased. Baba would relate so well with anyone irrespective of their religious affiliation or tribe.

Omotunde Adebowale David, popularly known as Lolo1, is an actress, and a radio presenter. She hosted the radio programme, ‘Oga Madam’ on Wazobia FM 94.1, till 2019 when she left and joined Lasgidi FM as the general manager and an on-air personality.

She started her career as a legal practitioner after being called to bar in 2000. She worked in the Law department before dropping it for media broadcasting in 2004. She is also known for acting, in Yoruba and English movies. She featured in the popular series Jenifa’s Diary where she acted as Adaku. She became an On-Air Personality for the first time when she joined Metro FM. She later joined Wazobia FM, then she left in 2019 after over 11 years with them.

Lolo was present from the word go at Baba’s funeral. At the Christian wake, she revealed that Baba has been her father since 1993. She urged the congregation to immortalize Baba and ensure that his legacies are not soon forgotten.

More than services alone, TOS Funerals strives to build relationships based on integrity, experience, value and trust. It also aims to instil a high level of professionalism into the funeral industry in Nigeria, providing and maintaining world-class standards in mortuary services.  All of TOS products meet the most stringent quality standards and this is not merely by chance, but rather the result of the company’s years of experience.

Do you know that unlike every other funeral company in Nigeria, TOS Funeral is the only company that does not dance with the corpse casket? The company believes that the family are grieving and should be allowed to bury their lost loved ones in coordination and respect. These and several other reasons were why they were contracted.

Give it to those who planned the event, they did so well. Baba’s tomb was beautifully decorated, well designed and well-lit. It simply befits his status. The casket was all white and glass-like.

Chief Francis Ipoola Olaniyan CFI is the founder of Victory Group of Schools. This very elderly man appeared to be lonely at the event, he just sat all by himself watching how his friend was being celebrated in death. An inside source revealed to City People that he was Primate Olorunwo’s best friend. It was obvious that life would be very difficult without his friend in the picture but he has to move on. He also paid his last respect while baba was committed to mother earth.

There were tears at the graveside. It was simply because Baba was well-loved. His beloved wife only had one word to say at the graveside… “Please let me touch him” were her words as she cried profusely. His children too were very emotional. They tried to hold themselves but it wasn’t easy. They eventually wept because Baba will be sorely missed.

OWU KINGDOM CAME DOWN TO LAGOS

ROLL CALL AT THE BURIAL