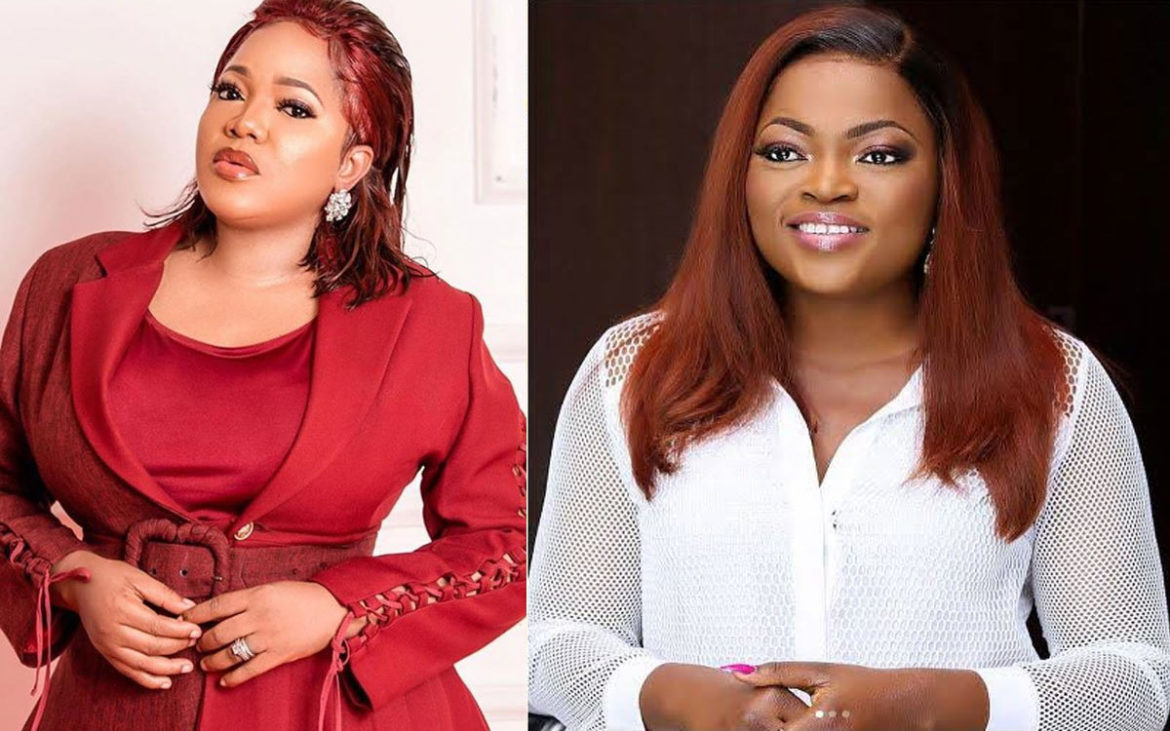 Nollywood superstars, Toyin Abraham and Funke Akindele have been at war for unknown reasons. Many call it a cold war because they will never call each other out on social media or on any occasion, but they avoid each other like plaque., They don’t celebrate each other on their different social media handles.

They both got popular featuring in Yoruba movies, but today, they are rated among the best in both English and Yoruba movies.

These two great stars have grass to grace story in the movie industry and lots of upcoming stars look up to them as role models and mentors in the industry and one can’t be wrong if you say Toyin Abraham is taking the lead in the industry, after Funke Akindele but many see it as competition and they both have a large fan base who often tends to start rifts between them with their awful comments and comparison.

Toyin will always admit, she is not in competition with anybody but only grateful that she is not where she use to be few years ago.

Funke Akindele on the other hand is a senior colleague to Toyin Abraham in the industry, who has paid her dues and only enjoying the fruit of many years of hard work in the industry.

They are both happily married and fist time born, whose husbands are also in the industry. Funke Akindele’s husband JJC Skills Co-Produce and Co-Direct all Scene One Projects and they are both rated among the powerful couples in the entertainment industry.

Besides their successful career as actresses, producers and directors. They are both faces of big and reputable brands in Nigeria, and they are both paid in millions for just influencing for brands.

They are both among the highest-paid actresses in Nollywood. They both equally have millions of followers on social media, who are also die-hard fans, and these two can never do any wrong in their eyes.

It was revealed that these two were doing lots of similar things in the industry and this has resulted in a cold war between them.

Many noticed the rivalry and cold war during the last AMVCA when Funke Akindele emerged Best Actress in a comedy with the movie moms at war.

They both didn’t celebrate each other and just ignored themselves. As if that was not enough, another instance was when Funke Akindele was stripped off her deal as the ambassador of Nigeria Centre for Disease Control (NCDC) after she hosted a loud party for her husband JJC Skillz despite government warning against social gatherings during the lockdown. And it went viral that she was replaced by Toyin Abraham after Toyin was featured in the campaign by NCDU to educate the public on how to protect themselves and prevent the spread of Covid-19.

Toyin Abraham debunked the rumour about her replacing Funke Akindele.

According to her, it is not a case of taking advantage of a bad situation but rather campaigning against a pandemic.

Then their cold war became very evident when Funke Akindele chose to premiere her movie “Omo Ghetto The Saga” the same day Toyin Abraham’s movie “Ghost And The Tout” started showing in cinema across Nigeria and this will leave lots of fans of both actresses the choice to either visit the cinema to watch “The Ghost And The Tout” or stay glued to Netflix to watch “Omo Ghetto The Saga”.

As if this was not bad enough a particular page on Instagram who reviews movies did a terrible review on Toyin’s latest movie and this generated more crisis. According to the page “over the years, we have told you many truths but non greater than this, intelligent minds were not taken into consideration at all in the writing and in the making of “Ghost And The Tout Too” too, thirdly intelligent minds will not enjoy it at all.

Regardless of how flagrantly it copycats off “Omo Ghetto The Saga” desperately hoping to shine like it. Unlike that one “The Ghost And The Tout Too” doesn’t understand that movie making is rooted in brain work and not in using cinema to do yahoo, abusing stardom to fierce fandoms.

Trust us, if you are intelligent, you are better off staying back home this weekend to watch “Omo Ghetto The Saga”, which incidentally opens on Netflix this Friday, if not brain go pain you time”.

Many condemned this and conclude it is not a review, but bringing one actress hard work down for another and should have review Toyin Abraham’s movie without comparing or mentioning Funke Akindele’s movie which definitely will increase the cold war that was already existing between the two talented stars.

READ ALSO: MEET SOME CELEBRITY WOMEN WE WROTE ABOUT 25 YRS AGO WHEN CITY PEOPLE STARTED PUBLISHING

Meet The Yoruba Actresses Who Hit It...

How My Herbalist Role Gave Me A...