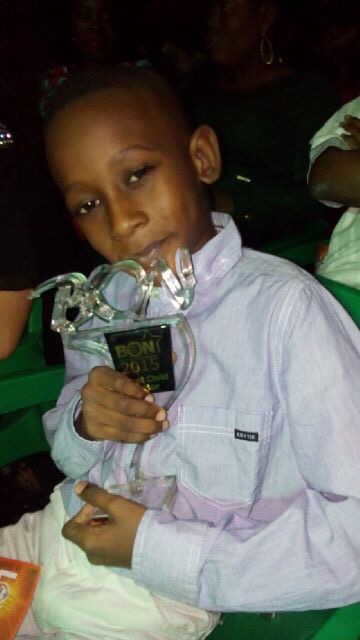 In the Nigeria movie industry today, there are quite a handful of kid actors who are already making their mark in the profession and leaving no one in doubts about their desire to excel and climb to the top of their career within the shortest possible time- Nollywood legend, Ejike Asiegbu’s talented kid actor son, Etochi, is one of such emerging actors. Etochi Asiegbu Mikel is only eleven years old, but he certainly carries an astonishing amount of confidence and intelligence that is far bigger than his age. The young man, who recently won City People Movie Award’s Best Kid Actor of the Year, already has under his belt a couple of successful movies in which he’s delivered superlative performances.

And from the confidence he exudes, it’s looking quite certain that this impressive chip off the old block has not even begun to scratch the surface of his massive talent yet. Moments after he picked up his award at the Award ceremony, City People’s Senior Editor, WALE LAWAL, spent some exciting few minutes chatting with Etochi Asiegbu, and he didn’t disappoint. He responded to every question with unbelievable ease, needing absolutely no assistance from his parents who were seated only a couple chairs away from him. Enjoy excerpts of the interview.

How do you feel receiving the award as the Best Kid Actor of the Year?

I feel very happy. I was just praying to God and hoping I will win. I posted a lot of pictures on Instagram, asking people to vote for me and I’m so excited I won. I thank everyone who voted and I’m really grateful to God.

When did you start acting?

I began acting at the age of seven.

I am eleven years old now.

How do you feel being the son of a very famous legend like your dad?

I feel very proud of him. He’s a legend. Anywhere I go, people talk about him whenever they’re talking about Nollywood. This makes me understand that he’s very famous and popular. I feel really proud to be his son. A large part of my talent is from him as well as from God. And he’s a great dad too.

Did your daddy encourage you to go into acting, or you started showing the interest yourself?

I would say I am the one who started displaying the talent and then my dad started to notice the talent in me. I also have a brother too who can act as well, and he’s very good, but he’s not here, he’s in school.

How have you been able to balance your academics with the demands of acting, which sometimes includes going to locations when you should be in class?

My mum helps me to take care of all that. Truly, there were sometimes when I missed school because of acting and my mum did not really like it and I never liked it either, so she made arrangements with producers that whatever acting job they want me to do should take place during the holidays and not during school sessions. I’m going to have a shoot very soon, the movie’s called the Nigerian Train. I will be doing my own scenes during the holidays or at weekends only, once school resumes.

Which has been your most challenging movie role so far?

I’ve not had any role yet that I can call challenging. Maybe I can say one of the new movies I just did, titled Anarvey, it’s not out yet, I will say it’s my most challenging role so far.

Which of the movies you did made you popular?

Apart from your dad who definitely must be your favourite super star, who are the other actors that have influenced you?

My dad, I can say, is my number one. I don’t really know many of the other top Nigerian actors yet, I think I know only a few of them. The ones I really know very well, that I’m familiar with are foreign actors like The Rock Dwayne Johnson, he was a former wrestler and now he’s an actor, I really like him and I learn a lot from him. There’s also this foreign show, this is like a shout out to Nicky, Ricky, Dicky and Dawn, I really learn a lot from them too. They do a lot of crazy stuffs and I try to learn from them because I feel a little shy when I need to do crazy stuffs, so I watch them a lot and try to see if I can learn a thing or two from them.

Were you shy when you started acting at first?

Yes, sometimes. There were times I felt I didn’t do too well on set but my mum and dad would say I did it perfectly and I would be very surprised. But afterwards, my confidence began to grow and now, I think I’m a lot better than when I first started.

What do you plan to become in future with your academics, outside of acting?

Give us one last word for your fans and also to young people like you who want to follow in your footsteps..

Believe in yourself, don’t be shy. Don’t ever think you can’t do it, go and try to express yourself. And to my fans, I want to thank you for the support. This is just the beginning, there’s more movies to come from me.

What Has Kept My 15 Yr Marriage To OLA IBIRONKE