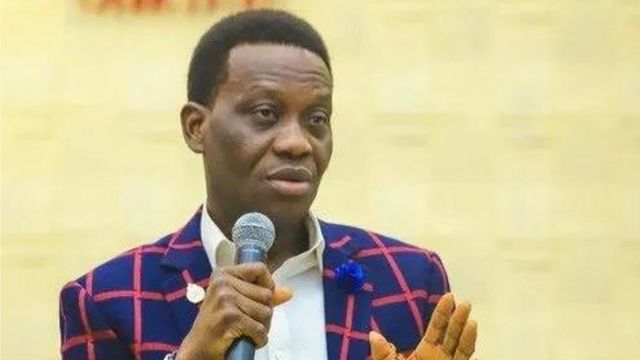 The family of Pastor E.A Adeboye, the G. O. of Redeemed Christian Church of God, RCCG was thrown into mourning in the late hours of Wednesday, May 5, 2021, as the news of the death of Dare Adeboye, the 3rd child broke online.

Late Pastor Dare Adeboye reportedly passed on in his sleep a day before the official announcement. The report has it that he was neither sick, nor on medication when the tragic incident happened.

According to inside sources, it was when his wife, Temiloluwa noticed her husband’s unusual sleeping hours and could not reach him on the phone that she raised the alarm and he was discovered dead.

Before his death, the 42-year-old was the Assistant Pastor in charge of region (Youth) 35, and had ministered the previous day and was said to have retired to his bed but could not wake up.

His wife would later go to check up on him on noticing that he had slept for too long, when she discovered he was dead, and called for help.

Inside sources revealed that once the wife suspected something was wrong, she promptly called for help and men of God from all over joined hands in prayer for God to revive his son.

It was a select group of renowned prayer worriors that stormed the private residence of late Pastor Dare Adeboye in Eket, Akwa Ibom where he was based. They evoked the spirit of God, and pleaded to God with prayers not to take his son away from them. They were all drenched in their own sweat as they shook the heavens with prayers. But it was all too late. The Lord had spoken and his will alone would be done.

Popular gospel musician, Nathaniel Bassey, also confirmed this in his condolence message. The musician made it known that before Dare Adeboye’s death was announced to the world, it was known within the inner cirle and they prayed, danced to God for a miracle to happen but it didn’t, the Lord close to have his way this time.

The sad news got to Daddy G.O. who was believed to have gotten premonitions about the event before he was told. Pastor Adeboye promptly left the house and went to a secluded place within the Redemption Camp to seek solitude with God.

By the time the news filtered round the camp and social media, there was reluctance to broadcast the story, as Daddy G.O’s Redemption Camp resident was clustered by concerned sympathisers who wanted to confirm the authenticity of the report.

City People put a call across to one of the provincial pastors who seemed to be in a position to confirm the story, but according to him, “We have refused to accept the report of the devil. God is alive and so is his son”. Please don’t publish unverified reports”, he said as he ended the call.

By the morning of Thursday, May 6, 2021, the curtain had fallen on Pastor Dare Adeboye. The rumour became a reality. The mighty has finally embraced the cold arms of death and made his pass into the great beyond.

About 2 am on Thursday, Daddy G.O. was seen coming from seclusion into his residence as the mammoth crowd who assembled at his house paved the way for his passage. According to one of the waiting sympathizers.

Pastor Adeboye had in 2020 described Dare as his first miracle child. The respected clergy while celebrating his son’s birthday said God put the devil to shame 42 years ago when Dare was born. He prayed for the celebrant and also prayed that those seeking a miracle from God will receive it.

“Our first miracle child. We pray that God will keep his miraculous working power in your life and all those who need a miracle today, will use you as a point of contact for their own in JESUS’s name. (Amen) love from Dad, Mom, and the whole Adeboye dynasty.”

Confirming the sad development, a top shot in the RCCG family said: “Shock. Disbelief. Tears. Thanksgiving. Praise. Total submission to the will of God. Pastor Dare’s death is painful, unexpected but who dares to question, God?”

Commonly known simply as “Pastor D”, Pastor Dare Adeboye is the one of the most influential Youth Pastors in The Redeemed Christian of God Worldwide. With posts previously in England (RCCG House of Praise Birmingham Senior Pastor), Kaduna (RCCG Kaduna 1 Provincial Youth Pastor & RCCG Region 8 Youth Pastor), and Abuja (North Central Youth Evangelist covering all the YOUTHS, RCF, RCCF, & PSF in the states of Niger, Benue, Kwara, Kogi, Nasarawa, Plateau and FCT) he understands and associates with the next generation of the church. His various posts (RCCG Youth Affairs National & International Director of Programs / Chairman Organizing Committee of 70hrs Messiah’s Marathon Praise, National Youth Convention & Northern Zone Abuja SHIFT) have enabled him to comprehend the various landscapes of young people across the globe and how to increase the church’s influence. He dedicated his life to educating & inspiring young people on how to capitalize their faith in the various environments they find themselves in.

He created mediums for young people to feel empowered and prepared to carry the mantle of the church and also expantiate the church’s mission and goals. His fire for God is easily caught and transversed to the numerous lives he touched. He was married to Mrs Temiloluwa Adeboye and they were blessed with a beautiful and bubbly daughters.

The deceased who was an Assistant Pastor in charge of Region (Youth) 35, had ministered the previous day before going to bed and asked not to be disturbed. Pastors in the church were called to pray for him but all to no avail.

His wife, Temiloluwa, was said to have raised the alarm after noticing her husband’s unusual sleeping hours and could not reach him on the phone.

“He was not sick and did not complain of anything before the incident. Pastors in the church were summoned to pray for him, all to no avail,” a source added.

It is with a deep and heartfelt sense of loss, we announce the departure of our beloved son, brother, husband and father, Oluwadamilare Temitayo Adeboye, who went to be with the Lord on the 4th of May, 2021.

There have been conflicting media reports as to where and when late Pastor Dare Adeboye died. While some sections of the media have reported that he died in Abuja, some have reported that he died in his private residence in Eket, Akwa Ibom. But the most intriguing has been the report that the 42 year old man of God gave up the ghost right inside the Redemption Camp after he was flown in from Abuja with Vice Presidents, Osinbajo’s helicopter while battling to save his life.

Late Pastor Dare Adeboye was hugely loved by all members of The Redeemed Church of God. He was not just the apple of his parent’s eyes, he was also the darling of all at RCCG, especially the youths who consider him as one of the most dynamic youth pastors they had ever known. It’s being said that if you offended his mother, Mummy G.O. and you went to him to plead on your behalf, he would sacrifice the time to go see his mum for you and the issue would be settled. Same with his father, Daddy G.O.

He was indeed a humble, respectful and compassionate man.

His life was well lived as he served the Lord without reserve, giving effortlessly and leading fearlessly. He was crowned by the Lord with blessings of 3 seeds and a beautiful wife.

Though shaken, our anchor remains Jesus Christ in whom we have the assurance that we will one day meet in a place where there is no pain.

It is the wish of the family to be granted privacy at this moment and that prayers be offered on their behalf.

Dare’s last message before he went to be with the Lord was titled: God Does Not Need A Visa Before He Visits You.

In his message, he said God can visit you whenever he wants.

God does not need to knock on the door to enter your home. Weeping is associated to darkness. Darkness breeds sorrow, darkness, tribulations. But,when light comes, there is joy,peace, satisfaction.

He sighted the example Hannah in 1st Samuel 1, Hannah is the first wife of  Elkanah,while Pelinnah was the 2nd wife, but Hannah was barren.

For this reason Hannah was sorrowful,because Pelinnah the 2nd wife had children and she is  fond of mocking Hannah.

Hannah prayed to God and make a vow to God and God answered the prayers by giving her a son (Prophet Samuel) because God visited her.

The communion service with the theme Overflowing Blessings commenced at the usual Redemption Camp ground on Thursday May,7th 2021.

Pastor Adeboye was not physically present for the communion service,his sermon was virtual, due to the death of his son Oluwadamilare.

We pray God will console the Adeboye family and RCCG church at this time of trial.

The righteous man perishes [at the hand of evil], and no one takes it to heart; faithful and devout men are taken away while no one understands that the righteous person is taken away [to be spared] from disaster and evil.

Leke also shared Dare’s pictures on his Instagram page and he posted on Friday 7th, 2021 about his brothers favourite colour. He said.

His favourite colour was Blue,but did all with a royal standard of purple.

Several Nigerians took to social media to express their shock and sent prayers and condolences to the Adeboye family.

How Pastors Struggled To Revive Pastor DARE ADEBOYE was last modified: May 12th, 2021 by City People

What Every Muslim Must Do At LAYLATUL QUADRI