How People Mocked Me For Being Barren For 20 Yrs – LAGOS Celebrity Lady, Alhaja TOKUNBO AGBEKE 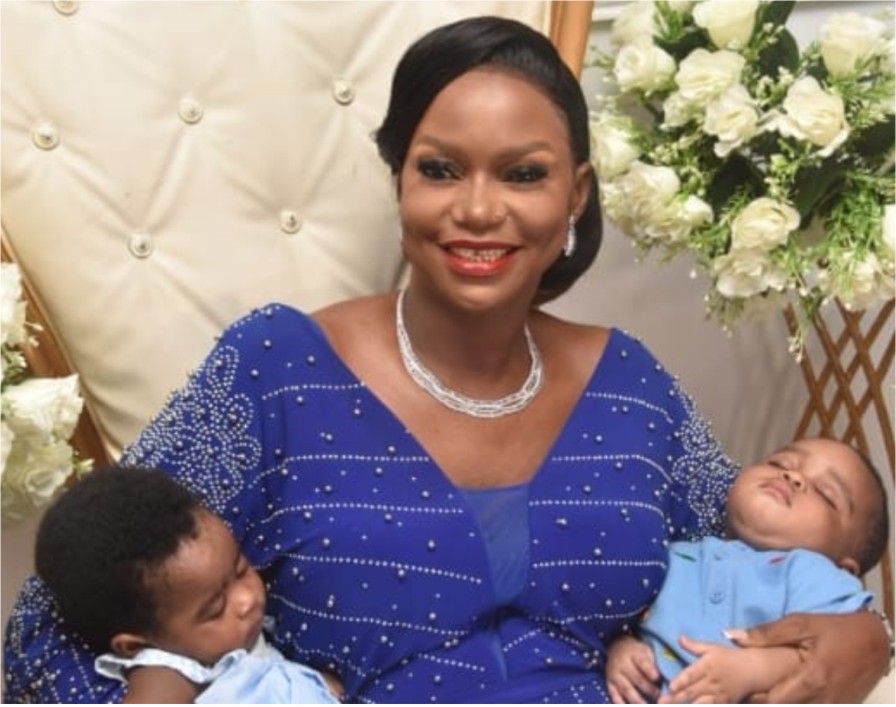 Alhaja Tokunbo Agbeke is a beautiful and strong woman, a successful clothier, and the CEO of Funtok Clothing. Alhaja Tokunbo Agbeke and her husband had every reason to be joyous on Saturday, 23rd July 2022. It was a day that had her on her feet with broad and elegant smiles on her face. It was the naming ceremony of her twins, Prince Ayinde Abdullateef and Princess Ayinke Lateefat.

They are the bundle of joy that made all friends and family gather at the Iceland Civic Centre, Egbeda, Lagos.

It was an event that had over 100 celebrity women in attendance. Royalties such as HRH Oba Kamorudeen Ajiboye Sanni (The Olowu of Owu Loyanland) representing Olokuta of Osun State and many others. Even celebrity musicians were not left out in the joyous occasion. Alhaji Alabi Pasuma and Saoty Arewa were the turning point of the event. In an interview with City People’s reporters, Salisu Nurudeen and Damilola Akande, Alhaja Tokunbo Agbeke reveals the many ordeals she had passed through in her 20 years of waiting for a child. Read excerpts.

What advice do you have for those waiting as you have gone through the phase?

What I would tell them is not lost hope because it is like the words of a friend of mine who came to congratulate me. She told me that when she heard I had delivered, she had suspected something when she stopped seeing me on social media not knowing that I was pregnant. She told me that now she knows she cannot lose hope and that she also can still give birth. I told her there is nothing like it is finished, it is all God’s timing and all she should pray for is that her time comes closer. Everyone’s timing is different and all you have to do is to keep praying. There is no barren in God’s house it is assured that we will give birth. So I advise those waiting on the Lord to keep seeking God’s face and not lose hope or transfer aggression to other people’s children. People like that should in fact be a mother to other people’s children so that they can keep reminding God of what thing are doing.

That was how I kept telling God. ‘I am taking care of other people’s children, God I want to have mine too’. I have been insulted that I help people wash plates, I have seen those same people come in here today to set up this place this morning.

How many years did you wait to have your own children?

It has been 20 years, and I was lucky to have gotten married while I was preparing to enter the university. He even assured me that if I get pregnant,  I will continue schooling since it’s the university. But he did not wait, you know when a man’s parents after 5 years of marriage start pressuring us. After that I met someone else, he did not want to leave me but later he also left with the excuse of travelling. I met another person who later confronted me telling me I sold my womb, one even said I used my womb to do money. I asked him how I used my womb for money because, at that time, I was using 2 cars so I wasn’t even all that rich. So, I started living my life in a way that anytime I started dating and the man started pressuring me for a child, I leave them. Don’t stress me, because when one is stressed about childbearing one can commit suicide.

I have thought about things like that before. I have gone to Lagos and have thought about parking my car on the Third Mainland Bridge and jumping into the sea. I thought if I jumped into the sea, I won’t be seen anymore or called barren. I have also thought about drinking Sniper but I kept reminding myself that if I stay alive, God can still answer me. I had an agreement with myself to keep waiting till when I am 55 then I will end it all. I just thank God that now, I have a reason to celebrate.

How People Mocked Me For Being Barren For 20 Yrs – LAGOS Celebrity Lady, Alhaja TOKUNBO AGBEKE was last modified: August 9th, 2022 by City People

Many Things Life Has Taught Me @ 90 – Prince A.T. ANIMASHAUN