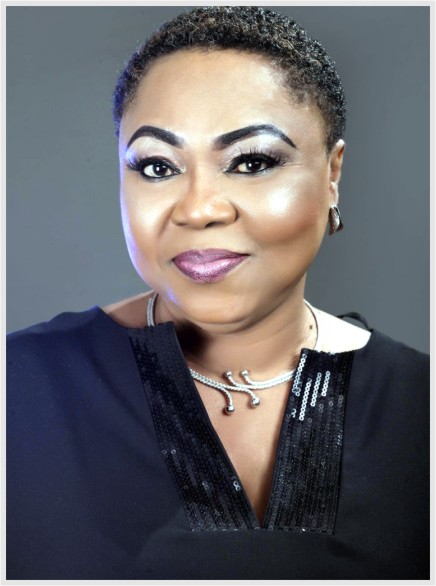 +Why Many Celeb Women Go For Her

Sometimes her voice could be mistaken for that of a man and her music for the popular King of juju music, King Sunny Ade. But for Owambe lovers, Ayo Balogun is one of the most sought after female juju musicians right now, especially the women, they don’t joke with her. Her rhythm is steady and the music is cool. Though a woman, she has been able to captivate her audience with her sonorous voice that cannot be ignored. She has graced many celebrity parties on and outside the shores of Nigeria. Her popularity has not dwindled and her fame has continued to rise amongst the party-goers. Unarguably, in 2021, she dusted the party scene with her performances back-to-back. Hardly will you see her not perform at a weekend or even weekdays, her calendar is always full.

Over a decade on the juju music stage, Mrs Ayotunde Kofoworola Balogun, nee Oguntade, has warmed her way into our hearts with her lyrics. Her beat has kept us swaying to her rhythms. Popularly known as Queen Ayo Balogun, the woman who blazed the trail for female juju musicians and without argument has emerged the most visible and most sought after among the lot.

One of the reasons why Queen Ayo Balogun has been able to cash out in the music industry is her sonorous voice, stagecraft, the lyrics of her songs and the compositions. She has remained unarguably the biggest female juju act in Nigeria. With a voice like a nightingale, Queen Ayo Balogun has wowed fans home and abroad with her deep songs. She doesn’t need to do too much, she has the energy, the lyrics flow and her inner beauty radiates wherever she goes.

2021 has been a very good year for her no doubt as she performed back-to-back through the year. She has been the only female juju artist who dominated all major parties and gatherings in 2021. Not only does she sing good songs, she has a way of captivating her audience and holding them spellbound. She can perform non-stop for over 6 hours and the audience will not get tired of her.

She was busy all through last year performing at different gigs, her last outing for 2021 was when Ipara Ijebu was shut down for Mama Victoria Taiwo’s burial, then she later played at night at Medusa Lagos, the traffic bar Lagos party, the Adamson wedding, Pa Solomon Oluwole’s burial in Shagamu, the burial of Oba Akinyemi in Iperu, Ayo Faturoti’s son’s wedding, Late Amosha Akinloye, Chief Omisore’s mum’s burial in Ile Ife, Barrister Ola Kukoyi’s father’s burial in Ijebu Ode, Hon. Olaleye’s chieftaincy party in Abeokuta, Ariyos party in Akure, Lore Aisida’s party and many others.

For several years, she was a member of the Cherubim and Seraphim ‘Ayo Ni o’ choir where she first cut her teeth as a musician. That was after her stint at the Music School on Martins Street, Lagos and correspondence courses from the London Royal School of Music. Even though many expected her to remain in her gospel music, she sprang a surprise by forming her own juju band. “I actually switched from gospel music to juju music to avoid rivalry with the church choir. You know by the time I started operating my own band, it would have looked as if I am competing with the choir”.

Though a celebrity in her own way, Ayo Balogun has been able to combine her career with the home front, dispelling the perception that women in showbiz don’t keep their homes. “I was an adult before I went into music. And this has helped me to control stardom and the homefront”.

Born in Ilesha, she spent her childhood in Ibadan and had her primary education there before moving to Lagos in 1972. She comes from a singing family, her mum sings soprano, she sings alto, and her younger brother sings tenor. They were all in the choir in the Methodist Church. She was actually raised in Methodist Church, Agbeni, in Ibadan, before she moved to the Methodist Church, Palm Avenue.

She attended Agbeni Methodist Church Primary School in Ibadan then had her secondary school education at Benevolent High School, Martins Street, off Ojuelegba. Later, she rounded off at Victory High School, Ikeja, and then proceeded to Diploma School of Music. She later took correspondent exams from the London Royal School of Music, which makes her a full-fledged musician.