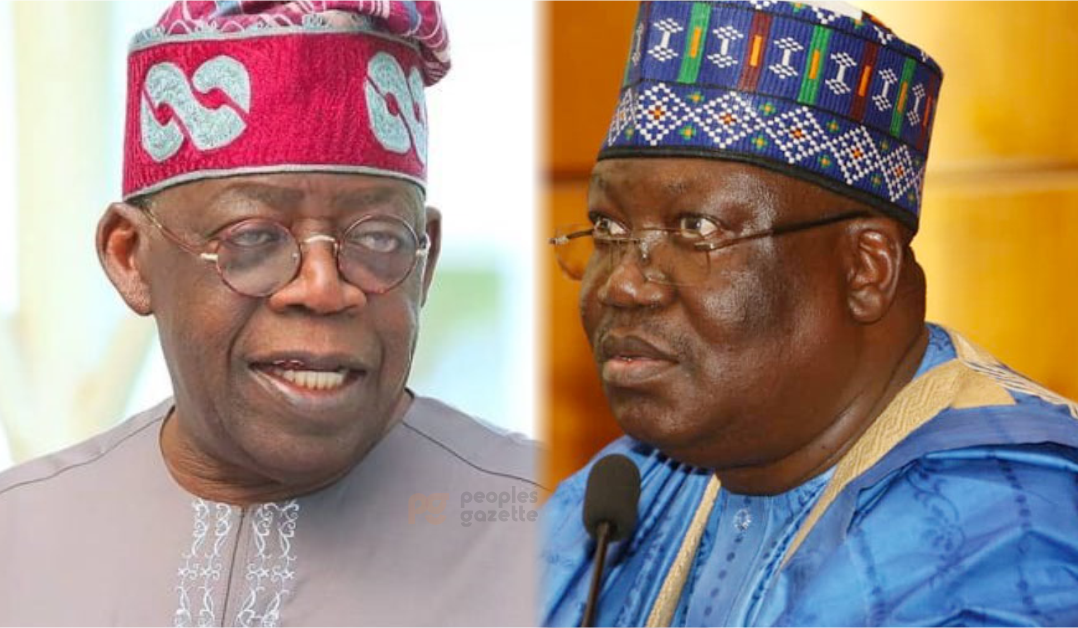 Ahmad Ibrahim Lawan is a very seasoned politician and Professor who serves as the President of the Senate. He represents the Yobe North Senatorial District in the Senate as a member of the All Progressives Congress.

He was one of those who contested for the APC presidential ticket but lost. This brought him into collision with the APC National Leader, Asiwaju Bola Tinubu who also contested and won the ticket.

In his Acceptance Speech, after winning the primary election, Tinubu expressed disappointment in the fact that  Lawan contested with him and he couldn’t hide his unhappiness because he had assumed that Lawan will be the last person to contest against him.

For about 2 minutes in his speech, Tinubu who is not known for dwelling on such issues mentioned how unhappy he is that Lawan, of all people, accepted the offer to contest knowing that Tinubu was already in the race.

City People gathered that what got Tinubu angry is the fact that despite the critical role he, Asiwaju, played in the coming to power of Lawan, the Yobe politician still came out to take him on, at the primary.

A close associate of Tinubu revealed how the APC National Leader spent a fortune to help Lawan realise his dream of becoming Senate President. He revealed how Tinubu activated his political structure to work in favour of Lawan and did the same at the House of Reps for Rt Hon. Femi Gbajabiamila. “It is not someone like Lawan that should compete with Tinubu.  he told City People. Tinubu put everything he has at Lawan’s disposal. He fought tooth and nail to ensure that Lawan won the election”.

City People gathered that Lawan has since apologised to Tinubu when they met and he has forgiven him. Both have since made up and have become allies again.

One of the things his coming out to contest has done for Lawan is to reveal how seasoned he is. Many did not know he has a rich profile, having been a Parliamentarian for decades.

It was not until he stood on stage at the APC primary that many got to know that Lawan is such an erudite and accomplished.

So, what sort of a person is Lawan? City People can tell you a  bit about him.

Lawan worked in the Yobe State Civil Service as an Education Officer in the state Ministry of Education in 1985 and 1986 before lecturing at his alma mater, the University of Maiduguri between 1987 and 1997. A university lecturer from Gashua, Lawan was first elected to the House of Representatives in 1999 to represent the Bade/Jakusko Constituency as a member of the All Nigeria Peoples Party. Lawan was reelected in 2003 before successfully running to become Yobe North Senator in 2007. After being reelected in 2011, 2015, and 2019 (as a member of the All Progressive Congress, successor to the ANPP), Lawan was elected the new Senate President with 79 votes cast to beat Senator Mohammed Ali Ndume with 28 votes after the inauguration of the 9th Nigeria National Assembly in 2019. It was his second attempt at becoming Senate President, with a notable failure to run in 2015.

At the APC presidential primary, he further revealed a lot about his accomplishments. “Tonight we are making history. Our great party, the APC is making history, next year 29th May 2023, your Excellency, your tenure would have been full cycled and by the grace of God it would be. This event is a special event for us to elect the next person that will fly the flag of our party in next year’s presidential election by the grace of God.

“Your Excellency, you have provided a great deal of leadership in governance and in the driving of our party. That’s why we are here. This administration from 2015 today, under your distinguished leadership, has done so much for this country and for the party.”

“You have laid the foundation, for whoever will emerge this night to fly the flag of our party to stand on such a very solid and strong foundation. And we are very proud of your achievement in the last seven years.”

“Your excellency has provided leadership for this party even when it will appear that we have difficulties that may seem insurmountable, the moment you stepped in, things become straightened up. And this is how APC will be now and always. It will remain strong because you have set it on a very string pedestal.”

“I am running for the office of the President of the Federal Republic of Nigeria because I believe that this party, has been built well around ideals that all of us here shared. Today we are proud that having sustained our economy that despite all the difficulties in the world, our economy is still experiencing growth.

Distinguished delegates, let me say that you are a special set of Nigerians who are saddled with the responsivity and task of electing the next president of our country.

My belief is that there cannot be any higher and known responsibility than electing the president that will lead this country in the next four years from 2023. I will therefore appeal to you, that you look very closely, and ensure that we elect someone who would ensure that the achievement of this administration so far is consolidated and others continue.”

“I am of the parliament. I come from the parliament. I am a parliamentarian. Having spent 23 years in the national assembly, having headed very strategic committees of Agriculture and Education. Having headed the very important constitutional committee. Having served as the Senate chairman of the committee of defence. Having served as the majority leader of the Senate, and serving as the president of the senate by the grace of God, I am eminently qualified.

Today’s president in the US, President Biden, was in the senate of the United States of America. President Obama was also a senator. I have acquired sufficient experience working very closely with Mr President, as the presiding officer, and chairman of the national assembly. I have learned a lot and by  the grace of God, if you elect me this night, I will continue and consolidate those massive achievements, Mr President and the APC administrations have achieved.”

READ ALSO: WHY MANY PDP MEMBERS WERE SHOCKED AT ATIKU’S CHOICE

How IJEBU Muslim College Was Founded 72 Yrs Ago

Meet The 5 Kings Who Rule IJEBU-IGBO…