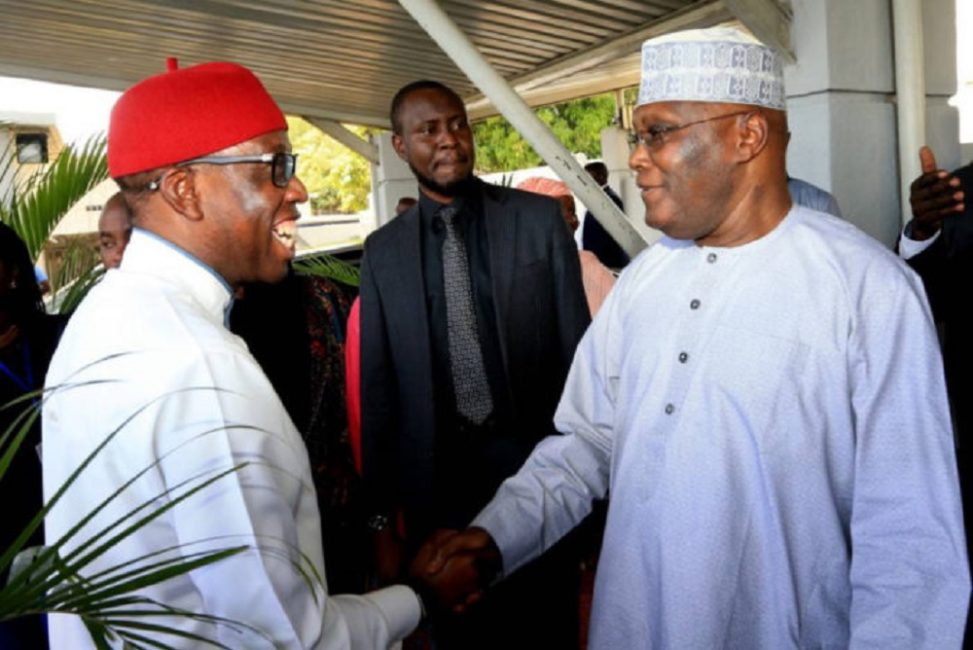 The presidential flag bearer of the Peoples Democratic Party (PDP), Atiku Abubakar, last week, announced Delta State Governor, Ifeanyi Okowa, as his running mate for the 2023 election, thus bringing a climax to the suspense and speculations that had attended the choice for weeks. Atiku’s choice of running mate was against the recommendation of the PDP National Working Committee, NWC, who had advised he picked Rivers State Governor Nyesom Wike.

The emergence of Okowa has caused mixed reactions among party members, especially those who don’t see the Delta Governor as a credible candidate who can influence voters in the south. It is also believed that Governor Okowa has betrayed the collective interest of the Southern region by accepting the offer to run as a vice-presidential candidate to Atiku.

The southern and middle belt leaders also said it is unfortunate that Okowa accepted the offer despite a warning to southern political stakeholders not to accept nominations as vice-presidential candidates if the presidency is not zoned to the south.

Southern and Middle Belt Leaders’ Forum (SMBLF) and the southwest and southeast governors met and deliberated on the need to have a significant representation in the forthcoming presidential elections and resolved that the presidency should rotate to the south.

They went further on several other occasions, to caution political stakeholders from the South, including serving and former governors, ministers, senators, etcetera, not to, on any account, allow themselves to be appointed or nominated as running mate to any presidential candidate, if the presidency is not zoned to the south and that we will work against such person or persons.

An elder statesman from the east, Edwin Clark also lend his voice and added that It is most unfortunate that the Governor of Delta State, Senator Ifeanyi Okowa who should know better, accepted his appointment as running mate to Alhaji Atiku Abubakar. The southern PDP said Okowa’s action is a betrayal of the trust reposed on him by his fellow southern governors.

A key member of the party who spoke to City People anonymously added that it is not a matter of loyalty to one’s political party, but rather an unpatriotic action, committed against the general interest of his State, Delta State, the Niger Delta region, and Southern Nigeria. “It is, certainly, also not in the interest of the nation at large,” he said.

Another source also revealed that Okowa almost lost the bid because of his political difference with a key figure in south-south politics, James Ibori, who is very close to Atiku. Ibori, an ally of Atiku, initially kicked against the choice of Okowa, owing to the disagreement between them over the PDP governorship primary in the state. In the primary, Ibori’s candidate, David Edevbie, scored 113 votes and lost to Okowa’s candidate, Sheriff Oborevwori, who scored 590 votes. Oborevwori is the Speaker of the state House of Assembly.

The development was said to have angered Ibori, who felt betrayed by Okowa’s opposition to his preferred choice as his successor. The former governor had while in the prison in the United Kingdom directed his supporters to ensure Okowa emerged as the party’s candidate and that he won the main election. He won the election, defeating Tony Obuh, the choice of then governor, Emmanuel Uduaghan. Further investigation showed that Ibori felt slighted with the way Okowa behaved and was of the opinion that the governor, whom he helped to power, was out to humiliate him.

Another challenge is the alleged burden of debt on his neck as Delta state governor. The Senate Deputy President, Ovie Omo-Agege, joined the ranks of those accusing Okowa of obtaining the facility from a bank to the tune of N150 billion. Omo Agege maintained that the governor took the loan hastily in anticipation of “petroleum subsidy payment/refund.”

“Without question, the N150 billion loan approved by the House of Assembly is an escalation of a very corrupt pattern of reckless borrowing by the Okowa administration to fund mystery projects or what Deltans now generally refer to as ‘audio’ or invisible projects.”, he said.

One other factor that the Delta governor battles with is his connection with the southeast. Ifeanyi Okowa has said he regards himself as an Igbo man from the South-South geopolitical zone of the country, but the Igbo people have a different opinion. The Igbos believe they were politically cut out of the hinterland for regions like Delta-Igbos, the Ikwerres of Rivers State etc. to benefit. It, therefore, means that Okowa may not scoop many votes from the southeast, who have already sealed their minds on the premise that Okowa has jeopardised the political future of the people from the southern part of the country.

Why Many PDP Members Were Shocked At ATIKU’s Choice was last modified: June 21st, 2022 by City People

Why LADI ADEBUTU Is In A Happy...