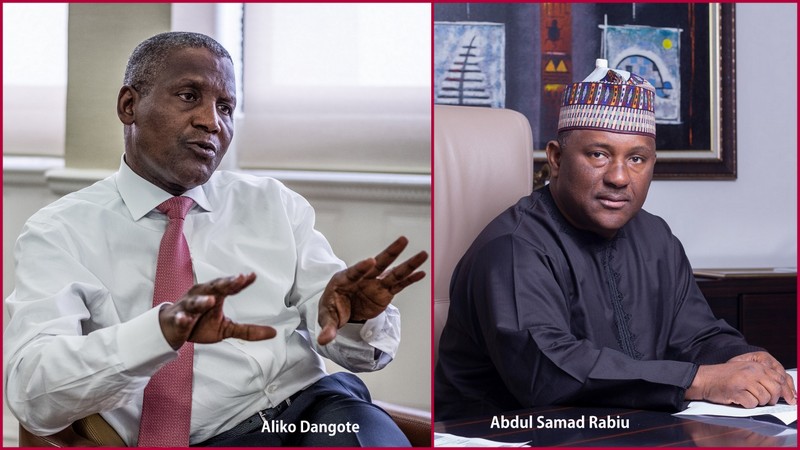 Alhaji Aliko Dangote and Alhaji Abdulsamad Rabiu are 2 big businessmen, who have many things in common. They do similar businesses. They are both from 2 big families in Kano. One is related to the Dantatas. The other is from the famous Rabiu family. Both are Billionaires. Both are big spenders. Both are philanthropists. They are well connected in the corridors power.

But despite all these similarities, both don’t see eye-to-eye. Expectedly so. Big Business has torn them apart. They are Competitors. And they don’t take competition lightly. “That explains why they are always fighting”, explained a source close to the duo. Aliko is Africa’s richest man according to Forbes’s estimate. Both are fighting over Compliance concerns, relating to the backward integration policy of the Nigerian Sugar industry, compounding an already messy dispute over the ownership of a Cement site.

Kano Governor, Abdullahi Ganduje, waded into the dispute between Dangote and BUA last week. In a statement last Thursday, Abba Anwar, the governor’s Chief Press Secretary, said the reconciliation meeting took place in Abuja, on Wednesday. In a joint letter to the Minister of Industry, Trade and Investment, Dangote Industries Limited and Flour Mills of Nigeria claimed that BUA’s Sugar refinery poses a threat to the local sugar industry.

BUA fired back saying Dangote and John Coumantaros,the  Chairman of Flour Mills, are calling to question the “authority of the president’s power and the diligence of the trade ministry.”

In the statement, Anwar said the meeting was held to end claims that the duo was in dispute over sugar business control in the country. He said after the meeting, the leaders of the two companies agreed to work together to supply enough sugar in the country. “They dismissed allegations that Dangote was planning to effect an increase in sugar price, thereby pressurising BUA to succumb to the increment. They described the allegation as baseless and lacking any iota of truth,” he said. “The meeting was seen as the zenith of other similar efforts to reconcile the two giants by the governor. Alhaji Aminu Alhassan Dantata  played the role of a father during the meeting.”

Present at the meeting were Niyi Adebayo, the Minister for Commerce, Trade and Investment; Aminu Dan-Agundi, a representative of the Kano emirate; Muhammad Nasir-Adam, Chairman of the Council of Kano Imams; and Adamu Panda, Chairman of Nigeria Export Processing Zones Authority (NEPZA).

Dangote, who is the Chairman of Dangote Sugar Refinery Plc, reportedly told the Minister of Industry, Trade and Investment, Otunba Niyi Adebayo, in a letter that the establishment of a Sugar plant by BUA International Limited, owned by Mr Rabiu in the Port Harcourt Free Trade Zone was out of tune with export laws.

“The mid-term review conducted by the NSDC (National Sugar Development Council) was clear in its conclusions – BUA has failed to invest substantively in local production or comply with its undertakings under its BIP,” Mr Dangote said in a letter jointly signed with John Coumantaros, chair of Flour Mills of Nigeria Plc, a fellow maker of the product. “BUA intend only on importing and refining raw sugar while claiming to be investing in developing sugar plantations to qualify for Quotas to import raw sugar.”

Relations between both men became frosty in June 2020 when BUA Cement, majority shares owned by Samad Rabiu, got a restraining order against Dangote Cement, where the Africa’s wealthiest man wields the majority stake, after the police invaded its 3 sites in ObuOkpella, Edo State.

BUA Group said Dangote Cement initiated the action. “BUA takes serious exception to the ludicrous claims by its two major competitors that it aims to circumvent the BIP of the sugar industry – an initiative in which it has invested billions of Naira and is almost nearing completion,” it said in a rejoinder to the sugar policy contravention indictment.

“To thus claim that the BUA PH export focused refinery in an Export Zone will amount to an undermining of the NSMP (National Sugar Master Plan) is false.” President Muhammadu Buhari gave the go-ahead for developing the Port Harcourt plant, according to Mr Rabiu.

Let’s tell you a bit of Dangote Group which was established as a small trading firm in 1977, the same year that  Dangote relocated to Lagos to expand the company. Today, the group has become a multi-trillion-naira conglomerate with many of its operations in Benin, Ghana, Nigeria, Zambia and Togo. Dangote has expanded to cover food processing, Cement manufacturing, and freight. The Dangote Group also dominates the Sugar market in Nigeria and is a major supplier to the country’s soft drink companies, breweries, and confectioners. The Dangote Group has moved from being a trading company to become the largest industrial group in Nigeria, including Dangote Sugar Refinery, Dangote Cement, and Dangote Flour.

In July 2012, Dangote approached the Nigerian Ports Authority to lease an abandoned piece of land at the Apapa Port, which was approved. He later built facilities for his flour company there. In the 1990s, he approached the Central Bank with the idea that it would be cheaper for the bank to allow his transport company to manage their fleet of staff buses, a proposal that was also approved. He also donated money to the Nigeria Sport Ministry to renovate the National Stadium, Abuja.

In Nigeria today, Dangote Group with its dominance in the Sugar market and refinery business is the main supplier (70 percent of the market) to the country’s soft drinks companies, breweries and confectioners. It is the largest refinery in Africa and the 3 largest in the world, producing 800,000 tonnes of sugar annually. Dangote Group owns salt factories and flour mills and is a major importer of rice, fish, pasta, cement, and fertiliser. The company exports cotton, cashew nuts, cocoa, sesame seeds, and ginger to several countries. It also has major investments in real estate, banking, transport, textiles, oil, and gas. The company employs more than 11,000 people and is the largest industrial conglomerate in West Africa.

READ ALSO: WHY IT HAS BEEN DIFFICULT FOR THE FULANI MAFIA TO STOP TINUBU