How The Ooni of Ife Dazzled Everyone At Olojo Festival 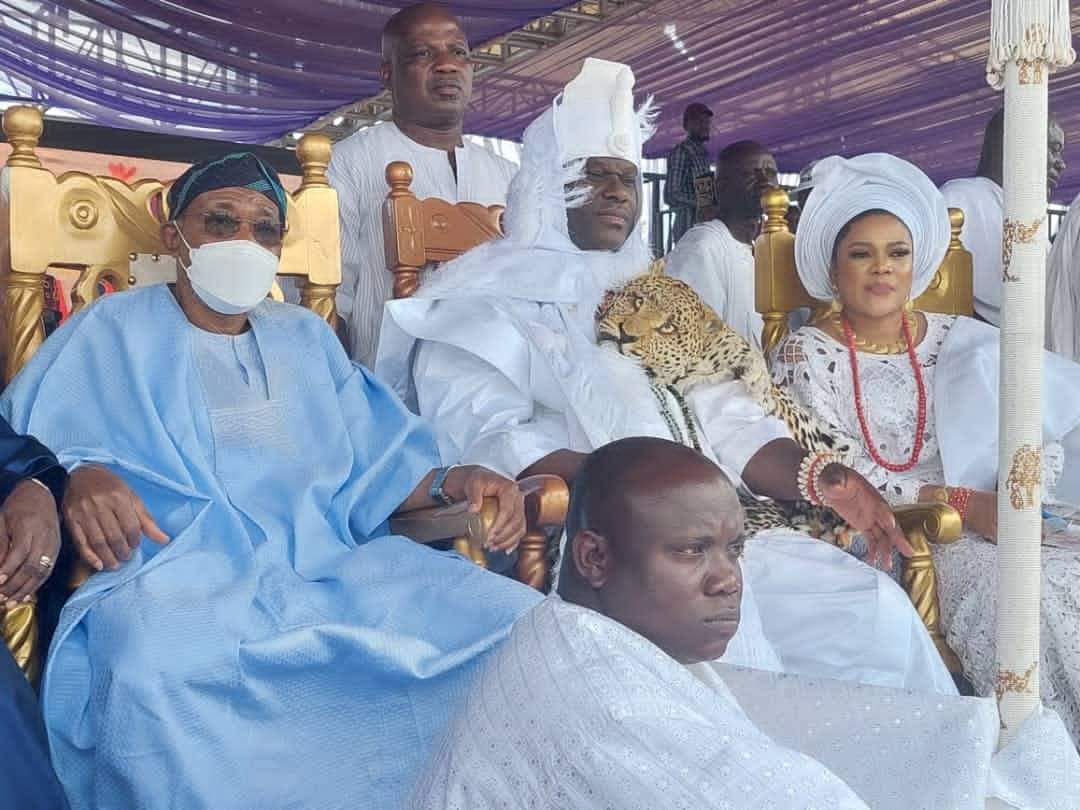 This year’s Olojo Festival may have come and gone. But it has left behind fond memories of a great and colourful event. And the Chief Host, the Ooni of Ife, Oba Enitan Adeyeye dazzled all the attendees with his royal glamour. Everyone had great fun.
At the event, President Muhammadu Buhari applauded the peace initiative of the Arole Oduduwa & Ooni of Ife, Ooni Adeyeye Enitan Ogunwusi Ojaja II, describing him as a major stakeholder responsible for the peace and tranquility currently being enjoyed in Nigeria.

He was represented by the Minister of Interior and former governor of Osun State, Ogbeni Rauf Aregbesola. President Buhari made the commendation last Saturday before the mammoth crowd that gathered at the Ile Oodua Palace of Ife to celebrate the annual Olojo festival in the ancient city with the African foremost monarch, people of the kingdom and the Oduduwa race worldwide, advising that Nigerians should be sensitive to their security and not leave everything for security agents.

“We are collectively responsible for the provision of security. The government will do its own while the people should also support the security agencies. We should report any suspicious move or person in our environment to the security agents.”

On the annual festival, the President recalled that Olojo and other festivals in Yoruba land in the olden days are used to showcase harvest and productivity in the agricultural sector and not just for fun or merriment.

“Olojo festival was an event in the olden days to showcase farm produce, profits made in farming and agriculture at large.

“It will gladden my heart if Nigerians could restore the old glory of farming; this Olojo festival too should also bring back the old days of showcasing farm produce, hard work and good character.

“The festival should not be for merriment alone. Merriment should come after work. There should not be merriment without work. Working is the antidote to poverty.” Aregbesola said.

In his statement, Ooni Ogunwusi who doubles as Co-chairman, the National Council of Traditional Rulers of (NCTRN) reflected on the economic and security state of the nation with a vow to remain steadfast and committed to preserving the Oduduwa legacy of festivals like Olojo to inspire the economic and security solutions for Nigeria and Africa using cultural tourism as veritable tools.

“Anchoring the mantle of the Olojo Festival is the ideal fit for mending our nation’s brokenness. When we turn on the news, read the newspaper, or look at our social media feeds, we see brokenness. We are a broken people in a broken country. We are under broken political systems, governance, education, healthcare, security, religion, etc. Through the lenses of our existence, we don’t have to look far to see brokenness which is reflected in our interactions, conversations, sense of recognition and support for our young people.”

“Olojo dispenses the rich nuances of the past as well as the unforgettable contributions of our forefathers to our existence and greatness.”

“At this historic intersection, our traditions and heritage have given birth to modernity and will continue to lighten our paths from the darkness. I’m steadfastly committed to preserving, inspiring, and distinctively igniting a desire for the sustenance of their age-old meaning as they continue to serve as our precious treasures,” Ooni said.

Represented by his Deputy, Benedict Adegboyega Alabi, the Governor said, “As a government, we remain committed to our electioneering promises and we won’t renege on our pledge to make life better for all.”

Similarly, Nigeria’s Ambassador to Jamaica and the Caribbean, Ambassador (Mrs.) Maureen Tamuno, stated that a lot of people in the diaspora particularly in the Caribbean have traced their roots back to Nigeria and festivals like Olojo will be instrumental to reuniting them with their kinsmen.

The event which was witnessed by numerous traditional rulers, chiefs, business tycoons, political office holders, international tourists and observers from countries like Brazil, Cuba, Jamaica and America, had the Ooni who was flanked by his beautiful queen, Olori Mariam Ajibola Ogunwusi and members of the royal (Giesi) family at the centre of the crowd.

Olojo festival connotes a strong indication of God’s creation and the day of the first dawn on earth, it is celebrated annually in Ile-Ife by all descendants of Oduduwa.
Olojo festival is one of the most popular and respected festivals in Yorubaland, which is celebrated in honour of ‘Ogun’, the god of iron.
This year’s edition was tagged, Culture Tourism: The Genesis, and was held between September 23 and 26, 2022.
It will be recalled that the Ooni of Ife,as stipulated by tradition, went into seclusion on Monday,19th September 2022, before returning to the palace on Friday, September 21, after some women from the town had earlier swept the palace, which symbolised sanitisation from evil.
During the seclusion, the Ooni communed with the ancestors and prayed for his people.
At the event, Ooni of Ife stepped out with his new beautiful wife, Olori Mariam Ajibola, looking resplendent in her outfit.

It was a classy event that had a lot of dignitaries in attendance, like the Minister of Interior, Ogbeni Rauf Aregbesola, who represented the President, Major General Muhammadu Buhari, Osun State Deputy Governor, Benedict Alabi, as well as a popular socialite and the Iyalaje Oodua, Toyin Kolade. Others are Yeye Lara Fashola-Fanimokun, Erelu Abiola Dosumu, Ooni’s 3 Sisters, Members of Egbe Yeye Gbobaniyi, The Alara of Ilara, the Sooko of the Source and veteran Actor Lere Paimo.

How The Ooni of Ife Dazzled Everyone At Olojo Festival was last modified: September 27th, 2022 by Nurudeen Salisu

Countdown To The Celebration Of BONIX 30...